After much anticipation and an unexpected two-day delay, NASA and the European Space Agency's (ESA) Solar Orbiter finally launched on Sunday, February 9 at 11:03 p.m. Eastern.

Footage captured by NASA and the ESA reveal the spacecraft's fittingly spectacular send-off into deep space.

Solar Orbiter is on its way to transform our knowledge of the Sun. Once it is in place some 0.27 AU from the star — the closest any man-made object has ever gotten to the Sun — it will give us an unprecedented look at the fiery orb all life on Earth depends on.

To help it on its way, the Solar Orbiter craft hitched a ride onboard a United Launch Alliance Atlas V 411 rocket from Space Launch Complex 41 at Cape Canaveral Air Force Station in Florida.

In a stunning video, NASA and ESA showcased the highlights of their scientific achievement. The video captures the moment the Atlas rocket takes off and initial acceleration.

NASA and the other space organizations involved in the launch took to Twitter to celebrate, posting incredible pictures of the moments before and after the innovative craft took off.

This image shows the Solar Orbiter's host craft, the Atlas V 411 rocket, in a glorious blaze traveling through Earth's atmosphere and out into space. After it took off from the United States, the rocket quickly reached Mach 1 speed — faster than the speed of sound.

The Atlas Centaur, which carries the Solar Orbiter, separated from the rocket shortly after lift off. About an hour after the launch, ESA announced on Twitter that the Solar Orbiter is now flying solo in deep space. Soon it will spread its wings by deploying the solar array.

What is Solar Orbiter going to do?

It will take the spacecraft around two years to reach its target vantage point on Sun, using the gravitational boost of Earth and Venus along its journey.

The Solar Orbiter aims to answer some of the unresolved questions scientists still have about the Sun. Among them: What drives solar wind? How does the Sun’s magnetic field affect its solar activity? And how does the star influence the Solar System, including our own planet?

To answer these questions and more, the spacecraft will travel outside of the confines of the Solar System and peer down at the Sun, imaging the star from a high altitude. The Solar Orbiter will be the first human mission to capture an image of the Sun’s magnetic poles, which scientists believe drive solar wind.

The spacecraft carries 10 scientific instruments onboard. Six of them are remote sensing, capturing images of the Sun, while the remaining four are in-situ instruments, which will measure the surrounding environment around the spacecraft comprised of solar wind, plasma and particles.

The Solar Orbiter joins another spacecraft orbiting the Sun, NASA’s Solar Parker Probe, which launched in August, 2018. The probe is designed to dive into the Sun’s atmosphere in order to collect data on solar wind and the star’s magnetic field.

You can watch the full replay of the launch — from clean room to blast off — in this video from the ESA. 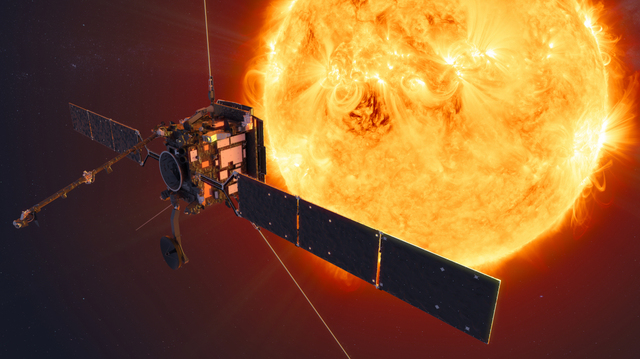 Looking ahead, the ESA also announced another upcoming mission to the Sun, a pair of satellites that will cast an artificial solar eclipse, or a shadow, in order to peer into the outer atmosphere of the Sun which is slightly dim.

These missions are set to open up a new era of heliophysics, or the study of the Sun, and how our host star affects Earth and the rest of the Solar System. We have a little time to wait until then, however — Proba-3, as the new mission is currently known, isn't planned for launch until mid-2022.