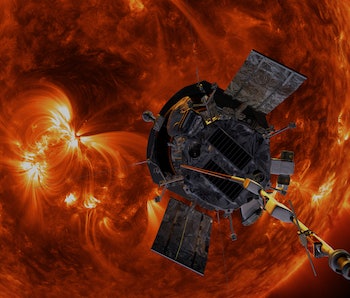 On August 12, 2018, a small spacecraft the size of a car started its incredible journey to the surface of the Sun. NASA’s Parker Solar Probe is designed to plunge into the solar atmosphere, at a distance of around 4 million miles from the Sun’s surface — closer than any other spacecraft has ever gotten to our star.

The probe may resolve some of the many mysteries surrounding the Sun. Among the questions it could answer: Why is the Sun’s outer atmosphere much hotter than the surface? Why does the Sun’s magnetic field switch every 11 years? And what propels the flow of charged particles from its atmosphere known as solar wind?

Scientists are finally starting to get some answers.

Although the mission is still in its infancy, initial observations by the spacecraft have already given scientists unprecedented insight into the origin of solar wind and how it is affected by the Sun’s magnetic field.

“The data we’re seeing from Parker Solar Probe’s instruments is showing us details about solar structures and processes that we have never seen before,” Nour Raouafi, Parker Solar Probe project scientist at Johns Hopkins University, said in a statement. “Flying close to the Sun — a very dangerous environment — is the only way to obtain this data, and the spacecraft is performing with flying colors.”

In series of four studies, published in the journal Nature this week, researchers lay out data collected from the probe’s first two solar encounters. The analyses reveal the source of the elusive slow solar wind, and show how changes in the magnetic field accelerate solar wind speed.

The data was collected in late 2018 and in March and April of 2019, when the spacecraft was around 0.25 Astronomical Units (AU) away from the Sun. An astronomical unit is the approximate distance between Earth and the Sun, which is around 93 million miles — so the probe was just 23,250,000 miles from the Sun. That distance may seem, well, astronomical, but it is the closest any human-made object has ever come to our star.

In one study, researchers focused on the probe’s observations of solar plasma and discovered that as the Sun’s magnetic field reverses, it increases the speed of the solar wind leaving the core of the Sun.

A second study looked at high-energy ions and electrons being ejected by the Sun. These are more abundant near the the outermost part of the Sun’s atmosphere. The findings show that these particles are accelerated by sudden eruptions of radiation, or plasma, from the corona itself.

Scientists have long sought to understand the Sun’s 11-year magnetic cycle, in which the South and North poles of its magnetic field essentially switch spots. Observations suggest that at the end of the solar cycle, there is an increase in the Sun’s activity, with more high-energy flares and radiation shooting out into interstellar space — solar wind.

Past efforts to study solar wind have been done at a distance of one AU. But the Parker Solar Probe will inch closer and closer to the Sun with each orbit, eventually reaching a distance of 4 million miles of the Sun’s surface — offering unprecedented new details about this mysterious process.

The tiny probe carries a host of instruments onboard to measure solar wind, particles, magnetic fields, solar radio emissions, and the structure of the corona.

By getting a better look at the Sun’s corona, scientists hope to solve another of the biggest solar mysteries. For years, they have been baffled by the extreme temperatures in the corona, which can rise to one million degrees Celsius. This is hotter than the Sun’s surface — at a relatively cool 5,700 degrees C.

The solar probe mission will also help scientists make more accurate predictions of space weather. Space weather refers to solar wind and ejections of matter from the Sun’s corona, both of which can have a direct effect on satellites, and, more importantly, on human spaceflight.

By getting closer and more accurate measurements of the components that make up space weather, scientists are hoping to build better weather-forecasting models to predict if an unusual amount of radiation is going to shoot out from the Sun before it hits our instruments.

The probe is only on its third orbit and some 15 million miles from the Sun’s surface. If these new data are anything to go by, there will be many more exciting discoveries from the craft as it inches closer to the Sun over its remaining 21 orbits.

More like this
Science
6.30.2022 10:45 AM
These 5 objects could be Webb's full-color first images
By Kiona Smith
Science
9 hours ago
Why the Webb Telescope will stare at 3 baby star-making factories to unlock cosmic mysteries
By Doris Elín Urrutia
Science
7.5.2022 11:30 AM
Space scientists unveil new evidence icy ocean worlds can host life
By EVAN GOUGH and Universe Today
Related Tags
Share: