How to save the world

“there is no way to curb plastic pollution without reducing production.” 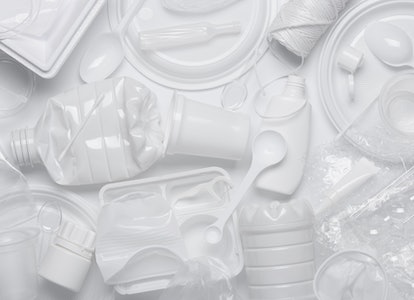 Roughly half this plastic is single-use, meaning the products are used once or twice before they are dumped in a landfill, burned in an incinerator, or, least likely of all, recycled in a facility.

Single-use plastics can harm animals and choke our oceans. Microplastics — tiny pieces of plastic debris — from single-use products like candy wrappers and takeout containers have infiltrated every corner of the globe. Worst of all, plastic can take centuries to decompose, so it will be with us for a very, very long time.

Earlier this month, in Nairobi, Kenya, representatives of more than 170 nations gathered at the UN Environment Assembly (UNEA-5), announcing a mandate to negotiate a legally-binding treaty to end global plastic pollution. The treaty will be finalized in 2024.

The treaty mandate even has the staunch backing of some of the world’s biggest food and beverage companies, whose products heavily rely on single-use plastic packaging. Coca-Cola, Danone, Colgate, Nestle, P&G, Pepsi, Unilever, and Walmart signed a statement backing a treaty before the meeting in Nairobi even took place, giving a potential agreement valuable corporate involvement.

As the pressure mounts on corporations to reduce plastic pollution, a global agreement could be our best bet to reduce the devastating impacts of plastic on environmental degradation and human health — but only if it’s done right.

“There are fewer and larger threats to human health and well-being than our ongoing reliance on petrochemicals and our production of plastics,” Jane Patton, Campaign Manager of plastics and petrochemicals at the Center for International Environmental Law, tells Inverse.

So, what would a truly comprehensive, effective treaty on plastic pollution actually look like, and would it compel corporations to cut plastic out of their operations?

Inverse spoke with environmental advocates, scientists, and food and beverage experts — all of whom are invested in ending plastic production — to answer what they think should be included in the treaty.

These interviews have been edited and condensed for clarity.

Claire Arkin, Global Communications Lead for GAIA: Global Alliance for Incinerator Alternatives, a global network that supports local environmental justice efforts around the world to end waste pollution. GAIA has been extensively involved in discussions around the treaty mandate.

Only 9 percent of plastic has ever been recycled, and plastic production is expected to quadruple by 2050 without serious intervention. Plastic is also slated to take up 10 to 13 percent of the global carbon budget by 2050.

This treaty must include plastic reduction targets, focusing first and foremost on phasing out unrecyclable plastic. This will not only go a long way towards solving the plastic pollution problem but the climate problem as well since 99 percent of plastic is made from fossil fuels. Plastic reduction strategies should also include addressing the toxic burden of plastic by phasing out dangerous additives and fillers from recyclable plastic and establishing a fund for the remediation of toxic pollution associated with plastic.

Take the Montreal Protocol, which phased out the production of toxic gases that endangered our ozone layer. The same could be done for plastic in this treaty.

Companies will likely support the agreement. However, scientific research on such commitments reveals the importance of definitions and measurable targets. In other words, the treaty’s success depends on the details, which we don’t know yet.

The plastic agreement negotiations will first decide what should be included in the life cycle of plastic. This poses the risk that the agreement will focus more on waste management. Waste management and recycling are really important and global efforts are needed to build up the appropriate infrastructure all over the world. But waste management can only mitigate the effects of plastic consumption, not the cause. To address the cause, we need to move away from the throwaway mentality and find solutions for the single-use plastic consumption.

If you ask companies, they might say that they are already minimizing plastic consumption as they use more and more recycled materials and other alternatives to crude oil-based plastic. But that is a pure material perspective. The industry in particular needs reusable alternatives. But there are no easy answers for this.

Let's take the single-use beverages plastic bottle as an example. Many countries, especially in the EU, are introducing deposit systems for these bottles. The consumer returns the empty bottle and gets the deposit back. This is a very good solution to prevent uncontrolled disposal of these bottles and to increase their recycling. But it does not solve the cause of the single-use problem. Refillable bottles also have ecological disadvantages, such as higher transportation requirements. However, these disadvantages can be compensated with the appropriate design of such reusable systems, for example, if all manufacturers use a shared bottle that is distributed locally in order to minimize transport efforts.

Jane Patton, Campaign Manager of plastics and petrochemicals at the Center for International Environmental Law. Patton also coordinates the civil society stakeholders task force on the plastic treaty and was present for discussions of the mandate in Nairobi.

Recycling will not be enough. There is no way to curb plastic pollution without reducing production. There is no way to fundamentally address the number of plastics that are accumulating in the environment and in landfills and that are going through incinerators and the minuscule amount that's being recycled. There is no way to curb the impacts of emissions from those plastics without changing the way that we make them and use them. Both countries and companies are going to have to put hard limits on the number of toxic plastics that can be produced within their borders or by their entities annually.

Right now, plastic is the cheapest and most convenient material to package. But there is nothing in the world that says my deodorant has to come in a single-use plastic container.

And that's exactly what companies and countries are going to have to do in light of a new plastics treaty. Oh, we can't have widespread single-use anymore? Let's come up with a different material that is refillable — that is reusable. Take the deodorant example. When I buy deodorant, I can get it in a container that is reusable and I can avoid single-use packaging entirely. Because when I'm done using my deodorant roll-on, I return it to the company and they clean it and refill it or they sell the refills and I can just stick it in the stick myself.

Conrad MacKerron, Senior Vice President of As You Sow, an organization that harnesses corporate responsibility and shareholder power to effect lasting change on environmental health and other issues.

If the final treaty includes restrictions on plastic production, use, or design—which we hope it will— then it will have an impact on consumer goods companies. Companies are already moving to reduce virgin [new] plastic use. We filed 10 shareholder proposals last year asking major brands to reduce total plastic or virgin plastic use and got agreements with five of them to reduce virgin plastic use — Keurig, Dr. Pepper, Mondelez International, PepsiCo, Target Corp., and Walmart.

The plastic pollution crisis has shown the world in shocking detail that we can’t adequately manage the amount of single-use plastic currently being produced. About 40 percent of plastic is improperly disposed of, meaning it is neither recycled nor sent to a landfill, but is burned or escapes into the environment. Until businesses and governments globally can prove that they can reduce and eliminate plastic waste through far more effective recycling methods, the amount of plastic being produced needs to be reduced. We hope the treaty will require a reduction in plastic use at least in line with the one-third cut in demand recommended by the Pew Charitable Trusts’ ‘Breaking the Plastic Wave’ report. This was a landmark report that was the first to present a comprehensive plan for how to reduce plastic pollution by 80 percent by 2040.

INVERSE: How did Boxed Water move away from plastic in its packaging? Is its plant-based packaging model really scalable for bigger food/beverage companies who currently rely much more on plastic?

ROBERT KOENEN: The motivation behind Boxed Water's™ launch in 2009 was to be the first real alternative to single-use plastic water bottles. While we are much better than plastic bottles and aluminum cans, the plastic cap and thin carton lining were areas to improve. We've always hated sourcing our caps with petroleum-based plastic but never found a good substitute.

It was a wake-up call that we need to push sustainable technology rather than wait for it. We worked closely with our suppliers to find a renewable substance that could be transformed into plastic. We found through the paper industry that there is a lot of tree pulp waste. Our suppliers were able to find an innovative way to make caps and our carton lining out of tree oil. We can now boast that 92 percent of our packaging is made from renewable materials — the highest in the industry. And yes, it is scalable. Right now it may be more expensive to use renewable materials until more companies scale, but consumers, especially younger consumers, are willing to pay a small premium for Earth-friendly options.

More like this
Science
Feb. 1, 2023
7 Years Ago the World Agreed to Slow Down Climate Change — But a New Report Shows an Uneven Future
By Tara Yarlagadda
Science
Feb. 5, 2023
The Plague Is Still Here — And It Could Infect Your Cat
By Tara Yarlagadda
Science
Jan. 24, 2023
The Doomsday Clock is now at 90 seconds to midnight — here's what that means
By Kiona Smith
LEARN SOMETHING NEW EVERY DAY.
Related Tags
Share: