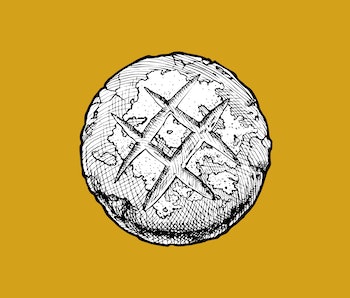 Tracy Wilk, a chef at the Institute of Culinary Education in New York, has found her skillset surprisingly in demand during this pandemic.

Wilk's a baker, and during the ongoing period of self-isolation in many areas of the United States, people have turned to baking for physical and mental sustenance.

Specifically, Americans looked to the sourdough starter: Google Trends data has shown a dramatic rise in searches for the term since mid-March, the beginning of Covid-19's rapid spread.

"I think of it a lot like tending to a house plant," Wilk says. "It becomes a part of your home, and you have to feed it, care for it, and, with time, something amazing will come out of it. I think it’s a great way to practice self-care."

What is a sourdough starter?

A sourdough starter is a mixture of flour, water, salt, and microbes. These microbes are yeasts and lactic acid bacteria. Sometimes, acetic acid bacteria makes an appearance, too.

You typically can buy a starter from a store (or Amazon.) You can try to make your own if you have flour, salt, and water at home. You don't even necessarily need to buy yeast, if you're willing to put in a bit of time.

While some recipes call for adding yeast to the mix, yeast can enter the process naturally -- with a bit of patience.

"Nothing about sourdough is quick," Wilk tells Inverse.

How do you make a sourdough starter?

All one really needs to start a sourdough starter are three ingredients. If you add these together, the microbes will come:

Typically, the flour-to-water ratio is about one-to-one. You mix the flour and water, then over time, "feed" it more of each. After a few days, when there is plenty to work with, you'll continue feeding — but throw away half of it, to keep it fresh and avoid any spoiling. Recipes vary, but one option is to add 4 ounces of water and flour every one to five days.

Soon, the mixture can be seen beginning to bubble up — that's how one knows the microbes are there and are at work, breaking down sugars and flavoring your future sourdough.

Why are lactic acid bacteria and yeast so important?

The tiny, living organisms that make up these ingredients add flavor to the starter, and allow the starter to rise.

Yeast also breaks down sugar from the flour into ethanol and carbon dioxide. This process causes the bread to fill with those air pockets that give it a fluffy texture.

Microbiologist Anne A. Madden, Ph.D., tells Inverse that lactic acid bacteria gives sourdough its tart flavor, while extending the lifespan of the bread by protecting it from spoiling.

Where does yeast come from, anyway?

Like other fine particles floating in the air, yeast is all around us. It's a tiny, living organism that we can't see, and there are thousands of different species.

Many different types of yeast live in our environment — they can live inside insects, nectar, rotting fruit, and tree sap, Madden explains.

Do you have to buy yeast from the store?

The short answer is no.

Yeast that one buys from the store is a specific type of yeast, Saccharomyces cerevisiae, which has been grown in a lab and then freeze-dried.

"It is a species that is particularly well-suited for helping us make bread rapidly, but it is not the only yeast species that can do this," Madden says.

One can also catch wild yeast floating in the air and harness its bread-making power. The mixture of flour, water, and salt naturally attracts lactic acid bacteria and acetic acid bacteria microbes. In addition to adding flavor, they keep out unwanted microbes that could cause the starter to rot.

Since the wild yeast gives bread its flavor, the environment in which the starter is made also plays a role in the taste of the sourdough.

What happens after you make a sourdough starter?

Just like a person craving carbs, a sourdough starter is hungry. It needs to be fed in order to keep it around and enable the microbes to keep doing their work.

To feed a sourdough starter, mix in more flour and water to the base starter. With regular feeding, the sourdough starter can produce great bread a week after its creation. Once one has a starter, making a new one isn't required. Just a part of it to the dough to make bread.

About six to eight hours after its last feeding, mix the bread dough with the starter. Some of the starter will be used to make your bread.

How long does a sourdough starter last?

Like a fine wine, bakers and food scientists say that sourdough gets better with age.

"There is something special about a starter that has been around for years," Wilk explains. "It's much like a family heirloom."

Sim Cass is the dean of techniques of artisan bread baking at the Institute of Culinary Education and a baker at New York City's Balthazar Bakery.

Cass tells Inverse that the sourdough starter at Balthazar Bakery is 40 years old.

"That starter gets fed about four times per day, which is probably more ambitious than home bakers are willing to get," Cass says. "You can get good results by feeding once a day."

As one slathers butter on their baked goods, the rest of the starter stays in the fridge, waiting. With its tangy flavor and crispy crust, sourdough is as equally delicious as it is an opportunity to play with science at home. The bread's unique sour-ness comes from a chemical reaction — and it all starts with the sourdough's pièce de résistance, the sourdough starter.

It might sound tedious, but a long-term relationship is kind of the point, says Wilk, the baker who's found the age-old tactics of her profession in the spotlight again, as people seek solace in the science of sourdough.

More like this
Science
8.5.2022 6:00 PM
How is nature connected to well-being? It's complicated, scientists say
By Tara Yarlagadda
Mind and Body
7.30.2022 2:00 PM
Why does eating pineapple sting? A food scientist explains the chemistry
By Elana Spivack
Science
7.27.2022 11:00 AM
The Webb Telescope might confirm if one of Saturn’s moons has ingredients for life
By Kiona Smith
Related Tags
Share: