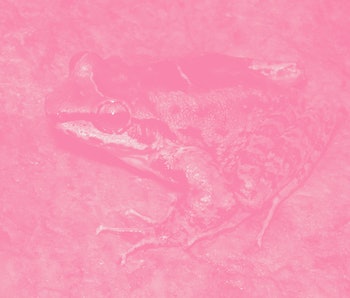 But these scenarios are actually pretty run-of-the-mill in nature. Harem polygyny — when one or two males mates with multiple females — has now been identified in every type of four-limbed animal. The latest finding is in a species of subtropical frog, the first identification of harem polygyny in amphibians.

In a study published Wednesday in the journal Science Advances, researchers detail how they studied a Brazilian Atlantic rainforest frog species, Thoropa taophora, and discovered that a single male mates exclusively with two females throughout a breeding season.

In the analysis, researchers took videos of frog behavior to study how male frogs interact with the two females to whom they stay faithful.

Lopsided triangle — As love triangles sometimes go, all parties aren't equal in these frog trios. There is a dominant female and a secondary counterpart, and male frogs behave differently toward the two.

Three mating rituals describe how frogs initiate courtship. In the first, a female approaches a male, turns her back toward him, and positions herself beneath him. This was only seen in dominant females. In the second, the male approaches a nearby female and puts the moves on her — this was also observed more in dominant than secondary females.

A third, more peculiar way that female frogs initiate mating is by beginning to cannibalize their own eggs and tadpoles. Previous research suggests that eating their own (or others') eggs is a way for females to gain the upper-hand when it comes to mating.

Males reacted to this in several different ways, including:

The researchers think that these behaviors have to do with natural selection, and male frogs are making sure that their eggs make it to their next life stages. Male frogs also patrol their eggs and use calls to ward off others. They're protectors, even when they have to diplomatically navigate a three-way romantic entanglement.

Abstract: Polygynous mating systems with group fidelity are a common animal organization, typically consisting of multiple females in a mated group with a single male for an extended period (sometimes referred to as harem polygyny). Single-male polygyny with reproductive fidelity occurs in invertebrates, bony fishes, and some tetrapods, such as lizards, mammals, and birds. In amphibians, reproductive fidelity in polygynous groups is not fully demonstrated. Combining data on larval development, molecular paternity assignment, and in situ behavioral observations, we reveal high fidelity during a prolonged breeding season in a Neotropical polygynous frog. Males dominate scarce breeding sites, guarding offspring, and mating exclusively with multiple females that exhibit dominance rank. This system likely evolved in response to intense competition for breeding sites and intrasexual competition for mates.