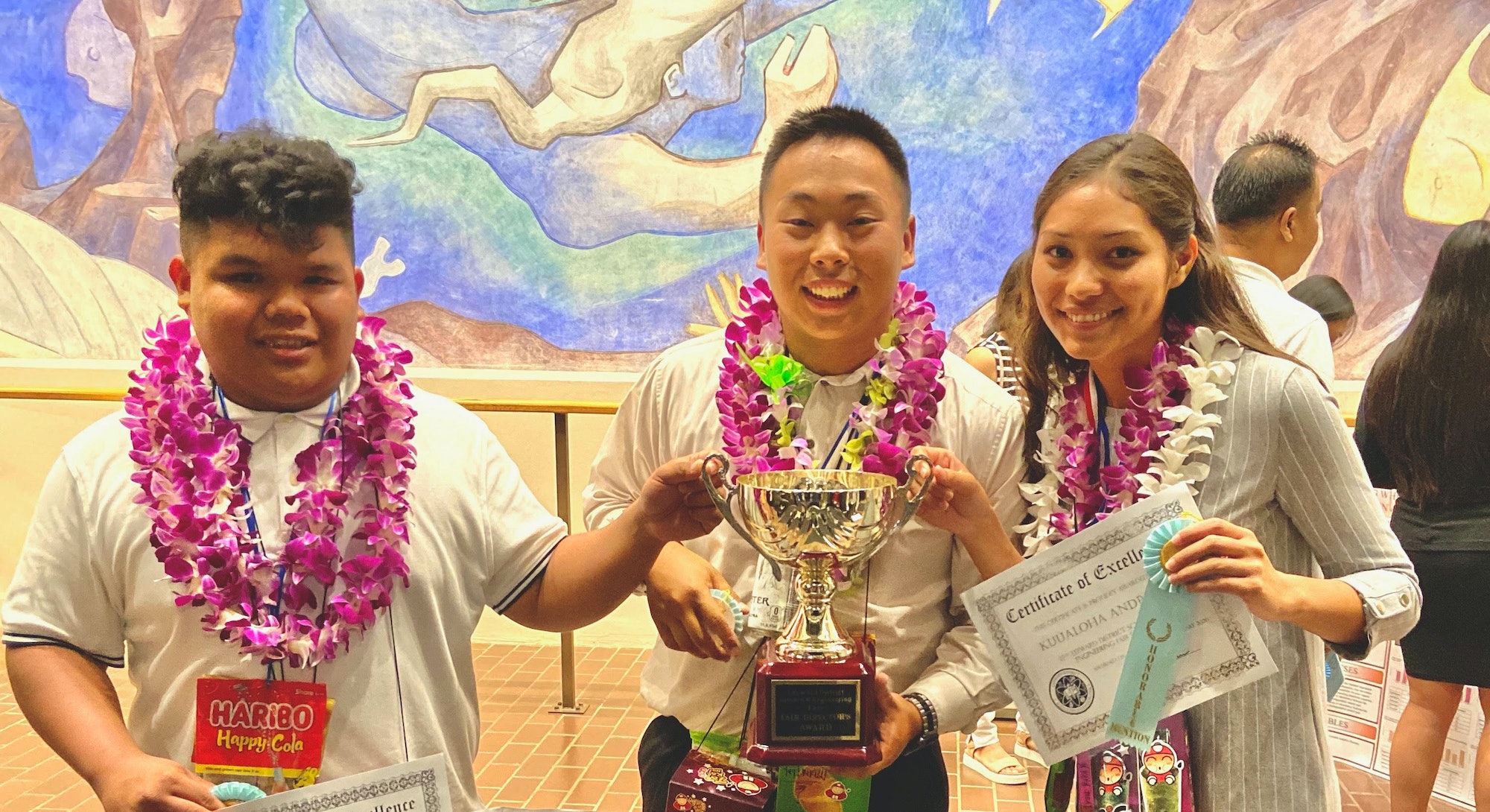 Hawaii’s living coral reef ecosystem is a unique world wonder, but the leakage of chemicals from our commercial sunscreens into ocean waters is deeply damaging it, bleaching it, and killing it off.

In light of this environmental problem, in 2018, Hawaii issued a wide-spanning state ban on the use of oxybenzone and octinoxate, renowned for allowing sunscreens to absorb and convert UVB and UVA II rays. The ban, first of its kind at the time, raised much of a controversy, since 70 percent of US sunscreens contain these chemicals, leaving consumers perplexed about how to protect their skin.

Enter three brilliant Waipahu High School students who have devised an eco-friendly, Hawaii-native alternative to commercial sunscreen which helps protect the coral reef instead of damage it: Ku'ualoha Andrade, a paddling aficionada with a heart for social justice, Dean Capato, an automotive wiz who dissembles and modifies cars during his free time, and Riki Nishizawa, a baseball boy with a knack for botany.

Tapping into their knowledge of natural resources, the O’Ahu born and bred trio used Naupaka Kahakai, a traditional plant local to the island, and mixed it with non-nano zinc oxide, some essential oils such as red raspberry seed oil, carrot seed oil, vitamin e oil, and then beeswax, coconut oil, and shea butter to create a concoction that provides excellent protection without harming the environment.

“The coral reef has had a huge impact on our islands,” Capato tells Inverse. “There's a lot of tourists that come here to see it, but they have sunscreens that have [harsh chemicals]. Since the corals are dying from the harsh chemicals, we fear we're not going to be able to see those types of corals anymore.”

With their project, Protecting the Reef Starts With the Right Protection, the team won the local, district, and state science fairs, and participated in the International Science and Engineering Fair (an annual event operated by Society for Science & the Public). An invaluable asset to their success? Teamwork.

“We can always motivate each other.”

“The science fair project really just put us all three together,” Nishizawa says. “Even though we butt heads all the time during this project, it was ok.”

Inverse spoke to Andrade, Cabato and Nishizawa about sticky sunscreen, competing in science fairs, and the inexorable value of helping each other out.

How did you assemble your team for the science fair?

KA: Dean and I went to the same intermediate together. Then, as freshmen, we all actually hung out together in the same area in the morning before school started, but we didn't really talk. With Ricky, we got close because we were in paddling season together. Then all us three had our classes together and we were starting to get closer.

RN: We were all in the same AP Environmental class senior year and everyone in the class got to choose their partners. We partnered up and it turned out that Andrade was into criminal justice, so she could do the laws, and that me and Dean were in the Natural Resources Academy, so we knew more about the plants and resources. It was a perfect combination.

So each of you has a special role. How do you collaborate with others on your team?

KA: We all helped a lot. We mainly came to my house, and that's where we did everything. At school we had a naupaka branch and leaves all over, so we would all grab some and rinse it off. Then we'd come to my house whenever we could and would do the whole process. We had a line, like a train. One of us would use the mortar and pestle and the other one would boil the leaves; we used a double boiling method to get the oils from the plant. Because we use all natural products instead of chemicals, the only chemical we used was non-nano zinc oxide, because that's safe for the corals. In the end, we would all come together and we'd actually type out everything for the report. We all had sections to do, and then we’d all go over it with each other to edit. It was very collaborative.

RN: It was super collaborative because we were really striving to get to the districts [science fair]. Once we got to pass the school fair, we were like, “Oh, let's go to the districts” and “Oh my God, let's go to States.” It was just competitive — just keep going and going up. It was a bunch of trial and error, and it took a long time for us to finally figure it out, but that's why we really needed to be communicating and sticking with each other.

KA: It was more about having fun with it and seeing if we can actually pull this off.

RN: Yeah, it wasn’t [competitive] at first. But then we started getting more attention. That’s when we were like, “We can actually do something pretty big with this.”

Would you say you have a team weakness?

DC: Just the amount of time that we have to do our thing or to get things complete. The time with us being together to work and to communicate with each other.

RN: Even in high school we had a bunch of extracurriculars, and that's where it got hard for us to find time. Sometimes we'd have to go right after practice, or right after school, to hurry up so we could get to practice.

KA: Me and Ricky were in paddling class together. So on Saturday we had to wake up at like 6 a.m. and then we finish at 12 p.m., and then we get home at like 1 or 2 p.m. and then we'd be doing our science fair.

DC: Plus, for our sunscreen, when we tested it to compare it to other different sunscreens, we had to do it at a specific time of day. We tried to do it when there was as much sun as possible so that we wouldn’t get any inconsistencies.

KA: States was not very interactive. You could put your project up on the website, and then the judges, if they had questions they would email you, and then you can answer them by a certain day. I think there was like a three-day judging period.

RN: Districts was much better because we had interaction with them and actually talk to the judges.

DC: We got to go more in depth with everything, and we actually had the sunscreen. We could try it and actually see the person.

KA: Yeah, and some people got three [judges]. We had like eight I think, or a lot. Because if they're interested in your project, they get a list and they'll go and judge you. So we even had the fair directors — one of them was interested in our product — so she judged us. And they only picked the top seven teams out of like 80 projects.

How have you changed your field? What do you aim to achieve?

KA: [The focus was] more on doing something native, especially because we were in AP Environmental, so we had to do something environmentally friendly. A lot of people were very impressed with it. So we started thinking about whether we were able to continue it and to get the resources for it. We were going to find a way to mass produce naupaka but not deplete the source. If you start commercializing everything but you're not careful, you can just wipe out the whole source of it.

RN: One of our things was to learn how fast we could grow it. Whether it was an aquaponic system or hydroponic systems, so that we can create some kind of efficient system that would stabilize. Our next big thing is trying to look into how we can grow it on a mass scale and take it to the next level.

What's the biggest advantage of working with a team?

KA: The fact that everyone thinks differently. [Everybody is able] to tell you their ideas and stuff.

DC: Another advantage is we can always motivate each other. You know, you can get things done or just give each other that motivation to keep working and doing the things that we need to be doing. And, like Ku’u said, getting the extra help.

RN: [During the science fair] with the interview part and the judging, being in a team, you're not alone. When you're alone, you really have to just think for yourself. But having all three of us there during the judging — we were able to just bounce off of each other's ideas. It made it a lot smoother through everything.