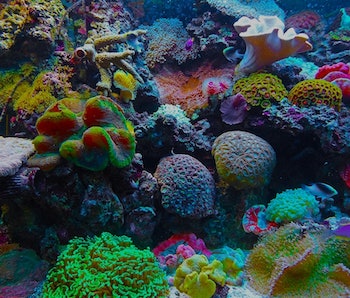 The corals of Hawaii are so stressed out that they’re encasing themselves in their own skeletons and self-destructing. Many coral researchers believe that two chemicals commonly found in sunscreen are at least partially responsible for this bizarre coral-stress behavior, and Hawaii Governor David Ige (D) is expected to sign a bill banning the sales of those chemicals in the state this week. The move is a controversially broad intervention — people are rightfully worried about getting skin cancer — but while scientists figure out how exactly the chemicals kill coral, it seems pertinent to err on the side of caution.

Ann Tarrant, Ph.D., a biologist at Woods Hole Oceanographic Institution who studies the effects of stress on coral physiology, explained in an email to Inverse that when coral experience stress, they tend to “ossify” — essentially, encase themselves in their own bone material and, if the stress continues, die. The chemicals found in sunscreen, oxybenzone and octinoxate (also known as octyl methoxycinnamate), have already been shown to contribute to coral bleaching — when coral reject the helpful little organisms that help them photosynthesize and also give them their bright colors — but there are concerns that they might cause coral ossification as well.

The mystery is that no one is exactly sure how these chemicals cause these effects.

The authors of what is widely considered the definitive paper on coral stress, published in 2015 in Archives of Environmental Contamination and Toxicology, state that coral ossification is “one of the strangest cases of developmental endocrine disruption to wildlife.”

The team goes on to cite a bunch of papers that explain how the levels of certain hormones, like estrogen, can be disrupted by oxybenzone in mammals and cause skeletal problems. In vertebrates, high levels of estrogen can result in hyper-ossification (the overproduction of bone tissue), and low levels of estrogen lead to bone loss, as documented in post-menopausal women who develop osteoporosis. When it comes to coral and sunscreen, the idea is that oxybenzone somehow disrupts the coral’s own “endocrine systems” in the same way that certain chemicals affect estrogen in vertebrates, causing over-ossification.

This is just a hypothesis, cautions Tarrant, who says we still don’t know whether this mechanism is what actually causes the coral to self-destruct in such a dramatic way. It is true, however, that coral have internal signaling systems that can be potentially disrupted by chemicals.

“The very short answer is that we don’t know enough about how ‘endocrine-like’ systems work in corals to understand how sunscreens would affect them,” Tarrant says. “The response of corals may be related to disrupting a specific signaling system, or it may be a more general stress response.”

Tarrant explains that corals do produce certain compounds that act like signaling molecules, much like estrogen in vertebrates. She suggests that the sunscreen might mimic natural signaling molecules in coral that could cause it to produce that self-destructive respose. The 2015 study additionally demonstrated that oxybenzone caused deformations in the skeletons of young coral, adding credence to the idea that oxybenzone does mimic some type of natural molecule.

But even that leads to another mystery: “We just don’t know specifically which molecules and how they act on a molecular level,” Tarrant adds.

Coral physiology researchers are still debating how coral signaling systems might be affected by these chemicals. What we do know is that oxybenzone is harmful to corals and that banning it will likely have a positive effect on maintaining coral reefs around the world. And because coral and its many inner workings still remain a mystery, we’re better off trying to save as much of it as we can until we figure things out. If the bill passes, it won’t go into effect until 2021, which means you have plenty of time to find a sunscreen alternative.