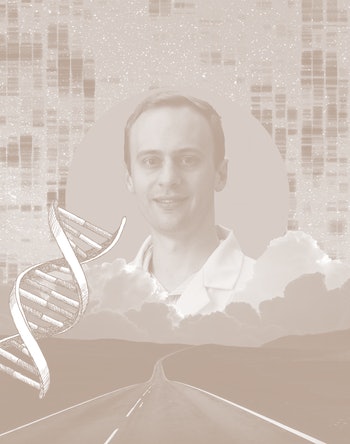 Kevin Esvelt worries more than the average scientist. It’s a consequence of having invented a technology powerful enough to alter an entire species.

In 2013, Esvelt came up with the concept of CRISPR-based gene drive. The technology uses CRISPR, a gene editing tool, to hack the laws of inheritance: It allows scientists to genetically modify a few individuals that then spread a modified gene throughout an entire population, and eventually, every population around the world.

The implications are huge. Gene drives could be used to eradicate malaria, fight Lyme disease, help conserve endangered species and alter pests so that they no longer attack crops.

“After all, why spray chemicals to kill things that are causing a problem? Why not just tweak them so they don't do whatever behavior causes the problem and otherwise go about their normal ecological role?” Esvelt, 37, tells Inverse.

He sees the darker side just as clearly: Theoretically, a single scientist could release a gene drive into the wild, accidentally or intentionally, possibly affecting ecosystems in unanticipated ways or breaking public trust in science. It would affect everyone, yet they wouldn’t need anyone’s consent. “They could just do it and there would be very little that anyone could do to stop them.”

When Esvelt and his colleagues made the first gene drive in yeast in 2015, they also created a way of restoring an edited gene using a second gene drive, although the species would still end up being altered by humans. Nonetheless, the thought that something bad might come before something good has kept Esvelt up at night. It’s also pushed his career from straight science into ethics and safety. He is now one of the strongest voices pushing for change in how scientists conduct research on powerful technologies. Through gene drives, he hopes to engineer ecosystems but also reshape the culture of science.

Esvelt grew up on the West Coast, in Portland and Seattle. He’s always been fascinated by living things. In the sixth grade, his parents took him to the Galapagos Islands, where he was awed by the diversity of creatures.

“My favorites are probably the marine iguanas,” he says, the excitement in his voice still tangible. “They're iguanas, but they swim. How wild is that?” The trip also led him to read Charles Darwin’s works. He decided he wanted to learn to create something as beautiful as nature — but without the suffering.

To Esvelt, nature is cruel. Growing up, he remembers his cats bringing him gifts “in the form of crippled small creatures who were clearly suffering horribly.” He sees natural selection as immoral. Evolution simply designs organisms to replicate, he says. If it takes pain and agony to improve the odds, that’s what we get.

Nonetheless, he loved the natural world as a teenager. In high school, he was a radical environmentalist with a penchant for big ideas. Concerned with overpopulation, in college, he focused his undergraduate thesis on a sperm surface protein in order to find a reversible sterilization treatment for men. The default setting for human reproduction should be off, he thought.

After graduating, Esvelt went on to pursue a Ph.D. at Harvard University and later took on a position as a fellow at Harvard’s Wyss Institute, where he worked with a team researching CRISPR, often described as “molecular scissors” that can precisely cut DNA in any preprogrammed location.

In the spring of 2013, he was walking through a park in Boston when the idea dawned on him: What if you could give an organism the tools to edit genes by itself?

Creatures that reproduce sexually usually have two copies of genes, one from each parent. That means any gene, even a modified one, has about a 50 percent chance of being inherited. Natural selection favors traits that improve the odds of survival, however, which is often not the case with engineered traits. In the wild, modifications usually disappear.

Gene drives change those rules. In a CRISPR-based gene drive, scientists insert an edited gene into an organism’s DNA along with the sequence that codes for CRISPR. Inside a cell, CRISPR cuts out the original gene and the cell replaces it with the modified sequence. With two copies of the gene, the organism will inevitably pass it on to all its offspring. There, the process repeats and the gene gets passed on and on and on.

Esvelt imagined all the problems gene drives could solve. In malaria alone, it could save nearly half a million lives per year. “After that first day of euphoria, I started worrying,” he says. CRISPR is surprisingly easy to use. Once knowledge got out, any scientist could build a gene drive and alter wild species. No one had ever imagined such a thing, even in science fiction, he says.

“We need to change the way that we ascend the tree of knowledge.”

His career soon veered down a path he had never expected. Educating the public about gene drive technology became a major part of his work. He’s now even featured in a recent Netflix series, Unnatural Selection, that follows scientists and biohackers using CRISPR. Seeing himself on the streaming platform is “deeply strange,” he says.

The dilemma that fell into his lap also opened his eyes to major problems in science. Studying science forces people to become extreme specialists, he says. That mindset makes it easy for scientists to overlook the broader complexities of the real world and understand the consequences of their work. The system also is also built on secrecy. Scientists normally only publish their findings once their experiments are complete, which doesn’t give others the opportunity to assess what might go wrong.

“For both moral and practical reasons, gene drive is most likely to succeed if all the research is done openly,” Esvelt told the New Yorker in 2016. He wants stakeholders to review research before experiments start and affected communities to be involved in decision-making. (In 2016, his team invented a form of gene drive that has more localized effects.)

He and his colleagues are demonstrating what openness in research looks like. They’re pursuing a project in Martha’s Vineyard and Nantucket that aims to make mice immune to Lyme disease, interrupting the pathogen’s transmission into ticks. In the past few years, Esvelt has met with community members at least 20 times to get feedback. They decided they didn’t want a gene drive, so Esvelt and his team won’t be using one. “If it’s your environment, it’s your call,” he told Vice in 2019.

With gene drives, social risks—say, a loss of trust in science—outweigh biological ones, Esvelt says. Genes drives are slow to propagate, genetic alterations can be spotted if they occur and, perhaps most importantly, changes can be reversed. But he worries about what comes next. What if the next invention isn’t so benign?

“Not all knowledge is actually good for you,” he says. “We need to change the way that we ascend the tree of knowledge to somehow ensure that we don't encounter anything poisonous.”

Kevin Esvelt is a member of the Inverse Future 50, a group of 50 people who will be forces of good in the 2020s.