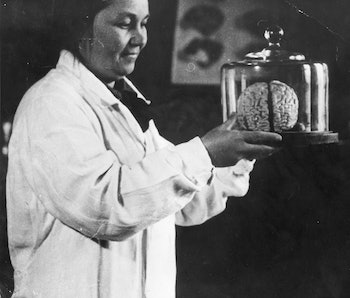 Ever feel like your brain just doesn’t want to do its job? Sometimes, it can seem like your ability to focus starts to fizzle or just breaks down entirely. If you know the feeling, you don’t need to dwell on it too much — Inverse has you covered.

Discover three helpful hacks for focus in today’s newsletter, along with more science stories, and our special weekend bonus feature. Give yourself permission to indulge in a little unfocused daydreaming. It’s Friday, after all.

This is an adapted version of the Inverse Daily newsletter for Friday, February 25, 2022. Subscribe for free and earn rewards for reading every day in your inbox. ✉️

Three hacks to retrain your brain

“For about half of our awake time, the mind wanders,” writes health reporter Ali Pattillo.

“Rather than honing in on the present, it ruminates on the past or tries to predict the future — often, it spends its time on these erroneous thought patterns while we’re consciously trying to concentrate on what is actually going on. Helpful.”

But there’s hope for your brain yet. Amishi Jha, director of contemplative neuroscience and professor of psychology at the University of Miami, tells Inverse there’s a special knife to cut through the world’s noise.

“With simple and consistent mindfulness training, it’s possible to bring awareness to how you’re paying attention,” reports Pattillo. “In doing so, you can temporarily lift the fog of distraction and zero in on the joys and challenges around you.”

It’s easier said than done, but Jha encourages people to think of the consequences of zoning out. “When our reputation, sense of justice, sense of purpose, or ethical code get violated, it feels very consequential,” Jha tells Inverse. If you’re convinced, Jha offers three quick tips to practice mindfulness (all of which you can read about in more detail by clicking the article below): mentally stopping while physically stopped, “monotasking,” and remembering thoughts aren’t facts.

Gravity is Earth’s oversized cardigan. I take comfort in knowing where everything ends up. But unlike me, scientists prefer their cardigans a little stretched — and perhaps a little see-through. Physicists and civil engineers have been developing a “way to use gravity in the form of a quantum gravimeter designed to read gravitational fields to ‘look’ deep underground without ever picking up a shovel,” writes Sarah Wells.

This practice involves “using interferometry [...] to compare the paths that atoms take when a laser pulse sends them on two different paths,” writes Wells.

“Comparing the journeys of these atoms can then help scientists understand how local differences in gravitational fields impacted their path,” allowing them to discover what’s under Earth’s surface.

But there’s a problem with this trick: “The sensitivity of these sensors has traditionally been problematic because the vibration noise of a nearby car can be indistinguishable from gravitational changes,” writes Wells.

According to researchers, this phenomenon is due to Einstein’s equivalence principle, “which says it’s not possible to differentiate between acceleration and gravity.” Now, scientists are working on a way out by performing “these measurements on thousands of atoms that are held in two matching atomic ‘clouds’ within their sensor,” writes Wells.

More Albert Einstein: Physicists are on the brink of solving a problem Einstein couldn’t

See a stunning new image of the Rosette Nebula

You never know what you’ll find in your backyard. In his backyard in Santa Clarita, software engineer Kevin Gill found the perfect view of the Rosette Nebula, an “emission nebula” that glows because of radiation from its young stars.

The bud-shaped nebula (or skull-shaped, depending on who you ask) “is located in the constellation Monoceros the Unicorn in the Milky Way, about 5,200 light-years from Earth,” reports Passant Rabie. “The Rosette Nebula spans a distance of about 100 light-years, but it is not very bright. Therefore, capturing it on camera presented a challenge for Gill.”

Despite being taken in his backyard, the photo wasn’t one of convenience. Because the Rosette is so far from Earth, “Gill pointed his camera upwards for about four to five hours until midnight,” reports Rabie. Then, he “kept every exposure frame taken over the five-hour time window, with 30 seconds per exposure.”

The painstaking process resulted in a gorgeous image of the Rosette, looking, to me, like a smudgy red blood cell in the sky. Never say you can’t see the stars from Los Angeles.

The world is in your backyard: How to turn your garden into a national park

Oh, what am I doing this weekend? Thanks for asking, I’m going to be playing hours and hours of Elden Ring, a hot new game released today.

If you’re not familiar with one of the year’s most anticipated video game releases, Inverse has all the juicy details. In his review, video-game writer Joseph Yaden describes FromSoftware’s latest role-playing game as “meticulously designed, with careful intent always at the forefront of the entire experience.”

“The second boss battle caused me to nearly tear up due to how badass it was,” writes Yaden. “Just when you think you’ve seen every cool creature design imaginable, FromSoftware throws another curveball.” Join me and slay some monsters this weekend.

It hurts, coach: The 22 most brutal ‘Dark Souls’ bosses, ranked

More like this
Science
Jan. 26, 2023
JWST captures Chariklo’s rings and more: Understand the world through 8 images
By Robin Bea
Science
Feb. 1, 2023
65 Years Ago, America Launched Its Most Pivotal Space Mission Ever
By Jon Kelvey
Science
Jan. 26, 2023
An asteroid will come within 2,200 miles of Earth tonight — here’s why you shouldn’t worry
By Jennifer Walter
LEARN SOMETHING NEW EVERY DAY.
Related Tags
Share: