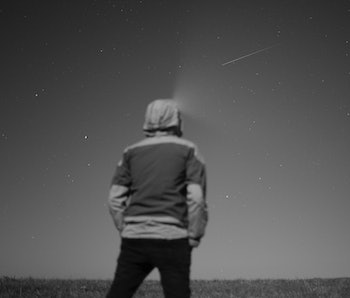 After a three-month drought, the night skies will shine with fiery streaks once more with the kick-off of the Lyrid meteor shower on Monday, April 19, 2021.

The annual meteor shower will pick up on the night of April 19, and reach its peak around predawn on April 22, signaling the beginning of the sky watching season. As the Lyrids are the biggest meteor shower of the spring, it’s a great start to cosmic storm season.

Meteor showers are created from the bits of debris that fall from comets and asteroids. As these rocky bodies of frozen gas, dust, and other material travel toward the Sun, the star's powerful gravitational pull can weaken them, breaking them apart as they draw near.

The dust that trails from comets forms into a debris field in their orbit, and Earth passes through these trails each year during its orbit around the Sun.

These interstellar travelers are made up of material that likely dates back to the formation of the Solar System, making them important fonts of information about how our cosmic neighborhood came to be. Crucially, some of that dust interacts with Earth's atmosphere and disintegrates, forming the fiery streaks that we observe in the sky as meteor showers.

How old are the Lyrid meteor showers?

The Lyrids are one of the oldest known meteor showers, having been observed for 2,700 years. It originates from comet C/1861 G1 Thatcher, which was discovered on April 5, 1861 by A. E. Thatcher.

The comet orbits the Sun every 415 years. Its last close pass to Earth was close to its discovery. It will next visit us in 2276.

Where to see the Lyrid Meteor Shower

The Lyrids appear to radiate out from the star Vega, the brightest object within the constellation Lyra (the harp). Because it is so bright, Vega is easy to spot in the night skies.

However, it is best to view the meteor shower away from their radiant point so that they don’t get overshadowed by the light of the star.

You also want to block out any light coming from screens of electronic devices or flashlights and allow your eyes to get accustomed to the darkness for around 30 minutes before you look up.

The shower will begin to appear in the night skies on Monday night, and peak around the predawn hours of Thursday morning, according to EarthSky. The constellation Lyra will rise in the northeast between 9-10 p.m.

You can probably still see it on Friday morning before it fades away.

The Lyrids don’t produce a lot of meteors, probably peaking at 10-15 meteors per hour. However, they are rather bright so they should be easy to spot.

When is the next meteor shower for 2021?

The Perseids will be the biggest meteor shower of the year. You won’t want to miss it. But in the meantime, let the Lyrids whet your appetite.

Check out our 2021 astronomy calendar