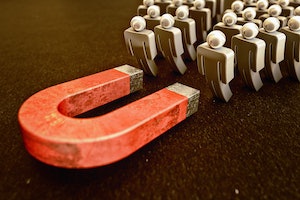 When you think of magnets, you probably picture a dull third-grade science experiment, or the tacky palm tree souvenir you picked up on your last beach vacation, which now serves to hold up the overdue electricity bill on the fridge.

Yet magnetism is one of the most defining properties of our planet, enabling us to explain and understand phenomena, from anomalies in the human body, to why Santa Claus ostensibly lives at the North Pole.

Giant, ancient magnets might just help us figure out climate change, too.

New research published in the journal Proceedings of the National Academy of Sciences reveals how giant magnetic fossils from 34-56 million years ago could help scientists understand periods of significant environmental change — both past and present.

Some background — Scientists studied both conventional and giant needle-shaped "magnetofossils" which were found in the continental shelf in Wilson Lake, New Jersey.

As the study states:

As a result, these fossils contain the remnants of microscopic, magnetotactic bacteria and other microorganisms with iron components. In these bacteria's case, magnetotactic means they orient themselves along magnetic field lines.

As the study explains, the bacteria in magnetofossils formed magnetic chains, acting like a small-scale compass. This magnetic ability guided the microorganisms to favorable nutrients in nearby oceans using Earth's magnetic field like a road map to food.

Ancient, giant magnetofossils, formed some 34-56 million years ago, took these magnetic properties to another level, forming unique shapes, including "giant bullets, spindles, and needles," which were approximately 20 times the size of conventional magnetic fossils, according to the research.

How they did it — Unlike previous studies, which crushed samples from magnetofossils into powder, these researchers examined the fossils without damaging them.

According to the study, FORC can "measure the response of all magnetic particles, including giant magnetofossils, within a bulk sediment sample."

They also used transmission electron microscopy to generate an image of the specimens using a beam of electrons. Finally, they used simulations to predict the magnetic behavior of giant needles in the fossils.

Preserving samples is important for future research, Courtney Wagner, lead author on the study and a doctoral student from the University of Utah, said in a press statement.

"The extraction process can be time-consuming and unsuccessful, electron microscopy can be costly, and the destruction of samples means that they are no longer useful for most other experiments," Wagner says.

What's new — The giant, needle-shaped magnetofossils — not unlike the needle of a compass — produce "distinct magnetic signatures" from the ones typically found in conventional magnetic fossils, the researchers found.

These distinct features could ultimately reveal other giant magnetofossils, according to the research.

The structure of conventional magnetofossils are "optimized for magnetic navigation," because they generate the "maximum magnetic moment with the minimum amount of iron," the study says.

Curiously, the structure of giant magnetofossils is more variable than the researchers had expected. One theory they present is these giant magnetofossils may have formed at a time when there was abundant iron, making efficient magnetic movements less critical to the organisms' survival.

Why it matters — The giant needle magnetofossils are uniquely associated with periods of ancient environmental upheaval.

In turn, researchers could use these fossils to better understand how ecological disturbances affect ancient marine life and the ocean ecosystem.

"It's so fun to be a part of a discovery like this, something that can be used by other researchers studying magnetofossils and intervals of planetary change," Wagner says.

"This work can be used by many other scientists, within and outside our specialized community. This is very exciting and fulfilling," she adds.

There are no living creatures that form giant magnetofossils, making the study of these specimens incredibly important.

Ultimately, they could act as a time capsule, revealing ancient changes to the geological record — and hidden insights into modern-day climate change and the world's oceans.

According to the study:

By studying the occurrence of giant magnetofossils, we can better understand how sensitive marine ecosystems responded to past climate change events.

If the microorganisms in these fossils could use magnetic fields to respond to past climate change and adapt, using the Earth's magnetic field to find nutrients for survival, perhaps those lessons could help us respond and adapt to the climate crisis in the present.

What's next — "The organisms that produced these giant magnetofossils are utterly mysterious, but this leaves exciting research avenues open for the future," Ioan Lascu, a co-author on the study and researcher at the Smithsonian National Museum of Natural History, said in the press statement.

But the scientists need to do more research to fully understand the makeup of the magnetic bacteria in these giant fossils.

"Collection and storage of these samples require specialized personnel, equipment and planning, so we want to preserve as much material for additional studies as we can," Wagner says.

Abstract: Near-shore marine sediments deposited during the Paleocene–Eocene Thermal Maximum at Wilson Lake, NJ, contain abundant conventional and giant magnetofossils. We find that giant, needle-shaped magnetofossils from Wilson Lake produce distinct magnetic signatures in low-noise, high-resolution first-order reversal curve (FORC) measurements. These magnetic measurements on bulk sediment samples identify the presence of giant, needle-shaped magnetofossils. Our results are supported by micromagnetic simulations of giant needle morphologies measured from transmission electron micrographs of magnetic extracts from Wilson Lake sediments. These simulations underscore the single-domain characteristics and the large magnetic coercivity associated with the extreme crystal elongation of giant needles. Giant magnetofossils have so far only been identified in sediments deposited during global hyperthermal events and therefore may serve as magnetic biomarkers of environmental disturbances. Our results show that FORC measurements are a non-destructive method for identifying giant magnetofossil assemblages in bulk sediments, which will help test their ecology and significance with respect to environmental change.