What if we find aliens, but it's too late for them?

“If we can detect these kinds of chemicals in the atmospheres of other planets, it means that they've done something far beyond what we've done with Earth” 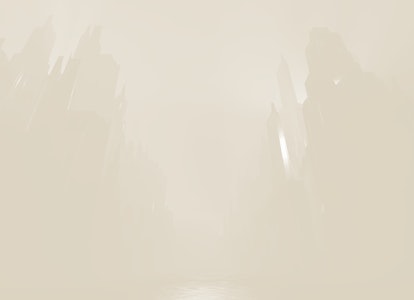 When they were creating a model for an alien civilization on another planet, Jacob Haqq-Misra admits that he and the rest of the team of researchers had Earth on their minds.

“I’ll say it upfront, a lot of the assumptions in this model are fairly Earth-centric,” Haqq-Misra tells Inverse.

It makes sense. So far, we only know of one technologically advanced species: ourselves. This means we have to look to ourselves and the evolution of our own civilization. Haqq-Misra and colleagues worked within a grim but all-too-real framework: The more advanced we become, the more harm we inflict on our planet.

In a recent paper that is currently still under review, Haqq-Misra, a senior researcher at the Blue Marble Institute of Science and co-author of the paper, and his team designed a climate model for an alien civilization to find out if planets with intelligent life also go through rapid changes caused by civilizations like humans on Earth — an era we refer to here as the “anthropocene,” a geologic era where human activity is the dominant shaper of our world.

Through their model, they found that as a society gets more advanced, world-changing problems compound. And as we seek to find alien life through technosignatures, or phenomena that could only come from advanced technology, it also could mean that whatever life we’re finding is on the verge of dying out.

“We basically wanted to know ‘how does temperature on a planet change as you change the amount of atmospheric carbon dioxide?’,” Haqq-Misra says. “And then we've added some population dynamics where there's a civilization that uses some amount of energy, which increases the carbon dioxide output into the atmosphere.”

The model follows this rough timeline.

This results in the eventual dying out of the entire civilization. And all that’s left to find from the once inhabited planet are the signatures produced by its technological advancement that also sealed its doom.

As scientists search for life beyond Earth, they look for telltale signs of life coming from alien worlds.

Astrobiologists look for life-friendly environments or even biosignatures — a cosmic fingerprint, like certain chemicals that may have been produced by some form of past or present life, be it microbes or space whales.

Meanwhile, other researchers try to find evidence for intelligent alien civilizations. That means that they’re not just looking for any life, microbial or otherwise, but lifeforms that developed far beyond that, building intelligent civilizations similar to, or more advanced than, our own. The easiest way to do this is by looking for traces of their technology.

Jason Wright, director of the Penn State Extraterrestrial Intelligence Center, says that finding these breadcrumb trails doesn’t necessarily mean that an alien civilization developed the same way it did on Earth.

Technosignatures are signs of a technologically advanced activity, and they could come in different forms:

The last two technosignatures might mean we have found life, but we may not get a chance to meet it. This paper in particular looked at pollutants causing a runaway climate event.

“If we can detect these kinds of chemicals in the atmospheres of other planets, it means that they've done something far beyond what we've done with Earth,” Wright tells Inverse. “The chemicals we put in Earth's atmosphere are not really abundant enough that they'd be obvious for someone looking from another star.”

How do we look for alien pollutants?

In the past few years, space telescopes have gotten advanced enough to probe the atmospheres of other planets. So far, most of them are gas giants — not exactly places conducive to life.

With the upcoming launch of the James Webb Space Telescope slated for October 31, 2021, astronomers are anticipating a much more detailed analysis of the composition of the atmosphere of Earth-like, rocky planets.

But what gasses should we look for if we’re looking for intelligent aliens?

“Well, we don’t really know,” Wright says. “We just got started thinking about this recently.”

But other possibilities could be more ambiguous. Ravi Kopparapu, a researcher at NASA’s Goddard Spaceflight Center, gives the example of nitrogen dioxide. Although nitrogen dioxide is primarily produced through fossil fuel or vehicle emissions, it might not be an open-and-shut case.

“You can have other sources that could mimic a technological pollution feature,” Kopparapu tells Inverse, pointing out that there may be another planet where nitrogen dioxide is produced by lightning or volcanoes.

Another issue is that technosignatures are difficult to detect, unless they’re quite abundant. But their abundance is also bad news for the planet from which they are coming from.

Based on the model created by the recent study, technosignatures are not only an indication that a civilization has evolved, but also a harbinger of their end times.

“It's really showing that combustion is short-lived,” Haqq-Misra says. “Not only because combustion is potentially using a limited fuel source, whether it's fossil fuels or coal, but also because using combustion can lead to these rapid climate changes that will be difficult for a growing population.”

“It’s difficult to make that sustainable,” he adds.

Perhaps, though, some civilizations have figured out ways to be sustainable, striking that balance between being technologically advanced while also being environmentally friendly. “I would probably think that they would be trying to reduce their emissions just like we are doing now,” Kopparapu says.

If that assumption is correct, then there may be other ways to detect a civilization other than fossil emissions. Like their own attempts to save themselves. “If you had a planet covered in solar panels, that might be detectable and that might be long lived,” Haqq-Misra says.

As scientists consider these different possibilities, they are confident that we are inching closer in our search for alien civilizations inhabiting worlds other than our own.

“This is no longer science fiction, it's going to become a science reality within a few decades,” Kopparapu.

More like this
Science
6.30.2022 10:00 AM
Behold! Curiosity discovers Martian rocks contain an essential ingredient of life
By Allison Parshall
Science
6.22.2022 10:15 AM
Ice could bring an unexpected key ingredient for life in alien oceans
By Kiona Smith
Science
22 hours ago
25 years ago, NASA landed its first rover on Mars — and catalyzed the search for life
By Doris Elín Urrutia
Related Tags
Share: