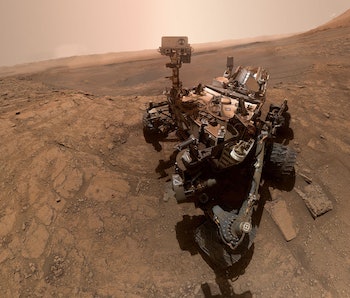 For more than nine years, a car-sized robot has been roaming the Martian landscape in search of ancient life.

NASA’s Curiosity rover landed on Gale Crater on August 6, 2012, and has been exploring the presumably dried-lake ever since. But a fresh look at Curiosity’s old data revealed that the ancient basin may not have been as wet as scientists once believed, possibly altering the history of water on Mars and the probability of the Red Planet hosting life during its past.

The study was published in the journal Science Advances on Friday.

Here’s the background — For a window of time, Mars could have had all the right ingredients for life, and the key to unlocking its possibly habitable past is through the history of water on its surface.

Although Mars is cold and inhospitable today, it may have once had flowing rivers and pooling lakes. Mars’ water carved out its surface and filled up its craters, turning them into lakes. One example is the Gale Crater, a large impact basin with a massive mountain dubbed Mount Sharp at its center.

Previous evidence has suggested that Gale had a lake, or a series of lakes, and perhaps even a river flowing into the lake.

Tanya Harrison, a planetary scientist and director of science strategy for Planet Labs, who was not involved in the study, says that the reason Gale Crater was designated as the Curiosity rover’s destination is that Mount Sharp appeared to straddle that boundary between warm, hot Mars and cold, dry Mars.

“The crater was probably filled with water — that water evaporated and left the bottom half of Mount Sharp behind, which eventually eroded to the point that it's at today,” Harrison tells Inverse. “At some point later, these wind-blown deposits were laid on top of that. Because the top half of Mount Sharp is not carved by any channels or anything that we can see, that suggests that it never interacted with water.”

WHAT’S NEW — By reexamining evidence collected by the Curiosity rover, a group of scientists at the University of Hong Kong hypothesize that most of the sedimentary deposits in Gale Crater were in fact not lake sediments. Instead, they may have been windblown sediments that formed in open air.

The Curiosity rover had initially found clay, mineral-rich sediment similar to those found in lakes on Earth. Sediment was carried to Gale Crater by water and wind and filled in the crater floor. After the sediment hardened, wind carved the layered rock into Mount Sharp.

But the new study suggests that the metric used to analyze the sediment on Mars is not comparable to the one used on Earth. Instead, the majority of sediment cannot just be explained by the presence of a lake during Mars’ ancient past.

The authors behind the new study suggest that a small fraction of the Gale Crater deposits did form from interacting with liquid water billions of years ago, while the majority of the sediments came to be by traveling with Martian winds and landing at the crater.

The sedimentary layers formed in Gale Crater were likely airborne dust or volcanic ash, according to the study.

“It sounds like what they're saying is it might have actually just been this very shallow lake environment so you might not have had this lake that was kilometers deep full of water,” Harrison says. “So you had these recurring wet and dry conditions.”

Without actually being on Mars, Harrison says that it’s hard to come up with conclusive scenarios of what happened to its water. So while the evidence in the paper supports the authors’ argument, it’s difficult to say for sure whether or not they are right.

“This is one of the big limitations of trying to do remote sensing and doing science on other planets,” Harrison says. “We get ambiguous data a lot of the time that could point to multiple ideas.”

The new findings give credence to the idea that maybe Mars was never wet all over, but that the planet went through transient damp periods. In turn, with water being one of the main ingredients for life on a planet, this has major implications for the probability of ancient life on Mars.

“That obviously is way less conducive to life popping out because if there's not a lot of water, it doesn't stick around for very long, then the water wasn't there long enough for life to actually evolve,” Harrison says.

Was there life on Mars? On June 19, 1976, the Viking 1 lander was the first spacecraft to successfully land on Mars.

Viking provided the first evidence that Mars had ancient river beds and vast flooding, as well as all of the elements that are essential to life on Earth, such as carbon, nitrogen, hydrogen, oxygen, and phosphorus.

Since then, scientists have been debating the existence of ancient microbial life on Mars during its early past.

Since it landed on Mars in 2012, the Curiosity rover has collected evidence of Gale Crater’s potentially wet past. In 2019, the rover stumbled upon rocks enriched in mineral salts that suggested the crater was once dotted by shallow briny ponds that went through episodes of overflow and drying.

The Curiosity rover has been analyzing the chemistry and minerals of the rocks in Gale Crater, and a paper published in May 2020 suggested that there was abundant liquid water in the past, and various organic molecules preserved in the Martian rocks.

Paul Byrne, associate professor of planetary science at North Carolina State University, who is not involved in the study, is skeptical of the recent findings since there have been lots of observational data supporting the presence of lakes on Mars.

“There seems to be a great amount of evidence for water having been ponded in Gale Crater for substantially long time scales,” Byrne tells Inverse. “So a hypothesis that wind-blown sediments constitute the sediments in the crater needs to account for the mineralogies and morphologies of the rock units there.”

WHY IT MATTERS — Reconstructing the history of water on Mars not only helps scientists understand whether or not the Red Planet could have hosted life during its early history, but it also provides them with precious insight into the development of life on a planet.

“Since we don't know how long it takes for life to evolve,” Harrison says. “Did those cycles last long enough for life to evolve and take hold? Did life evolve early and then it died because it couldn't survive through these cycles?”

WHAT’S NEXT — On February 18, NASA’s Perseverance rover landed on Mars to begin its mission of searching for clues of ancient life, improving on the instruments on-board the Curiosity rover.

Perseverance will explore Jezero Crater, a dried-up, ancient lake that may have once housed microbial life billions of years ago.

The two sites are similar in that they may be dried up lakes with sediments that may have formed after water interacted with the Martian surface. But Perseverance will not only explore Jezero, it will also collect samples and stow them away for a future return mission to Earth where they will be analyzed in a lab.

“The nice thing is that for the first time we'll have samples from Mars that are in context,” Harrison says. “We can put together that bigger picture and it'll be a lot easier to paint this bigger picture of what happened.”

Abstract: After over 8 years of successful surface operations on Mars, the Curiosity rover has revealed much about the environment in Gale crater. Despite early observations of a lacustrine environment, few of the subsequent deposits exhibit demonstrable lacustrine character. We suggest instead that most of the stratigraphic section explored to date can be best explained as eolian and/or volcaniclastic sediments subaerially chemically weathered by acidic precipitation in a reduced atmosphere. Most of the deposits in Gale crater seemingly did not form in an ancient lake, but the results nonetheless shed considerable light on ancient climate, environmental change, and the astrobiology of Mars. Discoveries by Curiosity provide a critical piece to Mars’ global alteration puzzle.