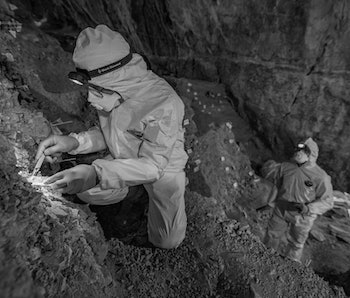 The story you were taught of the original peopling of the Americas likely went like this: About 13,000 years ago, big-game hunters entered the continent through an ice-free corridor from Asia. They moved southward, spread across North America, and had their own distinct material culture.

The story of big-game hunters describes the ‘Clovis-first’ model, and today, most experts agree that it is wrong. Successive finds in North and South America indicate that humans migrated much earlier. One of the handful of questions that remains is how much earlier?

Ciprian Ardelean is an archeologist affiliated with the University of Zacatecas. He tells Inverse that most academics accept that people entered North America at least 16,000 to 18,000 years ago.

“The 'older-than-18,000' discoveries have to struggle for years to be accepted by the academic establishment, exactly how it used to be during the Clovis-first reign,” Ardelean says.

Ardelean's research pushes the date of humans in North America nearly twice as far back in time.

For the past ten years, Ardelean has directed a project aimed at finding early human sites in the Zacatecas desert in North-Central Mexico. Now, based on evidence discovered in a location known as the Chiquihuite Cave, Ardelean and his colleagues believe that the initial entry date into the Americas could have been as far back as 33,000 years ago.

Together, the research suggests that people trickled into North America at a much earlier date — possibly before the Last Glacial Maximum, but at least during and immediately after it.

Changing the timeline — The second paper was led by Lorena Becerra-Valdivia, an archeologist scientist affiliated with the Universities of Oxford and New South Wales. She was also the second author of the Chiquihuite Cave article.

Becerra-Valdivia, along with University of Oxford professor Tom Higham, used a statistical tool called Bayesian age modeling to define the chronology at 42 archeological sites. The aim was to estimate the timing of the earliest humans in North America.

“Bayesian age modeling involves taking a step back and looking at the entire picture to better understand what happens next,” Becerra-Valdivia tells Inverse. “This allowed us, for example, to identify that the three major stone tool traditions in this wider region began, roughly, at the same time, and that it was during this period that human populations expanded.”

Their estimate puts the first humans in North America around 26,000 to 19,000 years ago, the time of the Last Glacial Maximum. Widespread occupation during a period of abrupt warming, closer to the original Clovis estimate, followed.

This study acknowledges that, so far, evidence for human occupation before the Last Glacial Maximum is limited to one archeologist site: the Chiquihuite Cave.

Even Ardelean, who led the analysis of that cave, admits that what his findings are astonishing.

“It was a roller-coaster that extended over several years,” Ardelean says.

When dates were obtained from the deepest layers of sediments after the first test excavation in 2012, and preliminary data suggested that the artifacts they were finding could be 29,000 years old, Ardelean “was shocked and very skeptical and careful, as this research cannot be taken lightly and deserves full scientific seriousness.”

He put together a hypothesis, gathered more funding, and expanded the excavation in 2016. Ultimately, about 1,900 stone artifacts from various layers of earth, indicates that people lived in the high-altitude cave from about 29,000 years and 13,000 years ago.

"It was a roller-coaster that extended over several years."

This pushes back the dates for human dispersal into the Americas to as early as 33,000 to 31,000 years ago.

Ruth Gruhn, a professor emerita at the University of Alberta, writes in a related commentary published Wednesday that this initial entry date suggestion “will be very hard for most archeologists specializing in early America to accept,” adding “there will undoubtedly be challenges to this interpretation and close examination of the site data.”

The first Americans — The work of Ardelean, Becerra-Valdivia, and their colleagues’ offers another unique angle into the story of the people of the Americas: Who these people really were.

They were not, as the Clovis-theory posited, a single group with a single culture. Ardelean explains that the pre-Clovis sites in North and South America show unique artifacts and technologies — suggesting a diversity of groups with little contact between them.

“The peopling of the Americas was a rather complex and diverse process — definitely not a single foundling population,” Ardelean says. “Some of those early groups during the Late Glacial Maximum failed, probably went extinct, and represent ‘lost migrations.’”

We still don’t know exactly who the residents of the Chiquihuite Cave were or where they came from. Still, Ardelean reasons that they were likely nomads who established a wide migration territory in North America and periodically visited the Chiquihuite region, using the cave when they were there. They also used locally available stones for their tools, namely a green variety of recrystallized limestone.

These early humans also likely had “some degree of maritime or littoral adaptation,” Becerra-Valdivia says. Given the early human occupation of the cave, that means that they dispersed to the Americas when “ancient Beringia was either completely or partially submerged underwater,” she explains.

To find the answers, scientists will have to keep hunting for clues.

“Future research is required in South America,” Becerra-Valdivia says. “Only by unlocking the history of initial human occupation there, will we be able to see the entire picture and understand the full migration pattern.”

Chiquihuite Cave abstract: The initial colonization of the Americas remains a highly debated topic, and the exact timing of the first arrivals is unknown. The earliest archaeological record of Mexico—which holds a key geographical position in the Americas—is poorly known and understudied. Historically, the region has remained on the periphery of research focused on the first American populations. However, recent investigations provide reliable evidence of a human presence in the northwest region of Mexico, the Chiapas Highlands, Central Mexico, and the Caribbean coast during the Late Pleistocene and Early Holocene epochs. Here we present results of recent excavations at Chiquihuite Cave—a high-altitude site in central-northern Mexico—that corroborate previous findings in the Americas10–17of cultural evidence that dates to the Last Glacial Maximum (26,500–19,000 years ago)18, and which push back dates for human dispersal to the region possibly as early as 33,000–31,000 years ago. The site yielded about 1,900 stone artifacts within a 3-m-deep stratified sequence, revealing a previously unknown lithic industry that underwent only minor changes over millennia. More than 50 radiocarbon and luminescence dates provide chronological control, and genetic, palaeoenvironmental, and chemical data document the changing environments in which the occupants lived. Our results provide new evidence for the antiquity of humans in the Americas, illustrate the cultural diversity of the earliest dispersal groups (which predate those of the Clovis culture), and open new directions of research.

Earliest human arrivals abstract: The peopling of the Americas marks a major expansion of humans across the planet. However, questions regarding the timing and mechanisms of this dispersal remain, and the previously accepted model (termed ‘Clovis-first’)—suggesting that the first inhabitants of the Americas were linked with the Clovis tradition, a complex marked by distinctive fluted lithic points has been effectively refuted. Here we analyze chronometric data from North American and Beringian archaeological sites using a Bayesian age modeling approach and use the resulting chronological framework to elucidate spatiotemporal patterns of human dispersal. We then integrate these patterns with the available genetic and climatic evidence. The data obtained show that humans were probably present before, during and immediately after the Last Glacial Maximum (about 26.5–19 thousand years ago) but that more widespread occupation began during a period of abrupt warming, Greenland Interstadial 1 (about 14.7–12.9 thousand years before ad 2000). We also identify the near-synchronous commencement of Beringian, Clovis, and Western Stemmed cultural traditions and an overlap of each with the last dates for the appearance of now-extinct faunal genera. Our analysis suggests that the widespread expansion of humans through North America was a key factor in the extinction of large terrestrial mammals.