“It’s a bit like trying to read a landscape by looking at the shadows in the fog.” 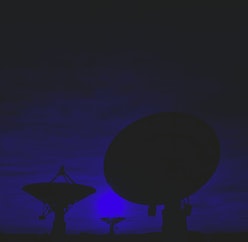 Astronomers are gearing up to look for the oldest light in the universe — the first stars ever to burst into life and shine in the aftermath of the Big Bang.

These early stars formed amid thick clouds of hydrogen, which absorb starlight and veil it from the prying eyes of astronomers today. But when those newborn stars blasted the surrounding hydrogen clouds with stellar radiation, the clouds emitted their own radiation in response like a cosmic clap back.

As the stars triggered them, th clouds sent out radio waves that originally measured around 21 centimeters long. By looking for these telltale radio waves (now stretched to several meters in length due to the time and distance they travel to reach Earth), astronomers hope to find evidence of the newborn stars that heated the baby universe.

So far, though, no one has had much luck.

“It’s a bit like trying to read a landscape by looking at the shadows in the fog,” Eloy de Lera Acedo tells Inverse.

Soon, de Lera Acedo and his colleagues hope to change that — thanks to statistics.

What’s New — de Lera Acedo and his colleagues recently used computer simulations to test their method (and a new telescope design) for detecting these radio signals. They published the results on Thursday, July 21, in the journal Nature Astronomy.

“We want to separate the tiny cosmological signal we are looking for from the much brighter signals coming from other places, like our own galaxy,” says de Lera Acedo.

Looking for radio waves emanating from primordial clouds of hydrogen is, perhaps unsurprisingly, a challenge. In part, the issue is that there’s an entire universe between us and those first stellar nurseries, and the universe is full of things that also emit radio waves. Also, the radio waves from those ancient hydrogen clouds are — by the time they reach a radio antenna here on Earth — very faint. They’re so faint that they can get mixed up in radio interference from the observatory itself.

To sort the cosmological wheat from the much noisier chaff, de Lera Acedo and his colleagues use Bayesian statistics, a method of number-crunching that relies on machine learning to calculate the probability that a datum fits into a specific category.

“We want to quantify the probability that something in our data is introduced by our telescope or coming from the sky, and what are those relationships between the different components,” explains de Lera Acedo. And according to the simulations they ran recently, it works. Later this year, they'll test it with real-world observations.

Why it matters — If de Lera Acedo’s method works, then it will enable the astronomers to pick out the faint radio waves from hydrogen clouds heated by the first stars, even amid all the radio racket in the universe. The data will help fill in a missing chapter in the universe’s history: The era when the first stars formed and ignited, bathing the universe in radiation, and forging heavier elements in their cores. Elements that eventually made all we know.

“We know fairly well what happened at the beginning with the Big Bang [thanks to] the cosmic microwave background radiation. We now see a lot [of data] about the latest evolution of galaxies and stars,” de Lera Acedo expains.

“What we haven't seen yet is how we went from this empty, vast volume that was the universe after the Big Bang, to the realm of celestial objects that we see with Hubble.”

The distance the signal travels to get to Earth will reveal how old it is, offering a clue about when the first stars lit up. Other properties, like variations in the signal’s amplitude, could reveal even more. Higher amplitude suggests that the signal came from a hotter cloud than a lower amplitude signal.

“Those variations represent the history of temperatures in the universe: How hot were these hydrogen clouds?” asks de Lera Acedo.

“And if they are being heated up, it’s because something was in them.”

Astrophysicists have several theoretical models of the early universe, despite very little available data. But de Lera Acedo and his colleagues can compare their temperature data to these existing models. Once they find a good fit, they can be pretty confident that the model’s predictions about other properties of the early universe — like the mass of the star-forming clouds and the rate at which new stars were born — are also accurate.

And just like that, we’ll know much more than we do now about our universe’s toddler years.

“It will complete or at least add to our understanding of the universe, the evolution of the universe, and our position within that universe — how it all came to be as it is,” says de Lera Acedo.

How It Works – Because Bayesian statistics is based on machine learning, de Lera Acedo and his colleagues first had to teach their program what each type of signal — telescope interference, radio signals from inside our galaxy, and actual evidence of the universe’s first light — look like.

They “trained” their algorithm on measurements of radio interference from the team’s telescopes, along with data from radio observations of nearby objects in our galaxy. No one has detected radio emissions from the universe’s first stellar nurseries yet, so de Lera Acedo and his colleagues simulated the signal based on theoretical models, which predict what such radio waves should look like by the time they reach Earth.

The team used the data to build a computer simulation of the universe — or at least most of the radio signals in it — and two radio antennas currently being built in South Africa (more on that later). That simulation also gave the algorithm the knowledge it needed to do the actual Bayesian statistics calculations. For any radio signal the algorithm sees, it can calculate the probability that the signal is telescope noise, something in the Milky Way, or something much older, based on the signal’s properties.

What’s Next – As we speak, de Lera Acedo and his colleagues at the REACH (Radio Experiment for the Analysis of Cosmic Hydrogen) project are constructing a pair of radio antennas in the Karoo Central Astronomy Advantage Area in South Africa. The Karoo is a 106,300 square kilometer swath of desert where the South African government has banned radio transmissions, providing a quiet zone for radio telescopes to focus on signals from the sky with a minimum of earthly airwave pollution.

By the end of 2022, REACH’s two new antennas will be searching for radio signals from the most distant reaches of the universe. With those antennas and a lot of statistical calculations, de Lera Acedo and his colleagues hope to find radio waves emitted by primordial clouds of hydrogen heated by the first stars.

And although de Lera Acedo says those observations could fill a huge gap in our understanding of the universe, he also acknowledges that they’ll only be the beginning.

“There will be other experiments and other telescopes coming in the future that will be more powerful or will be able to give us even a lot more information,” he says.

“So we will be able to tell a lot more about how those first stars were born and what happened there.”

But for now, we can learn a lot just by mapping shadows in the fog.