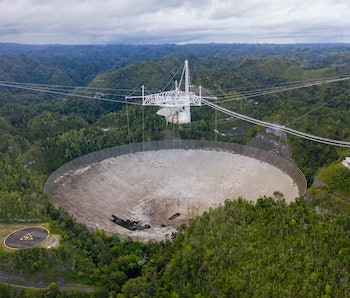 Jorge Santiago-Ortiz had been holding back tears all Tuesday morning after hearing of the collapse of the instrument platform of the Arecibo Observatory.

"It's heartbreaking," Santiago-Ortiz tells Inverse. "It's really sad because it means so much."

On Tuesday, the instrument platform of the 305-meter telescope at Arecibo Observatory fell after a cable snapped, at approximately 7:55 a.m. Atlantic Standard Time. The event caused damage to the dish and the surrounding facilities. It was the latest blow to the historic observatory, that has served as an essential lookout onto the skies for 57 years.

Santiago-Ortiz, a scientist in the field of gene therapy, grew up an hour's drive away from the observatory in Arecibo, Puerto Rico, and recalls going on a school field trip to visit the observatory when he was in middle school. The trip introduced him to local scientists and inspired him to go into the field of science himself.

"Growing up, I wasn't familiar with how science worked," Santiago-Ortiz says. "But to know that groundbreaking science was taking place less than an hour away from me made me believe I could become a scientist one day."

Constructed in 1963, the Arecibo Observatory was the world's largest telescope of its kind. Its reign only ended years later in 2016 when China built the FAST radio telescope:

The radio telescope was also quite popular as it was featured in Carl Sagan's novel Contact, the 1995 Bond movie Goldeneye, and an image of pulse waves captured by Arecibo made the album cover for Joy Division's Unknown Pleasures.

Arecibo has a 1,000-foot long dish that spans over 20 acres in the municipality of Arecibo in Puerto Rico and its sheer size makes for more accurate, sensitive observations of the universe.

But the observatory will soon shut its cosmic wide eyes.

On November 19, the National Science Foundation (NSF) announced that they will begin plans to shut down the Arecibo Observatory after assessing damage caused to the telescope by an unfortunate incident.

An auxiliary cable that was designed to last another 15 to 20 years suddenly broke on August 10, and crashed into the radio telescope's reflector panels, tearing a 100-foot gash in the main dish. And the NSF later decided that they cannot repair the observatory without risk to construction workers and staff at the facility.

Unfortunately, the observatory would suffer another incident later on with the collapse of its platform, delivering one final blow to the telescope.

“We are saddened by this situation but thankful that no one was hurt,” NSF Director Sethuraman Panchanathan said in a statement. “Our focus is now on assessing the damage, finding ways to restore operations at other parts of the observatory, and working to continue supporting the scientific community, and the people of Puerto Rico.”

For Santiago-Ortiz, who had launched a petition to save the Arecibo Observatory, the loss for the community would be profound.

"I’m Puerto Rican and I care a lot about diversity and inclusion efforts," he says. "The observatory has played an important role in increasing representation for minorities in science and engineering."

On the scientific side, researchers will be left without a vital tool to observe the skies.

Anne Virkki, a research scientist at the Arecibo Observatory and serves as the leader of the Planetary Radar Science Group, has been using the telescope to observe 100 to 200 near-Earth objects a year and determine their chances of hitting Earth.

Vikki spoke with Inverse in August and said that all observations were down since there is no other facility that can be used for the same type of work.

"We [Arecibo] are the most powerful and sensitive planetary radar in the world," Virkki says. "We have some special capabilities, the images we can get are completely unparalleled, unless there’s a spacecraft sent to a specific target, we can get these very fine images of tens of objects every year."

As scientists mourn the loss of the Arecibo Observatory, there may still be an opportunity to rescue another observatory on the other side of the world.

The Kwasan Observatory, established in 1929 as the second-oldest university observatory in Japan, is in need of funding in order to continue its operations as a key observer of the Sun.

Kyoto University has been planning to shut down the observatory's operations as it scales down on its budget in order to make room for new facilities to be built by scrapping older ones. However, the people behind the observatory have launched a campaign asking for funds to be donated to the Kwasan Observatory.

Meanwhile, those who remain attached to the Arecibo Observatory are still hopeful about its revival.

Santiago-Ortiz will begin advocating for the rebuilding of the observatory, with even more advanced technology, rather than just repairing it as is.

"I'm certainly hopeful," he says. "Just because of how much the observatory has meant for science and education."

More like this
Science
5.12.2022 8:45 PM
China finds recent water flows on Mars, with big implications for alien life
By Charles Q. Choi
Science
14 hours ago
We now have an image of the Milky Way’s central black hole — here’s how it happened
By Elizabeth Howell
Science
15 hours ago
A skyscraper-sized asteroid is wandering toward Earth
By Brooke Edwards
Related Tags
Share: