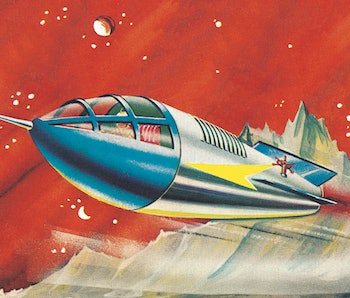 As scientists explore further into the universe, the probability of finding alien life is growing.

But if we want to discover aliens, we need to get over ourselves first, astrobiologist Samantha Rolfe tells Inverse. Ultimately, finding extraterrestrial life requires a complete overhaul of how humans define life.

Here's the problem: Our understanding of life depends a pretty narrow range of experience — the only life we know of, after all, is that observed on Earth, Rolfe, who teaches at the University of Hertfordshire, says.

Which begs the question: Even if we could see an alien life form, would we recognize it as one?

In fact, alien life may be right here on Earth, and we just don't know it yet, Rolfe says.

"We're just somehow so oblivious to it that we don't detect it, but it exists alongside us?"

“Because we are so focused on what we know... it is hard to sort of imagine how we would detect something we know nothing about,” she says.

“So that's a really big problem in itself.”

To get a handle on this idea, think of the smallest life forms we do know about, microbes. These are tiny organisms that humans can not see with the naked eye, and we discover new species of them every day. There may be trillions upon trillions of microbes we do not yet know about.

Scientists call this the shadow biosphere — a hypothetical world of microbes that live on Earth, but which we are yet to detect. Technically, anything that exists outside of human comprehension and can not be seen may be part of the shadow biosphere, Rolfe says.

“We know [microbes and germs] exist because we get ill and if there's a large enough number of them on a petri dish in a lab, then we can see the colony of microbes,” she says.

“But individually, you know, we don't see them day-to-day.” Indeed, up until approximately one hundred years ago people had no idea microbial life existed at all.

If we follow this same line of reasoning, there might be more, alien life forms roaming Earth — we just don't notice them.

“So if a shadow biosphere on earth exists, well, do we not see [alien life]?” Rolfe asks.

“We are just somehow so oblivious to it that we don't detect it, but it exists alongside us?”

If not carbon, then what?

Part of humanity's blinkered view on life comes down to the fact that all biology on Earth shares one key trait: It is based on carbon.

Pinpointing the difference between what is living and what is not might seem easy — at first. But if we want to find aliens, we may need to reframe our most fundamental understandings of what life can be made up of.

There could be life on other planets and moons based on entirely different chemistries, Rolfe says. As a result, we might not know how to look for it.

“It’s guesswork and I'm just sort of educated guess really, considering that we don't have an example of it,” Rolfe says. One alternative chemistry may be suggestion that there could be silicon-based life, for example.

“We see it in science fiction quite a lot. The obvious example being I think in Star Trek with Mr. Spock, who is a silicon-based life form, although also a humanoid alien.”

"In terms of the whole universe, we have got a lot to learn."

Here on Earth, all biological molecules are founded upon carbon chains, Rolfe says. Silicon is similar to carbon, in that it has four electrons that can bond with other atoms. So it may be possible to build long chains of silicon molecules, too — and create something resembling life.

“If silicon was able to build complex life, then it would end up evolving into a humanoid in the same way that humans have,” Rolfe says.

If silicon life were to form, then the conditions of these extraterrestrials' planet would have to be quite different to the Earth. Conditions on Earth are not suited to a silicon-based biology. But computer simulations may be able to reveal the ways silicon could form the backbone of life on other worlds.

Other worlds could hold even more exotic life forms, Rolfe says. Titan, a moon of Saturn which has a very different chemistry to Earth, may host a hydrocarbon-based life form, for example.

“So maybe silicon isn't even the most interesting one, maybe something more Titan chemistry based,” Rolfe says.

Is there anyone out there?

The answer might already be on its way to us.

“In 1974, we purposefully sent out a message that gave basic information about what Earth was like, and how we count, and where the Earth is in our Solar System and such,” Rolfe says.

This message is the Arecibo message. It was aimed at a star system a (mere) 25,000 light years away, so it would take a long time for any return message to reach us, she says.

“There are lots of people that are always asking: Are we alone out there? And it depends on your definition of life of course,” Rolfe says.

“How do we scientifically test for something, whether it's alive, at what point do you draw a line, if at all?”

To demonstrate just how wild life could be, it may be argued that the Sun is a living entity because it’s creating something from an energy source, Rolfe says.

“But that's just a philosophical idea.”

“In terms of the whole universe, we have got a lot to learn,” she says.

One way to discover what alternative life might look like, is to pay attention a little closer to home. Creatures on Earth can reveal new ways of detecting other types of life.

“Realizing that animals are just amazing and that we are not the evolutionary pinnacle," would be a start, Rolfe says. "We can learn a lot more from nature.”

“If we can understand a lot more fundamentally about how biological life works on a fundamental level, then we can push the ideas of what it is and where it could exist," she says.