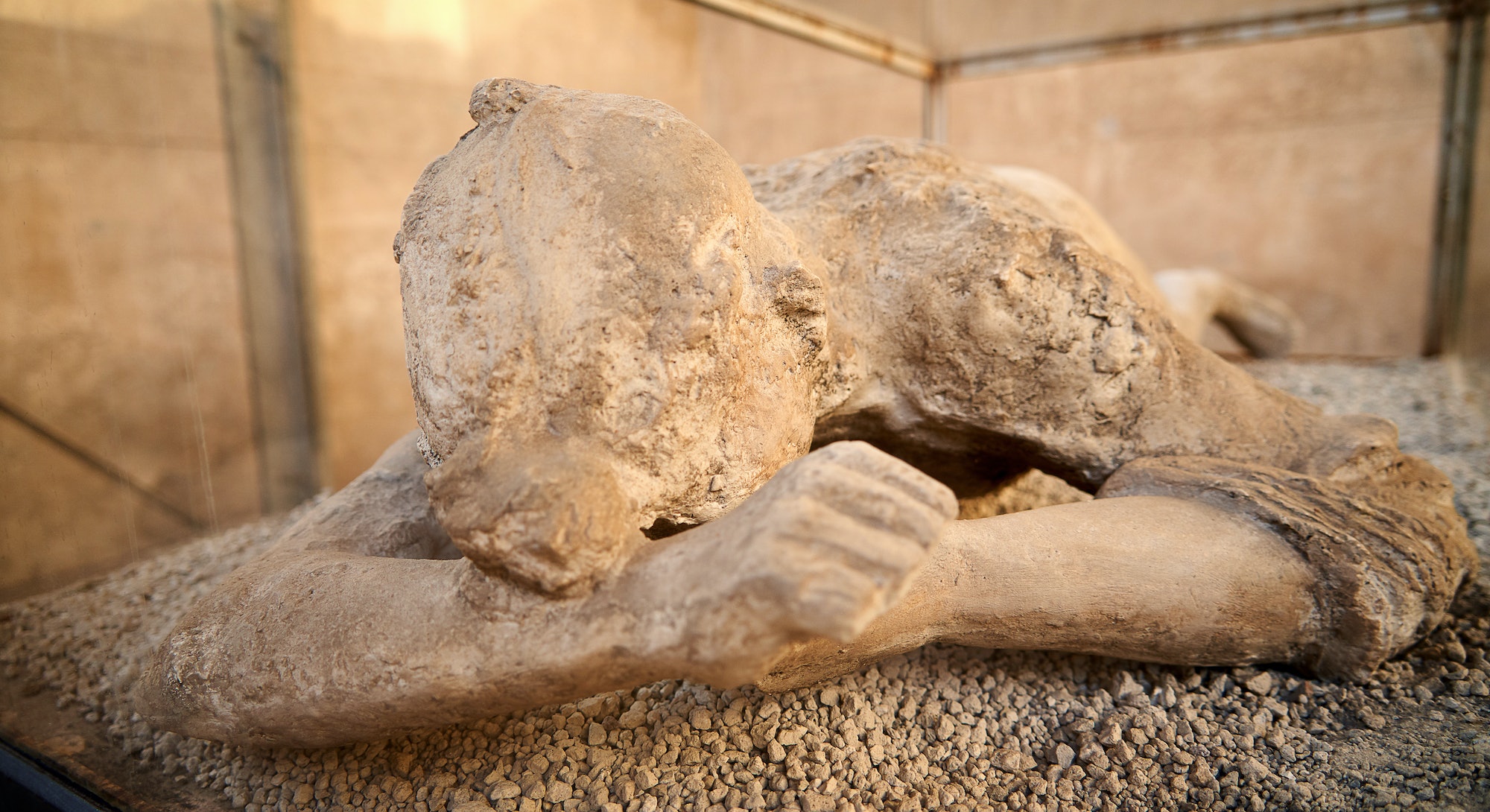 Inside a dining room, the Roman lay back on his triclinium as the eruption of Mount Vesuvius began.

Every movement of the earth as the volcano came alive made him grimace in pain — indeed, any sudden or strong movement could make him wince. A mere cough was enough to trigger pains. His pain would quickly end, however.

As the volcano overlooking Pompeii began to erupt in 79 C.E., the force of the seismic activity shot ash and other material into the air, triggering pyroclastic flows — sending scorching ash, gas, and other debris barreling through the Ancient Roman town. The suffocating, hot ash killed almost half the populace within moments. This ailing Roman was among them — a grisly, but mercifully fast, end to a painful life.

Now, thanks to the latest genetic analysis tools, researchers are getting a glimpse into who this man was, how he lived, and what relationship he bore to the ancient people of Pompeii and modern Italians today. It is thanks to this groundbreaking research that we now know how great his suffering must have been in the time before he died.

What’s new — In a study published Thursday in the journal Scientific Reports, researchers describe the first successful genome sequencing study of an individual who perished at Pompeii. The analysis confirms an old hypothesis that the body belongs to that of a male aged between 35 and 40 years old at the time of death. It also reveals new details, including that he appears to have many typical Ancient Roman genetic traits, but with a twist, explains lead researcher Gabriele Scorrano, an assistant professor at the University of Copenhagen.

“Individual A looks very similar to other Imperial Roman Age genomes we have available, but with a twist. Some of its genetic profile — the Y chromosome and the mitochondrial DNA — is very unusual for both the time and location,” Scorrano tells Inverse.

“At the time of his death, the man... probably suffered strong back pain.”

“Actually both his lineages were very rare. What we believe it means is that he represents some Iron Age genetic diversity that was lost due to the homogenization of the Italic peninsula after the Roman Empire,” he says. Specifically, the individual’s Y chromosome line appears to be most similar to that of individuals in Sardinia, an island off the Italian coast.

Interestingly, the researchers also found evidence the man suffered from Pott’s disease — this is a kind of musculoskeletal tuberculosis, which can cause deformation of the spine and intense pain on moving, even breathing too hard.

“At the time of his death, the man... probably suffered strong back pain, exacerbated by exertion or coughing and sometimes accompanied by sciatica, muscle contraction, which causes pain, and generalized weakness, especially in the lower limbs, limits the mobility of those affected,” Scorrano explains.

Why it matters — The study involves two skeletons discovered at the site inside the Casa del Fabbro — the House of the Craftsman (in this case, likely a cabinet maker, according to some accounts). Excavated at various times throughout the last century, the house and its preserved occupants offer a window into life as a middle-class Roman citizen in Pompeii. But aside from the ancient history, the study is also a rarity in terms of the depth of genetic analysis Scorrano and his colleagues managed to pull off — generally, heat destroys DNA and other genetic material.

It is actually the same logic of why we put food in the fridge, to slow down molecular reactions,” Scorrano says. Indeed, the Pompeiian man was found with another body — likely a 50-year-old woman — but the remains of this person could not be analyzed as there was too little material to work with.

“The preservation of ancient DNA is always a challenge.”

“Because the bodies in Pompeii were enveloped in high-temperature ash, this could very well have been the reason why one of the individuals did not yield sufficient DNA for us to analyze,” Scorrano says.

“I think the main surprise was that one of the individuals had a good DNA preservation. We believe that the ash kept the individual in an anoxic environment, thus slowing down the DNA degradation, but it is hard to be sure at this stage,” he adds.

“The preservation of ancient DNA is always a challenge,” says Scorrano’s co-author and colleague on the study, Serena Viva, a postdoctoral researcher at the Università del Salento in Italy, “especially the remains from individuals who died during the eruption and suffered a severe heat shock.

“Only thanks to the most innovative techniques was it possible to sequence the genome of the male individual,” she explains.

Digging into the details — One of the most interesting — and horrifying — findings from this study is that the man must have lived in agony before he was burnt alive by the eruption of Vesuvius. Found lying on a triclinium — basically a chaise longue — he would have had poor mobility and chronic pain as a result of having Pott’s disease. This form of tuberculosis was common in his time and place — but how it scarred his bones is distinctive, Viva says.

“This disease was endemic in Imperial Roman times, but it is rare to find it in archaeological contexts because it only manifests skeletal changes in small percentages,” Viva says.

The man’s spinal vertebrae show signs of wasting as a result of his disease, suggesting he had at least one collapsed vertebra in his backbone.

But there is also the question of how this individual fit within the fabric of Roman society. His tuberculosis is a sign of the perils of urbanization in Roman Italy — as cities became more densely populated, diseases like tuberculosis spread more rapidly.

In turn, Iron Age Italy — circa 1000 B.C.E. — appears to have experienced migration from the Middle East and other areas, evident in the diversification of the Italian genome from this period. Yet this man’s genes suggest a less cosmopolitan origin story within Italy itself — they also suggest he was not a slave.

“It is plausible to think that, thanks to the expansion and the increase in effective population size during the Roman Imperial Age, the Roman genetic pool could have contributed to the nearby populations with a genetic signature that can still be recognized in the extant Mediterranean regions today. Consistent with the autosomal results that show a high affinity of individual A with Neolithic Anatolians, its Y-chromosome haplogroup is presently only found among present-day Sardinians,” the authors write in the study.

What’s next — This study is a first — but Scorrano and his team hope it will not be the last.

“The results in Pompeii show us clearly that there is still a lot to learn on the genetic diversity of the Roman period, but also about the populations before them, the so-called Pre-Roman Italic populations,” Scorrano says.

“Very little is known about them, and even their relationship with the Romans and present-day Italians is uncertain.”

In the paper, Scorrano and his co-authors say the work “confirms and demonstrates the possibility of applying paleogenomics methods to study human remains” from Pompeii. It could act as a blueprint for future studies to perform similar analyses and glean more clues to life in Pompeii before Mount Vesuvius’ historic eruption wiped it off the map.

“Supported by the enormous amount of archaeological information that has been collected in the past century for the city of Pompeii, their paleogenetic analyses will help us to reconstruct the lifestyle of this fascinating population of the Imperial Roman period,” the authors write.