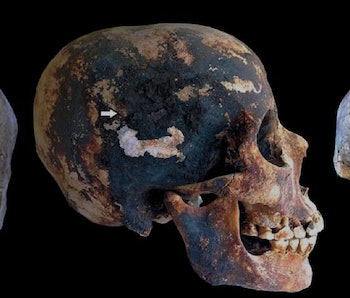 Nearly 2,000 years ago, when Mount Vesuvius destroyed the towns of Herculaneum and Pompeii, the volcano wasn’t the only thing that exploded. While researchers long assumed victims were suffocated to death by dust and ash, new evidence presented in the journal Plos One indicates that some victims died in a much more gruesome way: As their blood instantly vaporized in their veins, their brains boiled and burst from their skulls.

In the study, an Italian research team presents a new look at Vesuvius victims who unsuccessfully sought shelter in a dozen boathouses on Herculaneum’s coastline. The skeletons, first unearthed in the ‘80s, bore curious marks: sharp fractures that were stained dark red and brown. They also looked like they’d been caught off-guard: Rather than appearing to shield or protect themselves, they weren’t contorted into defensive poses.

Instead of dying by suffocation, the team theorizes, these people died nearly instantly as their blood and soft tissues vaporized in the searing heat.

Pier Paolo Petrone, a biomedical researcher at the University of Naples Federico II and the study’s first author, tells Inverse that he’d long been suspicious of the suffocation hypothesis.

“The ‘life-like’ stance of the victims was telling to me that differently than previously believed, once engulfed in the hot surge cloud, people died instantly, since no evidence of protective attitudes or agony contortion could be detectable,” he says.

Petrone was part of a team that studied these same bones in the ‘90s, introducing their blood vaporization hypothesis for the first time in a paper published in the journal Nature in 2001.

At the time, they noted the hyper-flexed toes and charred bones that indicated instantaneous death. Furthermore, many of the bones bore features resembling those of cremated human remains. “Some of the skeletons have articulated fractures, as seen in incinerated bodies, and the inner skull surfaces, cranial openings and unclosed sutures are blackened from the effects of high temperature on the skull cap under increased intracranial pressure,” the team wrote.

They also noted the skeletons’ lack of defensive postures, suggesting that they’d had no time to even react to the heat and ash bearing down upon them. If they’d died in a cloud of hot dust, they write, their muscles would have contracted, contorting them into a “pugilistic attitude” — the defensive posture of a boxer. Some of the remains showed partial evidence of this posture, but none of them showed it fully, suggesting the muscles were vaporized before they even had a chance to contract.

Despite this initial evidence, the suffocation hypothesis ended up becoming more widely accepted. “At that time, not very much attention was given to the environmental context,” says Petrone of the efforts to study the skeletons in the ‘90s. “After removal, these human remains have been repeatedly studied by several anthropologists, but no one of them had any information about the site context.”

In the new study, Petrone and his team support their gruesome “sudden body fluid vaporization” hypothesis with new evidence in the form of chemical analysis.

He and his colleagues used two analytical chemistry techniques, plasma mass spectrometry and Raman microspectroscopy, to confirm that the stained portions of these bones contained high levels of iron and iron oxide. This, they suspect, is the signature of vaporized blood, the stains left behind by steamed blood and brain. Heme, a protein that’s part of hemoglobin, carries iron, so where there’s blood, there’s iron.

Taking this new data into account with the old paints a horrific picture of the catastrophic explosion. The speed and temperature at which is occurred is unfathomable. The first surge of gas and ash, which may have been as hot as 900 degrees Fahrenheit and traveled nearly 200 miles per hour, dealt the death blow, creating clouds of steamed blood within the victims’ bodies. The ensuing flow of ash that fell over the next two hours preserved the bodies in place.

Besides a gruesome historical curiosity, this research has significant implications for the residents of Naples. The third-most populous city in Italy lies just over seven miles from the volcano — well within the range of a Plinian eruption, in which the volcano ejects gas and ash in a narrow stream that can reach miles into the air. Based on archaeological and geological evidence, researchers suspect that Vesuvius erupts approximately every 2,000 years. And it’s been 1,939.

In AD 79 the town of Herculaneum was suddenly hit and overwhelmed by volcanic ash-avalanches that killed all its remaining residents, as also occurred in Pompeii and other settlements as far as 20 kilometers from Vesuvius. New investigations on the victims’ skeletons unearthed from the ash deposit filling 12 waterfront chambers have now revealed widespread preservation of atypical red and black mineral residues encrusting the bones, which also impregnate the ash filling the intracranial cavity and the ash-bed encasing the skeletons. Here we show the unique detection of large amounts of iron and iron oxides from such residues, as revealed by inductively coupled plasma mass spectrometry and Raman microspectroscopy, thought to be the final products of heme iron upon thermal decomposition. The extraordinarily rare preservation of significant putative evidence of hemoprotein thermal degradation from the eruption victims strongly suggests the rapid vaporization of body fluids and soft tissues of people at death due to exposure to extreme heat.