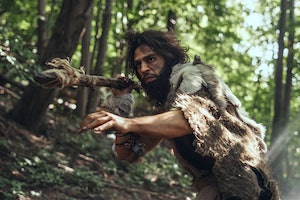 Archaeologists have long linked ancient tool use to the beginning of human history.

Homo habilis, the theory goes, was the "handy man" who used tools and served as the intermediary species between the more primitive Australopithecus and the more advanced Homo erectus.

Some scientists assumed that manual dexterity — linked to thumb grasping — evolved right alongside the first depictions of tool use in ancient peoples like Australopithecus, who went extinct around 2.95 million years ago.

But what if scientists got the timeline wrong?

This altered timeframe suggests the ability is uniquely associated with later-arising species and possibly the catalyst for the gradual development of complex culture.

How they did it — Previous archaeological studies on manual dexterity — the ability to grasp objects — compared ancient people's bones to the bones of modern-day humans, assuming that the two would share similar evolutionary features.

This study, however, compared the biomechanics or efficiency of thumb use across ancient peoples, modern-day humans, and existing primate species — our closest living relatives.

The researchers, in turn, compared modern humans and ancient peoples to chimpanzees. Like humans, chimpanzees' hand muscles have developed unique biomechanics, making them an ideal specimen for understanding the evolution of thumb grasping in humans.

The researchers cross-compared these special hand features across species by creating 3D maps of the bones, showing exactly where muscles attach to the bones. They also focused on a particular thumb movement, which is similar in both chimpanzees and humans.

In particular, researchers focused on the contraction of one specific muscle: opponens pollicis, which they describe as "a muscle of vital importance for thumb opposition."

"Importantly, we were able to validate the predictions of our models by confirming that the differences observed between living taxa — chimpanzees and modern humans — reflect those reported from past experimental studies," Karakostis said.

What they found — Through their 3D cross-species analysis, the researchers found, when it came to generating modern human-like force using their hands, the supposed original ancient tool user Australopithecus fell short.

Instead, they fell somewhere between humans and chimpanzees in their force-generating capacity.

This doesn't mean that Australopithecus didn't use tools — it likely did. But despite their human-like thumb and wrist movements, Australopithecus' biomechanics just weren't as efficient compared to modern humans.

"Its skeletal morphology would not permit a modern human-like level of opposition efficiency," the study team writes.

Of all the ancient peoples studied, only one specimen, known as SKX5020, fell within the range of modern humans when it came to manual dexterity. This hominin specimen was found in Swartkans, South Africa and it's unclear exactly what hominin it represents.

Based on the age of that fossil specimen SKX5020, the researchers concluded that manual dexterity didn't truly develop in some ancient humans until 1.8 to 2 million years ago.

The researchers suggest stone tool use and animal butchering also became more pronounced around this time, suggesting a correlation between tool use and the development of modern human dexterity.

Why it matters — Why should we care about ancient people's thumbs? Because it is a defining aspect of what it means to be human.

"Increased manual dexterity in the form of efficient thumb opposition was among the early defining characteristics of our lineage, providing a formidable adaptive advantage to our ancestors," co-author Katerina Harvati, a researcher affiliated with the Eberhard Karls University of Tübingen, said.

"It is likely a crucial element underlying the development of complex culture over the last 2 million years, shaping our biocultural evolution."

Getting the timeline of thumb evolution right is vital to understanding not only how ancient humans developed, but how modern-day humans evolved too.

What's next — The study's limitations, however, suggest that archaeologists still have a long road ahead when it comes to figuring out the evolution of dexterity in humans. While exciting, this research only focuses on a single muscle and its corresponding movement.

There may be other crucial muscles in the hand that scientists in this study missed, which future research can cover — unlocking more mysteries about human evolution.

Summary: Systematic tool production and use is one of humanity’s defining characteristics, possibly originating as early as >3 million years ago.1–3 Although heightened manual dexterity is considered to be intrinsically intertwined with tool use and manufacture, and critical for human evolution, its role in the emergence of early culture remains unclear. Most previous research on this question exclusively relied on direct morphological comparisons between early hominin and modern human skeletal elements, assuming that the degree of a species’ dexterity depends on its similarity with the modern human form. Here, we develop a new approach to investigate the efficiency of thumb opposition, a fundamental component of manual dexterity, in several species of fossil hominins. Our work for the first time takes into account soft tissue as well as bone anatomy, integrating virtual modeling of musculus opponens pollicis and its interaction with three-dimensional bone shape form. Results indicate that a fundamental aspect of efficient thumb opposition appeared approximately 2 million years ago, possibly associated with our own genus Homo, and did not characterize Australopithecus, the earliest proposed stone tool maker. This was true also of the late Australopithecus species, Australopithecus sediba, previously found to exhibit human-like thumb proportions. In contrast, later Homo species, including the small-brained H. naledi, show high levels of thumb opposition dexterity, highlighting the increasing importance of cultural processes and manual dexterity in later human evolution.