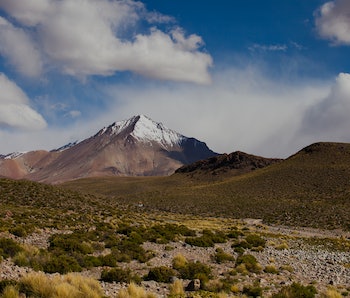 In a cave in present-day Bolivia, scientists this year found something remarkable: a cache of drug paraphernalia, stashed in a small pouch that dates back 1,000 years.

A study published in May in the journal Proceedings of the National Academy of Sciences presents archeological evidence of the consumption of psychoactive drugs by ancient peoples, and that it may have been more common than previously believed.

The international team of archaeologists identified traces of five different psychoactive chemicals in a leather bag made from three fox snouts, which dates back to somewhere between 905 and 1170 CE.

The pouch was found in an archeological site in Cueva del Chileno, a rock shelter in the Andes in present-day Bolivia.

Using liquid chromatography in tandem mass spectrometry, they found that the kit contained traces of cocaine, dimethyltryptamine (DMT), harmine, bufotenine, and benzoylecgonine — psychoactive chemicals that are all found in various plants native to South America.

“Our results indicate that this is the largest number of psychoactive compounds found in association with a single archaeological artifact from South America,” the team of researchers commented. “The chemical residues of at least five compounds that are known to have psychotropic effects on humans, present in the fox-snout pouch, imply that multiple plants were used to induce extraordinary states of consciousness, potentially within a range of ritual and healing contexts.”

The objects also included animal-skin pouches and a headband, as well as spatulas, two trays, and an intricately carved tube — which the archeologists suspect may have been used for sniffing the plant-based psychedelic drug.

The new finding also showed that the plants used to produce these drugs do not grow in the same area where these artifacts were found, suggesting that there may have been an established international trade in psychedelic substances.

The site is located in the mountains, at an elevation of almost 13,000 feet above sea level, while most of these plants grow in the lowland forests of the Amazon.

“Because these plants are foreign to the Lípez highlands, it remains to be established whether they were acquired through trading networks or directly by the shamans themselves,” the researchers write.

As 2019 draws to a close, Inverse is counting down the 25 science stories from this year that made us say “WTF.” Some are incredible, some are icky, and some are just plain strange. This has been #16. Read the original article here.

More like this
Science
6.28.2022 10:00 AM
How are drugs absorbed in the body? The science of medicine, explained
By Tom Anchordoquy and The Conversation
Science
6.28.2022 7:00 PM
Cosmic rays could erase evidence of past life on Mars
By Kiona Smith
Science
6.21.2022 10:45 AM
Ancient stalagmites point to a massive drought that upturned 6th century Arabia
By Allison Parshall
Related Tags
Share: