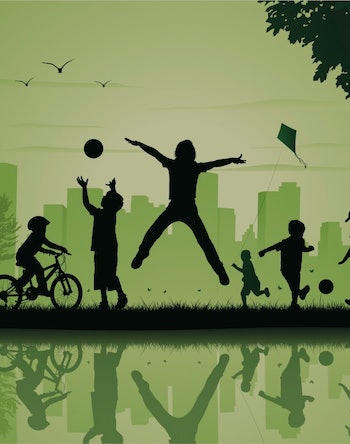 Gloomy, gray cityscapes making you crave the feeling of sitting beneath a lush, green tree canopy? You aren’t alone. But there is more to being in nature than lifting the spirits or breathing fresh air. It could add years to your life.

People in urban areas worldwide who live close to a park, garden, or other natural area are at lower risk of premature death, according to a scientific review published this week in The Lancet Planetary Health.

Researchers used a “vegetation index” to measure the density of flora living in any given area. On their scale, tropical rainforests would get a score close to 1, while barren rock or sand would score closer to 0.

They found that the higher the vegetation index, the lower the rate of premature death. The fact that parks are good for you is no surprise. But more intriguing is what happens to people’s health when green spaces change. When an area’s vegetation index increases by just 0.1, the people who live within a third of a mile from it lower their rate of premature mortality by around 4 percent. In other words, the more plant life you have around you, the better your chances of living a longer life.

Studies from the United States, Canada, Spain, Italy, Australia, Switzerland, and China all showed the same trends, the meta-analysis found. Together, those studies included more than eight million people.

The analysis doesn’t answer the question of why proximity to plants is a boon to human health. But this confirms the assumption with big data — being near green spaces really is good for you (the more, the better), and the effect likely applies no matter where you are in the world.

More than half of the world’s population lives in cities, and the number is rising. This means the public health benefits of these green spaces could affect a lot of people.

But some cities have better access to green space than others — which means certain people might be losing out on those extra years. People living in Atlanta, Dallas, and Portland, Oregon are all doing well, with 850 square feet or more of green space per resident, according to GeoTab. New York City, Boston, and Miami are barren wastelands by comparison, with less than 200 square feet per resident.

Green space’s benefits aren’t limited to physical health, either. Mental health improves when people are close to leafy green spaces. In a study published earlier this year, for example, researchers found that growing up in nature led to better mental health across a person’s lifespan.

The type of green space makes a difference. Between grass, shrubs, and tree canopy, tree canopy coverage has the greatest payoff for humans’ health, and is associated with lower psychological distress.

They can also improve your quality of life in other ways: Urban green spaces curb air pollution, noise, and the urban heat island effect.

Together, the results suggest cities should step up their urban greening programs and keep public parks public — the lives of their residents may depend on it.

Background: Green spaces have been proposed to be a health determinant, improving health and wellbeing through different mechanisms. We aimed to systematically review the epidemiological evidence from longitudinal studies that have investigated green spaces and their association with all-cause mortality. We aimed to evaluate this evidence with a meta-analysis, to determine exposure-response functions for future quantitative health impact assessments.

Findings: We identified 9298 studies in MEDLINE and 13 studies that were reported in the literature but not indexed in MEDLINE, of which 9234 (99%) studies were excluded after screening the titles and abstracts and 68 (88%) of 77 remaining studies were excluded after assessment of the full texts. We included nine (12%) studies in our quantitative evaluation, which comprised 8 324 652 individuals from seven countries. Seven (78%) of the nine studies found a significant inverse relationship between an increase in surrounding greenness per 0·1 NDVI in a buffer zone of 500 m or less and the risk of all-cause mortality, but two studies found no association. The pooled HR for all-cause mortality per increment of 0·1 NDVI within a buffer of 500 m or less of a participant’s residence was 0·96 (95% CI 0·94–0·97; I², 95%).