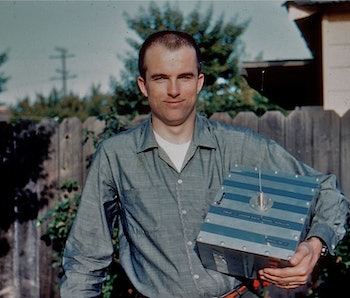 There are more than 1,600 CubeSats in orbit around the Earth, with more than 1,000 of those launching in 2020 alone. But while these inexpensive small satellites have made space more accessible to university classes, small companies, and more, their forerunners stretch back to the beginning of the Space Age.

Groups like the Radio Amateur Satellite Corporation (AMSAT), an international confederation of ham radio operators, have been flying small private satellites for years, well before the first CubeSats flew in 2003.

“CubeSats actually started with AMSAT, but they didn’t get a lot of credit for it, unfortunately,” former Lockheed satellite technician and ham radio enthusiast Lance Ginner tells Inverse.

Ginner would know. He was there at the very beginning, 60 years ago, for the design and launch of OSCAR 1, which was history-making in a few ways. It was:

It took a while, entire professional lifetimes, but virtually everything that enabled the commercial small satellite industry of the 2020s was there in an embryonic form on a Vandenberg Air Force Base launch pad on December 12, 1961.

OSCAR 1 and AMSAT, “from my perspective,” Ginner says, “absolutely invented the genre.”

What is ham radio?

Ham radio, often called amateur radio, derived its name from a derisive term for clumsy telegram operators in the 19th century referred to as “ham-fisted.” The name reflects that the technicians are, well, amateurs, often experimenting with the form in a legally allowed way.

The operators broadcast at several wavelengths using off-the-shelf equipment. It’s a hobbyist space a few notches above citizen’s band radio in both scope and distance signals can travel. Amateur radio operators often talk to each other at the same frequency. It’s one of the first big tech subcultures of the 20th century — and one that was ready for the space revolution.

The beginning of amateur space radio

An active ham radio operator in his teens, Ginner was 21 when he took a job as a technician at Lockheed Missiles and Space Company in Sunnyvale, California, in 1960.

“I didn’t know at the time, but I was extremely fortunate,” Ginner says, “because the space industry was just getting started.”

The Soviet Union had launched the first artificial satellite and spacecraft, Sputnik 1, just three years earlier, and the US had followed suit with Explorer 1 in 1958. The first crewed space flights would come in 1961.

Among many ham enthusiasts working in the space and electronics industry in what we now call Silicon Valley, the idea of getting in on the action was born. Hams at Lockheed introduced Ginner to the concept of attaching a small satellite to the Agena-A spacecraft Lockheed was building for the Air Force. “That really intrigued me, and I was right in the test area where we tested the [Agena],” he says. “That’s when I got involved.”

That involvement included more than helping design and built what would become OSCAR 1. It was a plunge into the deep end of national security politics.

“Just getting a ride was all political,” Ginner says. “Just huge conversations that were beyond me at the time when I was 21-years-old.” The Hams wanted to attach a civilian-made spacecraft to a United States Air Force spacecraft flying a classified reconnaissance mission. It took some heavyweight people to make that happen, like Republican Senator Barry Goldwater and General Curtis LeMay, Chief of Staff of the Air Force.

“It was a big leap for the Air Force to let us hop onto their mission,” Ginner says, though he was hardly waiting around. “We started building the satellite before we really had permission.”

Ginner and his fellow ham enthusiasts dubbed their satellite the Orbiting Satellite Carrying Amateur Radio, or OSCA. The group of hams building it in their garages and spare time called themselves Project OSCAR.

OSCAR 1 was a metal box, slightly curved, measuring 30 by 25 by 12 centimeters, and weighing just less than 10 pounds, a design born out of the raw necessity of hitching a ride where it could on an Air Force Agena spacecraft.

“As you see, in some of the pictures, it kind of fits in a little cubby hole near the engine,” Ginny says. “So the shape was determined by where we could put it.”

There was some discussion about whether to attempt to deploy OSCAR 1 or keep it attached to the Agena, Ginny says, but Project OSCAR ultimately wanted to have a free-flying spacecraft. “I think the Air Force probably liked that, too, because they didn’t want to have us still riding on their classified payload.”

Like Sputnik, OSCAR 1 would be a beacon, transmitting a repeating signal only. Sporting a 60 cm antenna for transmitting a simple message in Morse code, “Hi” on the 144.98 megahertz frequency using a two-meter wavelength, OSCAR 1 didn’t broadcast with much power. Solid-state electronics, specifically transistors, were just coming into their own as alternatives to much bulkier vacuum tubes, Ginner says, and “at that time, there weren’t any transistors that really put out any power at that frequency. We’re talking tens of milliwatts.”

Ultimately, the social network of hams with day jobs at Silicon Valley companies turned out to include hams at Fairchild Semiconductor International, which provide transistors the company was developing that weren’t yet on the market or even named.

When it came time to launch OSCAR 1, the Project OSCAR hams put together the 1961 equivalent of a live streaming event. “How do you get the word out around the world?” Ginner says. “We had a huge set up at Foothill College with [high-frequency radio] communications and networks. This is all before the internet, of course.”

It worked. OSCAR 1 successfully rode a Thor-DM21 Agena B to space on December 12, 1961, separated, and began transmitting to the delight of hams around the world. In the process, it beat Telstar 1, the first commercial spacecraft, to space by seven months.

“It was easy to receive. You could pick it up fairly easily,” Ginner says. “In those days, you wanted to catch every pass. So every hour and a half or so, you’re out in the ham shack, tracking this thing and counting the rate of the beeps.”

They learned a lot from those beeps, Ginner says, in part because their rate was synced to a temperature sensor. “Thermal control of satellites was very, very new,” he says, and they took their best shot, painting OSCAR 1 with metallic stripes but not quite nailing it. “The temperatures on OSCAR 1 were quite high, and we changed that design for OSCAR 2. OSCAR 2 lasted longer, and the temperatures were, you know, much more benign.”

OSCAR 1 ultimately transmitted for about three weeks, its batteries giving out by January 1, 1962 — “there were no solar panels back then,” Ginner notes — and it re-entered Earth’s atmosphere later that month.

Project OSCAR would ultimately fly five similar satellites with gradually expanding capabilities to space. For instance, OSCAR 3 was a transponder that both sent and received ham signals. The project was eventually folded into the new AMSAT organization founded in 1969.

AMSAT took the concept and ran with it, launching more than 100 subsequent OSCAR satellites of various designs over the ensuing decades. The most recent sat launched in June, MIRSAT-OSCAR 112.

“AMSAT still is pretty big,” Ginner says. “They’re doing some really cutting edge engineering, which is as good or better than you can do out in the private sector.

OSCAR 1 may seem quaint in the era of mega-constellations such as SpaceX’s Starlink, but the original small satellites remain the forerunners of much of the commercial space industry today. And some of them are still around, like AMSAT OSCAR 7.

“What’s really neat is the ham community is big enough where they listen for old satellites, and occasionally they’ll come back on the air,” Ginner says. AO 7, as he calls it, was launched in 1974 and ceased operating in 1981. “It looked like the battery shorted, or something happened there, and years later, apparently the short cleared, and so when it was in sunlight, it revived.”

Ginner’s memory of Project OSCAR revived as well. When preparing to speak with Inverse, he realized it would be the 60th anniversary of the OSCAR 1 launch on December 12.

“My grandson now is the same age I was when this all happened,” he says. “It’s been a good ride.”