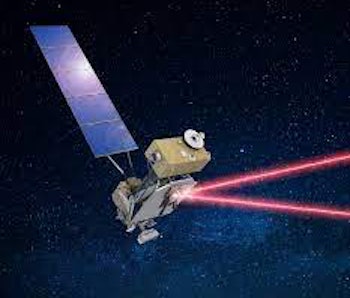 In some applications, bigger lasers mean better lasers. That is the case in astronomy, where lasers are used for everything from telescope calibration to satellite communication.

The European Southern Observatory (ESO) and some of its commercial partners have developed a laser three times more powerful than the existing industry standard.

With that increased power level, the new system has the potential to dramatically improve the way telescopes deal with one of the most fundamental problems in ground-based astronomy — atmospheric turbulence.

Regular atmospheric turbulence is commonplace on Earth and is the cause of what the human eye perceives as the stars “twinkling.” However, to a telescope, the turbulence that is unaccounted for could lead to entire data sets being thrown out. Telescopes have a standard technique to eliminate any such effects — they calibrate using a known stable star.

Giant lasers: the problem they solve

The obvious problem is sometimes there are no stars they can use to calibrate to. So scientists came up with a way of making an “artificial star” that would allow observatories to calibrate against a stable observable object no matter which direction they were facing. That technique involves blasting sodium atoms 90 kilometers up in the atmosphere with a laser.

Today that technology exists as the Four Laser Guide Star Facility, which operates the ESO’s Very Large Telescope (VLT). Coming in at a respectable 22 watts of power, this calibration tool has been essential to the VLT’s successful operation.

However, the more powerful the laser brought to bear on the sodium atoms, the more stable the calibration “star.” So ESO has bumped the power level up to 63 watts — almost a threefold increase over the existing system.

That increase is thanks to work on developing an advanced Raman fiber amplifier laser source, created by MPB Communications — a Canadian company that serves as one of ESO’s commercial partners.

They weren’t alone in developing technologies to help improve the calibration lasers. TOPTICA Photonics Ag is a German company specializing in making frequency “chirping” systems that allows the laser to bounce back and forth between several frequencies. Larger bandwidths mean more excited sodium atoms and a bright star to use for calibration.

Giant lasers: how they could help in other areas

Calibration isn’t the only thing the improved lasers are useful for, though. Satellite communication systems have become much more important lately, with SpaceX’s Starlink leading to a new era of space-based communications.

However, they are limited in their use of one of the most high-speed data transfer techniques. Optical communication between satellites and Earth itself is complicated by the same atmospheric turbulence phenomena that can throw off telescopes.

Scientists plan to install the new laser system, part of the CaNaPy Laser Guide Star Adaptive Optics system, at an ESA observatory in Tenerife, Spain. If the system proves its value, it can serve as a basis for other improved calibration and communication tools throughout the expanding observational and networking platforms spread throughout the world.

This article was originally published on Universe Today by Andy Tomaswick. Read the original article here.