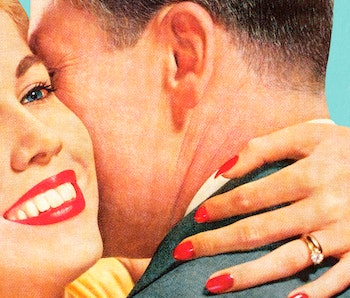 In the viral 2014 YouTube video “Hot Crazy Matrix” a bespeckled man named Dana McClendon explains that the matrix explains “everything a young man needs to know about women.” He breaks women down into seven zones, ranging from the No Go Zone (women who are unattractive and crazy) to the Wife Zone (women who are very attractive but only a little crazy).

It’s sexist and transphobic; a riff on the “Hot/Crazy scale” from How I Met Your Mother. McClendon has described it as a “harmless joke” and says he didn’t mean to become a “caricature for misogyny.” Regardless of intention, it’s hit a nerve for many: Versions of the video have been watched by millions of people, and many of the comments suggest a literal interpretation.

The video is also the inspiration behind a new paper, published in the journal Personality and Individual Differences. Its first author Dr. Alyson Blanchard is a senior lecturer at Bishop Grosseteste University and evolutionary psychologists. To her, the video, despite its many flaws, presented an intellectual query: What did its popularity say about the reality of our mating choices?

“Despite the clumsy and comedic take, what I found interesting was that it had attracted so much attention,” Blanchard tells Inverse. “Evidently, the experience of being involved in a turbulent relationship with an emotionally unstable partner is something that most people can relate to either directly or indirectly.”

So her team investigated, conducting two studies that included a total of 525 heterosexual, mostly white people. The intention was to see how partner preference changed when wealth and personality variables were adjusted — especially “dark triad traits” associated with borderline personality disorder BPD).

The team writes that “although it may sound glib to suggest that a personality disorder is desirable in a partner” the fact that BPD and other psychopathic traits are still demonstrated in non-clinical populations suggest that might be linked to some adaptive value.

Personality traits, Blanchard explains, exist on a spectrum. In this study, BPD traits describe people who are emotionally unstable, impulsive, and sensation seeking, but not to the extent that they require a psychiatric diagnosis.

“The average person might describe these types of individuals as ‘crazy’ as part of everyday parlance, however, from a scientific perspective, this can be operationalized as emotional instability,” Blanchard says.

Overall, attractiveness was the most important criteria for determining dating appeal for men. For women, personality and wealth status were the more important factors, and on average, avoided “troublesome or financially challenged men who are time and economically costly.”

"There are ‘crazy’ men out there, it’s just that women prefer not to have relationships with them."

Men, meanwhile, were more willing to say they would try out a potentially turbulent relationship — so long as they were hot. Men described women high in BPD traits as dateable if they were attractive. This suggested to the study authors that, on average, attractiveness can compensate for personality.

“There are ‘crazy’ men out there, it’s just that women prefer not to have relationships with them,” Blanchard says. “In any case, whilst there is stigma surrounding ‘crazy girlfriends,’ there is good evolutionary argument and research to show that this is just as adaptive as any other type of personality, it just depends on the context.”

Personality, she explains, evolved to help us navigate the “increasing complex social interactions that arose from living in larger communities.” Personality traits signal what a person can do for us: For example, someone is agreeable, you might see them as reliable. These traits raits arose in our evolutionary history and subsequently stabilized in populations because they’re sexually selected for.

Scientists theorize that the “dark triad” of narcissism, Machiavellianism, and psychopathy emerged, and continue to exist, because these traits exploit the fact living in a complex society means, to some degree, you simply have to trust others. Their theory continues that people with dark triad traits take advantage of this system through lying and manipulation.

“The traits needed to do this, such as charm and being effective at pretending to be someone you are not, will attract potential partners and will result in psychopathy continuing to reside within a population,” Blanchard says.

From an evolutionary perspective, men don’t have to be as careful when it comes to evaluating personality. The penalties for engaging in difficult relationships are considerably greater for women because they are more often tasked with child-rearing, Blanchard explains.

“By comparison to women, men more readily engage in potentially turbulent relationships simply because they can,” she says. “Even despite adverse outcomes, these relationships will not prevent them fathering in the future.”

This helps explain the gender-gap seen in the study. In the short-term, BPD traits can even be seen as exciting — especially if the person is attractive. Meanwhile, studies, including this one, show that men don’t necessarily think about the long-term implications of their relationship choices — at least, not at the start of the relationship.

While the “Hot Crazy Matrix” video situates women on a platform of so-called truths — all women are crazy; hot and crazy women are better than not-hot, not-crazy women — Blanchard’s study adds nuance, and heart, to a complex situation.

“Many people have been in a relationship where they have been with somebody who could be regarded ‘crazy’ or even may have themselves though they were the ‘crazy’ one,” she says. “Rather than labeling them or yourself as a bad person, understanding the motivations behind the behavior demystifies the situation and makes it easier to understand.”

“From an evolutionary perspective, we’re all trying to achieve the same thing, which is to pass on our DNA — it’s just that, as people, we go about this in our own individual way.”

Abstract: Men and women reliably differ on the importance of certain criteria when considering romantic relationships. From an evolutionary perspective that explains sex differences in mating effort and parental investment, men should prioritize attractiveness and women, wealth. Personality traits also signal important information about relationship potential with those of the dark triad facilitating short-term relationships. However, how the vulnerable dark triad traits of borderline personality disorder (BPD) and secondary psychopathy function in relationships remains relatively unexplored. Even though interpersonally tempestuous, individuals high in these traits might be alluring in that they offer a thrilling relationship for the short-term, so long as they are also physically appealing. Across two studies, we examined sex differences in partner preference judged on attractiveness in relation to BPD and secondary psychopathy across short- and long-term relationship contexts. Men were willing to engage in relationships with attractive women high in BPD traits, while women compensated low attractiveness for wealth in long-term dating, and did not desire secondary psychopathy in any relationship. Results show that women are more astute in mate preference, avoiding troublesome or financially challenged men who are time and economically costly, and men more readily engage in potentially turbulent relationships.

More like this
Mind and Body
8.15.2022 12:30 PM
Neuroscientists finally figured out why thinking can be so exhausting
By Elana Spivack
Mind and Body
8.7.2022 2:00 PM
Living near one neglected piece of urban eye candy can greatly boost mental health
By Sarah Sloat
Mind and Body
8.3.2022 11:30 AM
The brain’s memory hub may explain why some people get PTSD and others don’t — study
By Miriam Fauzia
Related Tags
Share: