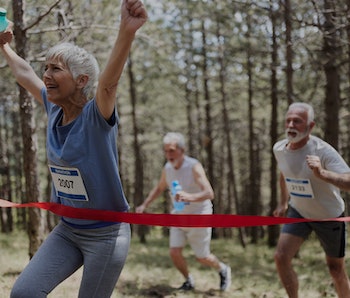 Weekend warriors, breathe easy. A study published this month in the journal JAMA Internal Medicine found that people who exercised only on Saturdays and Sundays — dubbed weekend warriors by exercise scientists — had a lowered risk of mortality that was on par with those who worked out throughout the week.

The 2020 World Health Organization (WHO) guidelines on physical activity suggest 2.5 to 3.5 hours per week of moderate exercise, and one to 2.5 hours per week of vigorous exercise. How the athlete spreads out that time is up to them. A question that has long remained is how completing all your hours in one or two sessions differs from spreading that exercise out over the course of the week.

The new study sought to answer this query, and it brings good news for those with crammed weeks.

Science in action — Researchers from eight countries pulled existing data from the US National Health Interview Survey between 1997 and 2013, analyzing self-reported exercise habits from 350,978 healthy Americans aged 18 to 84. The authors then linked participant records with the National Death Index through the end of 2015 to track mortality. They categorized causes of death into three groups: cardiovascular disease, cancer, and all-cause (any other cause of death).

The researchers assessed physical activity based on how often one engaged in exercise (light-to-moderate or vigorous-intensity) for at least 10 to 20 minutes, and the duration of each exercise session. Heavy sweating, breathing, and an increased heart rate marked vigorous activity.

Why it’s a hack — Just because you’re not hitting the gym every morning before work doesn’t mean you’re not reaping the benefits of exercise. One or two weekend pilates classes and long bike rides absolutely contribute to your longevity.

Though this study concluded regular exercisers and weekend warriors had similarly low risk for mortality, there’s still a push for the former.

“While we continue to believe that regular exercise is the better strategy, the most important message to communicate is that any exercise is better than no exercise at all,” Jeffrey Hsu, a cardiologist at the University of California, Los Angeles Health, writes to Inverse. Hsu was not involved in the research. Additionally, the catch is that weekend warriors might have to work a little harder in their one or two sessions. To get the full benefit, these few sessions may need to be longer and more vigorous.

Hsu also notes that there were fewer weekend warriors than regular exercisers assessed, with about 10,000 of the former compared to about 150,000 of the latter. More rigorous data would come from groups of comparable sizes with more variation.

Hsu cautions that one drawback of this study is that exercise habits were self-reported. That means the data “are often fraught with issues with accuracy,” Hsu writes. The way participants evaluate their habits may differ from how the researchers would. For those interested in distinguishing between moderate and vigorous exercise, the researchers note a wearable device would help.

How it affects longevity — Movement brings plentiful unsung benefits. Exercising for the goal of getting your heart thumping, lowering anxiety, and reminding yourself that you indeed have working muscles is more than enough. Exercise doesn’t have to be a journey or result in a transformation; it can be joyful in itself. The best part is that this joy adds years to our lives, and there are so many ways for every kind of body to move.

Exercise doesn’t always have to be heart-pounding. Hsu endorses the pluses of simply taking a walk. “I absolutely qualify taking a walk as exercise, as walking is ... associated with beneficial health outcomes,” he writes. Even though, according to the WHO’s guidelines, moderate-intensity walking means moving 2.5 to 4 miles per hour, “light, low-intensity walking is better than not exercising at all,” Hsu writes.

So, a good place to start may be reserving an hour on days you aren’t busy to take a walk.

As important as these findings are for those who can move only once or twice a week, Hsu is curious about other details. For example, he’s interested in how the incidence of chronic conditions differs between regular exercisers and weekend warriors.

“It would be important to determine whether more regular exercise conferred a better metabolic profile ... compared to a ‘weekend warrior’ regimen,” Hsu writes.

While the researchers looked at the link between exercise habits and mortality, Hsu is interested in some factors in-between, such as weight fluctuation, diabetes, hypertension, hyperlipidemia, and other conditions that one’s metabolism influences. Since some of these conditions are linked with higher rates of mortality, it’s worth investigating whether weekend warriors’ habits put them at higher risk for these illnesses.

The crucial refrain is that whether you’re a daily exerciser or a weekend warrior, what’s most important is moving your body.