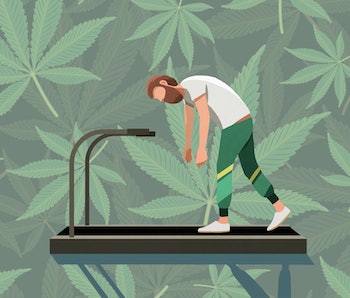 Nobody likes taking tests, but if you smoke weed, there’s nothing worse than a mandatory drug test. The threat of having your urine or hair tested for THC can be enough to have most smokers wondering if there’s a way to quickly get the weed out of your system. Maybe with exercise?

Plenty of stoners and websites may suggest trying to sweat out the THC, but does exercise really work? We asked the experts, and it turns out exercising before a weed test may be the last thing you want to do.

“When the sedentary person decides, ‘I wanna beat this,’ then goes to a sauna or starts doing a bunch of jumping jacks, it won’t really do much,” Rafael Landeiro of Mobile Health, a lab testing service, previously told Inverse.

“Ironically, for the people who are doing that, as your body metabolizes the body fat, [and] you’re releasing more THC than you normally would.”

We’re here to clear up the confusion and explain why exercise may not always be advantageous.

As the cannabis industry booms and legalization gains speed, people may be subjected to fewer marijuana tests. But many settings — especially the workplace, healthcare facilities, and the criminal justice system —may still prefer employees are drug-free.

Typically, a marijuana drug test involves testing a urine sample for metabolites of THC. Other drug tests involve hair, blood, and fingernail samples — methods that can be harder to beat. CBD isn’t likely to raise red flags on a drug test since CBD products typically only include trace amounts of THC. A urine marijuana test will test positive if the THC in the sample is more than 50 nanograms per milliliter.

How long does THC stay in the body?

After using marijuana, THC levels skyrocket in the bloodstream. The compound is fat-soluble, meaning it accumulates in fat stores in the body. The more fat the body contains, the more the body can absorb THC, research shows. As fat is burned through exercise, fasting, or daily activity, accumulated THC releases gradually into the bloodstream, then is excreted as pee.

"It takes about a month for cannabis to get out of the system, which is obviously problematic because there are other drugs that get out of your system quicker but I consider to be more dangerous," Whitney Ogle, a cannabis researcher at Humboldt University, tells Inverse. "So it's unfortunate."

Indeed, studies show THC can linger in the body anywhere from 25 days to three months after marijuana use. The exact timeline depends on factors like the frequency and quantity of marijuana use, amount of body fat, and consistency of exercise can all influence how quickly the body expels the substance. Chronic cannabis users have significant THC levels in their bloodstream days after quitting the drug, previous research shows, while urine can contain THC for weeks after use.

“There is no typical window of detection,” Ryan Vandrey, an associate professor at Johns Hopkins University, told Leafly. “It is highly variable from person to person and it varies based on the frequency of use and the amount of use. So there is no way of predicting or knowing how long someone would test positive with any kind of certainty.”

In an effort to pass a marijuana drug test, people employ some wild tactics. Some swap out their pee for synthetic urine. Others spend hours leading up to the test chugging water and diluting the concentration of THC in their urine. Other people consume detoxifying tea, herbs, or laxatives, or even add chemicals like hydrogen peroxide and bleach to their urine sample.

But these approaches aren't backed by science, and most lab techs see right through the altered samples.

"It's kind of frustrating to be in this world of cannabis where there is so much anecdotal evidence and anecdotal claims out there about what to do," Ogle says. "And there's very little evidence to support any of it."

One popular approach? Up your cardio. But while some studies have tried to parse out whether exercise might interfere with marijuana drug tests, the results have been mixed.

In 2013, a research team explored how exercise impacts THC levels and revealed that cardio may backfire for people trying to get THC out of the body. In their study, they asked 14 regular cannabis-users to exercise at a level that induced fat burning — a 35-minute cycle on a stationary bike. The night before the experiment, the participants abstained from marijuana to prevent high levels of THC in their bloodstream, which could have skewed the results.

After the workout, THC in the participants’ blood spiked — even though blood levels were low before they exercised. High THC levels were seen along with more free fatty acids in the blood, a signal that the workout burned fat. In turn, the researchers concluded that the THC surge was high enough that it would still show up on a drug test.

The study suggests that exercise released dormant THC from fat stores, built up from chronic cannabis use. So instead of “sweating it out,” exercise actually flooded the participant's systems with THC, a move that could complicate roadside or employer drug tests after recent exercise, the authors write.

Importantly, the THC spike went away after two hours, suggesting people should only avoid working out immediately before a drug test if they’re concerned about THC detection. The researchers also didn’t analyze the participant's urine, so how this would impact a typical marijuana urine test isn’t clear.

Meanwhile, in 2014, another group of scientists set out to test the exercise THC connection, by evaluating people’s blood and pee.

They put six regular cannabis users through a 45-minute moderate-intensity workout and a 24-hour fast. The team didn’t see any major differences in THC levels before or after exercise and fasting, in blood or urine levels. They concluded that neither exercise nor fasting is likely to cause significant THC concentration changes that would influence drug test results.

This work has also had some limitations. The study included people with low levels of fat on their bodies. In turn, people with larger fat stores might have seen more significant THC spikes from exercise or fasting. The researchers published their work in the journal Basic and Clinical Pharmacology and Toxicology.

These small studies suggest that exercise probably shouldn’t be your go-to method to pass a drug test tomorrow. But if you're prepping for a drug test weeks down the line, hitting the gym, cutting out fried foods, and burning fat could be helpful.

“Fasting is going to burn fat, which is going to release more cannabinoids,” Vandrey explained. “If you have more fat then there is more tissue for the cannabinoids to get stored in so you might get a little bit longer window of detection.”

Before the THC test, come clean

Ultimately, there isn’t any scientifically-based strategy for passing a marijuana drug test, other than abstinence, Ogle says. Her advice? Get ahead of it. She suggests taking a test at home to see what you're dealing with.

"If you know you’re going to test positive for a test the next day, be honest with your supervisor," Ogle says. "Easier said than done, but it shows a certain level of responsibility."

“It might be that someone had a brownie at a party and that wasn't the intention of what they wanted to do that night, and then they test positive.”

A positive drug test doesn’t mean that someone is a chronic user or that they will be a problem in the workplace, she explains. Every employer could take the news differently, but maybe, coming clean could help avoid any negative outcomes of a failed test.