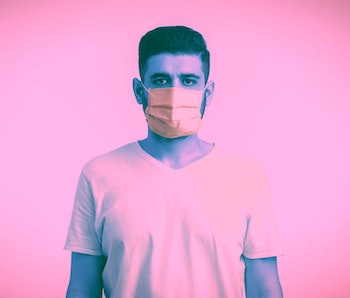 Men and women have similar odds of contracting Covid-19, but men face a higher risk of death. This is true worldwide. Being older than 65 also increases one’s chance of becoming severely ill from the novel coronavirus. Together, these hard realities suggest that age and sex are both risk factors.

A new study suggests these risk factors are primarily driven by the same mechanisms. Ultimately, deaths linked to age and sex are influenced by varying immune responses to SARS-CoV-2, the virus that causes Covid-19.

These responses may depend on two critical elements, the authors suggest:

Lead author Alex Greninger is the assistant director of the University of Washington Clinical Virology Laboratory and an assistant professor of laboratory medicine. He tells Inverse that the study demonstrates the “profound antiviral response” induced when the virus is present at high levels.

This finding, he explains, could lead to the development of better treatments for Covid-19 in the future. It is also an argument for reporting “semi-quantitative viral levels” when testing for the virus.

“We need to figure out a way to induce that immune response earlier in the disease to stop viral replication,” Greninger says. This is currently being studied in the trials evaluating the safety and efficacy of a treatment that includes a combination of antiviral remdesivir and the immunomodulator interferon beta-1a, he adds.

The findings were published Tuesday in PLOS Biology.

What part of the Covid-19 pandemic do you think causes the most confusion? We want to know. Take the Inverse reader survey.

Testing for differences in immune responses — Greninger and his colleagues examined nasopharyngeal swabs collected from 430 individuals infected with the coronavirus and 54 people who were not infected. These are the kind of swabs that enter into the cavity between the nose and mouth.

The swabs, Greninger explains, allowed the scientists to look “right where the virus is replicating to understand the innate immune response to the virus where it matters most.”

The team extracted and sequenced viral RNA from the samples, which helped them build a profile of host genetic responses to Covid-19. They then used the information to compare and contrast responses by infection status, viral load, age, and sex.

Overall, they found immune cell responses weren't activated until three days after infection onset. Viral loads, the total amount of a virus a person has inside of them, also caused immune cell composition and function to fluctuate.

While these factors — viral load and time-course of infection — influence each other, the severe responses seen among men and the elderly were especially driven by the amount of virus present.

The results chime with other studies that suggest the highest levels of individual interferon-responsive genes were seen in samples with the highest viral load. Interferons are proteins that cells make in response to an infection, and scientists have theorized that the timing of the interferon response influences the course of the disease. Too little activation at the start of the illness, or too much activation later, is thought to contribute to severe cases.

In this study, interferon-responsive genes were most often found in the samples belonging to men and older patients. It was “overwhelmingly the viral load that drives this response,” Greninger says.

Men also exhibited increased expression of inhibitors of nuclear factor kappa-B (NF-κB), an ancient protein transcription factor and a regulator of innate immunity. This response is thought to either represent a potentially damaging, outsized response to the virus, or an adaptive mechanism that’s intended to reduce deleterious inflammation.

The team also found 19 genes that could explain the differences in sex response to SARS-CoV-2 infection, although Greninger notes that these genes “were a bit independent of the broad antiviral response.”

Meanwhile, older patients had reduced expression of the Th1 chemokines CXCL9/19/11, their cognate receptor CXCR3, and as well as CD8A and granzyme B. These are all important genes to note because their reduction suggests deficiencies in the function of cytotoxic T-cells and natural killer cells. While neutralizing antibodies are typically used to measure how the immune system reacts to a virus, these cells represent another, critical immune response — one that might be dampened in older individuals.

Age and sex as risk factors — Generally, a person's risk of becoming severely ill from Covid-19 increases as they age. The data bear that out — the CDC reports that 8 out of 10 coronavirus-related deaths in the United States have been among adults aged 65 and older.

In some ways, that response is intuitive: We know that older people are more likely to have the underlying conditions that exacerbate the illness, as well as an aged immune system.

Why men react more severely to Covid-19 than women has been a bit more complicated to tease out. They appear to have roughly twice the risk of death from Covid-19. In August, scientists suggested this may be because men have a less robust T-Cell response to the virus than women. This weakened response may be linked to future worsening of the disease, too.

This new study brings in the factors of time-course of infection and, more importantly, viral load and the genetic elements that drive the viral load to be higher.

Still, other researchers argue that factors beyond biology have to be considered. For example, as of June 2020, 57 percent of deaths caused by Covid-19 in the US have been in men. All states report higher mortality among men on average, save for Massachusetts. But the variation within states also suggests that psychological, behavioral, and social factors may be at play — like willingness to take risks.

Ultimately, further research focused on the biological factors will lead to improved treatments of the sort Greninger envisions. Until then, steps taken to mitigate social elements will be crucial, including social distancing and wearing a mask.

Abstract: Despite limited genomic diversity, severe acute respiratory syndrome coronavirus 2 (SARS-CoV-2) has shown a wide range of clinical manifestations in different patient populations. The mechanisms behind these host differences are still unclear. Here, we examined host response gene expression across infection status, viral load, age, and sex among shotgun RNA sequencing profiles of nasopharyngeal (NP) swabs from 430 individuals with PCR confirmed SARS-CoV-2 and 54 negative controls. SARS-CoV-2 induced a strong antiviral response with up-regulation of antiviral factors such as OAS1-3 and IFIT1-3 and T helper type 1 (Th1) chemokines CXCL9/10/11, as well as a reduction in transcription of ribosomal proteins. SARS-CoV-2 culture in human airway epithelial (HAE) cultures replicated the in vivo antiviral host response 7 days post-infection, with no induction of interferon-stimulated genes after 3 days. Patient-matched longitudinal specimens (mean elapsed time = 6.3 days) demonstrated reduction in interferon-induced transcription, recovery of transcription of ribosomal proteins, and initiation of wound healing and humoral immune responses. Expression of interferon-responsive genes, including ACE2, increased as a function of viral load, while transcripts for B cell-specific proteins and neutrophil chemokines were elevated in patients with lower viral load. Older individuals had reduced expression of the Th1 chemokines CXCL9/10/11 and their cognate receptor CXCR3, as well as CD8A and granzyme B, suggesting deficiencies in trafficking and/or function of cytotoxic T cells and natural killer (NK) cells. Relative to females, males had reduced B cell-specific and NK cell-specific transcripts and an increase in inhibitors of nuclear factor kappa-B (NF-κB) signaling, possibly inappropriately throttling antiviral responses. Collectively, our data demonstrate that host responses to SARS-CoV-2 are dependent on viral load and infection time course, with observed differences due to age and sex that may contribute to disease severity.