"They are more like an organ of our bodies" 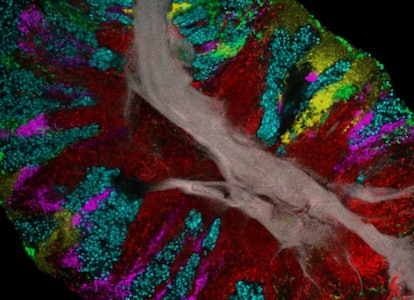 Depending on how you currently feel about the state of your oral hygiene, fluorescent images of all the tiny communities living on the human tongue may either distress or intrigue you. A study published Tuesday provides a stark, fluorescent illustration of just what the microscopic community on your tongue looks like, in so it may be best to prepare yourself to experience a bit of both.

Scientists know that there are already at least 700 different types of bacteria that live inside the human mouth (it's one of the most diverse bacterial communities in the body, second only to the gut microbiome).

What scientists don't know is how those bacteria organize themselves inside our mouths. In turn, a new collection of images taken from the tongues of 21 healthy people reveals that mouth bacteria live very orderly, organized lives – collecting in dense, suburb-like communities on the tongue.

While the team identified 17 genera of bacteria that were present in 80 percent of people in the study, but there were three that appeared in all of the tongues analyzed in the study: Actinomyces (seen in red), Streptococcus (in green) and Rothia (in cyan).

Gary Borisy, the study's lead author, explains that these images — the first of their kind — change the way we look at what is, admittedly, an under-appreciated part of the human physique. The study was published in the journal Cell Reports.

"Bacteria on the tongue are a lot more than just a random pile," Borisy says. "They are more like an organ of our bodies."

Why does the tongue matter?

There are reasons outside of oral health to care about tongue bacteria.

Scientists know that gut microbiome can influence mood, or mental health conditions, like depression. Similarly, the disruption of the oral microbiome may play a role in seemingly unrelated conditions throughout the body, like irritable bowel syndrome, one 2018 review paper suggests.

An even stronger connection has been made between oral health and degenerative brain disease, like Alzheimer's. A June 2019 study in Science Advances found that when mice are infected with the P. gingivalis, a "keystone bacteria" that causes gum disease, their brains began to develop proteins that are usually seen in amyloid plaques — a signature of Alzheimer's.

And the tongue's bacterial life, specifically, has drawn the interest of scientists in the past. Another study, published in January 2019, suggested that conditions like pancreatic cancer are associated with changes in the abundance of certain bacteria in the tongue microbiome. Those authors concluded that tracking the change in tongue microbiota could potentially lead to earlier diagnoses.

Taken together, what goes on in the mouth could be more important than it seems when things go awry, but scientists are still trying to get an idea of what's business as usual on the tongue. These new images give us a better idea of a tongue's typical day.

In this study, the team took a "ridged plastic tongue scraper" and "gently scraped" the tongues of 21 people. The idea was to collect a cross-section of actual epithelial cells (surface level cells from the tongue) and not disrupt the bacteria that were growing on those cells too much.

Taken together, they found 17 different genera of bacteria. Importantly, they noted that these bacteria were organized in layers that begin with bacteria that attach to the actual surface of the tongue itself.

The epithelial cells serve as the "core" (seen in grey in the images). From there bacteria like Actinomyces (red) are the closest to the center. From there Rothia (in blue) forms a second layer. The whole thing is capped off with a Streptococcus (in green) "thin crust" to use the researcher's words.

Knowing which bacteria tend to live next to one another can give scientists a better idea of what a normal tongue microbiome looks like, the study explains. As importantly, knowing what is normal could one day help us understand the consequences of an abnormal one and the health consequences that could be tied to it.

For right now, these bacteria yield some intriguing and slightly gross images that quite literally, illuminate, what's going on inside our mouths.

Abstract: A fundamental question in microbial ecology is how microbes are spatially organized with respect to each other and their host. A test bed for examining this question is the tongue dorsum, which harbors a complex and important microbial community. Here, we use multiplexed fluorescence spectral imaging to investigate the organization of the tongue microbiome at micron to hundred-micron scales.We design oligonucleotide probes for taxa both abundant and prevalent, as determined by sequence analysis. Imaging reveals a highly structured spatial organization of microbial consortia, ranging in linear dimension from tens to hundreds of microns. The consortia appear to develop from a core of epithelial cells, with taxa clustering in domains suggestive of clonal expansion. Quantitative proximity analysis provides the basis for a model of tongue dorsum microbiome organization and dynamics. Our work illustrates how high-resolution analysis of micron-scale organization provides insights into physiological functions and microbiome-host interactions.