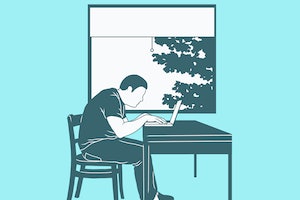 With the newly declared COVID-19 pandemic, it’s important to give yourself time to process what will probably be one of the biggest news events of the decade. (Inverse’s Sunday newsletter, Sunday Scaries, will tackle how to do that, if you’re interested.) But it's also important to focus on cultivating efficiency during these strange days. Though your routine may change, you can still get important things done. Perhaps, you might even find time to be more efficient, despite the perils of working from home.

David Allen is the author of Getting Things Done, a book that has been translated into 30 languages since it was first published in 2001. When I asked him about working from home during COVID-19, he wasn’t fazed — but says many of us lack the structures on which we’ve come to depend, like a normal work schedule that involves going into an office.

Ultimately, a distracted work-from-home day can lead to even more time in front of the computer.

Here’s how Allen thinks his method could help stay-at-home workers stay on track so they can log off on time.

Even when you work from home, your brain is not your office

Allen has generated a lot of conversation. Some have described his movement as a “cult of productivity.” He says his method is largely focused on creating “stability, control, focus, and meaningful space in the head.” It’s not anything particularly secretive or magical.

The idea behind Allen’s method is that, if you’re trying to keep a list of everything that’s going on in your head, you will inevitably fail. Instead, he says, you need to offload the things in your brain and put them onto paper, where you can start to make a plan.

His approach is broad. Everything, he says, falls into the greater category of “stuff” that might be psychological clutter.

“‘Buy cat food’ or ‘buy a company' take up about the same room [in your mind], and either one will wake you up at 3 o'clock in the morning,” he says. “So the main thing is to externalize all that stuff so that then it makes it much clearer what's little and what's big.”

One of the major criticisms of Getting Things Done is that the method is overly complicated — and is replete with flowcharts and jargon. At its heart, it’s just a system for dealing with those things that fly randomly across your mind and add clutter to your mental to-do list.

With that in mind, I asked him to boil it down.

The 5 steps of Getting Things Done

5. Figure out what things are constantly surfacing in your mind.

Allen calls this the capturing phase. It’s where “you notice what's got your attention” instead of letting it pass you by, only to resurface again at 3 a.m.

4. Decide just how much those things actually matter and how long it will take you to do them.

In some cases, you can take care of the things on your list right away — in the same moment that you think of them. Other tasks may not need to be done at all.

For others, you’ll need to lay out a more detailed plan of action, which is where his “externalization” process comes in.

Some people might call this a to-do list. Allen prefers the term “map,” but that’s just because the phrase “map” implies that you can chart a course of action.

“It's a better way to think about it, as opposed to just a list,” he says. “A list is a map if it’s a method that actually helps you, you know, orient yourself in space and time.”

That doesn’t mean you have to create a Pepe Silvia-inspired mind map. It just means that you have to be smarter about including the when, why, and how in your to-do list. As Tim Pychyl, a psychologist at Carleton University, told me previously.

“Specificity lends itself to knowing exactly what you need to do. You can take those next little steps.”

As Allen notes, there are some things you just won’t be able to get to right away. The best course of action for those items is to set a reminder for another time that you can do it.

That allows you to make progress on goals, even if you can’t complete them.

1. Make the time to reflect

Finally, you need to take the time to recognize the things you’ve already accomplished, and figure out what worked and what didn’t.

“If you've captured, clarified, organized, and reflected on all your commitments, then you're going to make much more trusted choices about what you do and what you don't do,” he says.

All of this can get boiled down even more. The key to actually getting things done, says Allen, is simply thinking them all the way through.