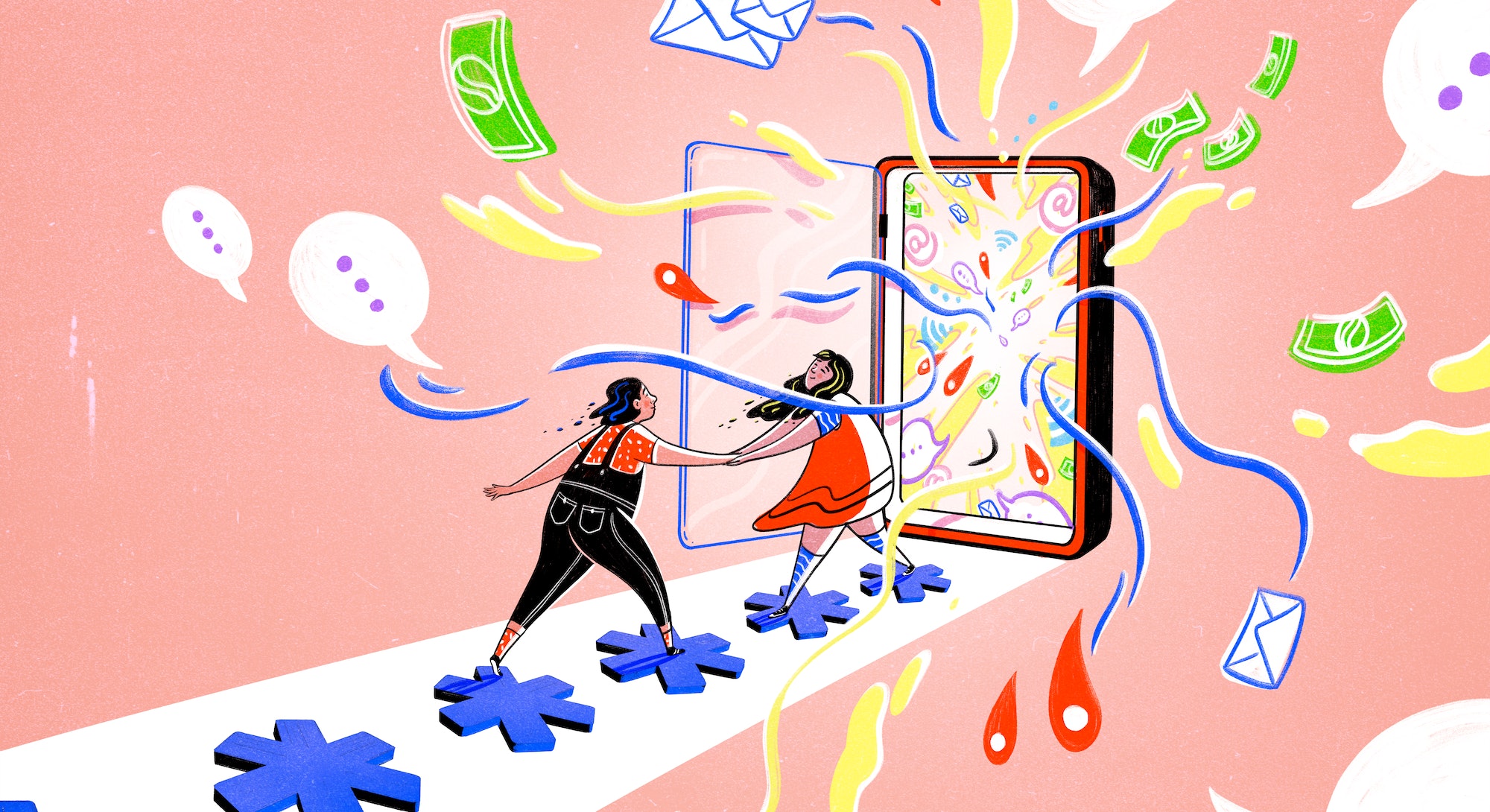 In 2020, letting your partner borrow your phone is far more complicated than just passing over a phone.

Before handing over your personal device, it’s tempting to consider a question that, at its core, reveals how you really feel about your relationship. Do you bypass your phone’s lock screen for your partner, or do you share your password and trust them to open the phone without treading into the more private aspects of your digital footprint?

It’s counterintuitive that a simple gesture like sharing a phone, email, or social media password with a partner requires such heavy emotional calculus, but it’s an issue at the very heart of romance in the age of personal tech.

Phones — and likewise any device linked to technology — might be just another utility in our ever-growing slate of digital conveniences. But they’re also gateways to our personal lives and all the midnight social media swiping and gossip-laden text threads that define them. Once you open the door to your digital life and allow a significant other entry, it may be hard to permanently shut it behind you.

Michelle Drouin, a psychology professor at Purdue University, says password sharing is “a huge, significant step in modern-day relationships,” and one that she’s “not sure many people should take.”

Drouin likens phone password sharing to giving a new partner the key to your apartment — something that more often served as a barometer for relationship trust before everyone had a personal computer in their pocket and a traceable stream of data scattered across the web.

“Unlike a Netflix or Hulu account, where you’re just giving someone access to this outside entertainment entity when you’re giving someone the password to your phone, you’re allowing them complete access to your entire life,” Drouin cautions.

Whether or not to share passwords to phones and online accounts is a question that’s been feverishly googled and debated on Reddit forums. Advice columns have dedicated thousands of words to apprehensive lovers negotiating the big and sometimes relationship-defining question, to which there is seemingly no clear answer.

"You're allowing them complete access to your entire life."

However, though password sharing can spark deliberation, research shows the majority of Americans in committed relationships and marriages are comfortable with some kind of shared digital footprint. A 2014 Pew Research Center survey found that 67 percent of adults in committed relationships or marriages incorporated password sharing with little hesitation. Furthermore, 27 percent of the study’s 2,252 respondents noted that they also shared more personalized and potentially compromising details, such as email account information, with their partners.

Similarly, a 2018 survey of 195 couples conducted by Carnegie Mellon’s Security and Privacy Institute found that 39 percent of those couples shared account information for financial and banking details.

Still, the uniformity of survey respondents doesn’t quite capture the full spectrum of nuance when couples decide if and how to share technology.

Eric Limer has an “asymmetric relationship with my wife” when it comes to sharing devices where he knows her passwords — but she doesn’t know his. Because Limer, a tech journalist, is a self-described “tech monster” who trades in obscure hardware for fun, he says “all of my technology is strange and hard to use for her.” In turn, Limer and his wife “organically developed this situation where I share her devices but she does not share mine.”

Other couples might impose limits on using each others’ tech just for the simple purpose of establishing boundaries.

Scott Simkus and his wife have together for 25 years but “maintain individuality by not sharing passwords.” Simkus, who manages a limousine company in Chicago, says he and his wife Joyce value individual privacy. She treats tech “like her journal,” whereas he treats text threads with buddies as his personal domain.

That’s a perfectly fine situation according to Douin, who views a sense of autonomy as healthy.

And then there's the break-up. Though an ex can leech off a former partner’s Netflix or Hulu account well after a split with few damaging effects, it can get far more invasive when abusive partners gain control of connected home devices, like home assistants and thermostats.

Amy Hasinoff, a communications professor at the University of Colorado, Denver, describes this scenario to Inverse as “the most significant risk of sharing a password with someone.”

Hasinoff points to a 2018 study authored by researchers from Cornell University and City University of New York. This paper documents various instances of digital abuse from ex-partners, including stalking via shared location data or camera-connected home devices, in addition to actions like deleting victims’ address book data.

Regardless of whether or not a breakup happens, if a relationship is abusive (or becomes abusive) and a threatening partner has access to passwords, they “can wreak a lot of havoc on someone’s life,” Hasinoff says.

"We need to have some flexibility in our understanding of people's wants to share."

This kind of cyber abuse is particularly calculated and rare, but can manifest itself in an abusive ex spying on a former partner through their internet-connected television, or when an abuser exerts subtle psychological control by tinkering with a smart thermostat.

This definitely isn’t to discourage prospective lovers from opening up a joint Netflix account, but the truth remains that online security is a precarious aspect of everyday life. People have to consider the ramifications of compromised security if romantic relationships go wrong.

Still, Drouin emphasizes that “one doesn’t need to be instantly suspicious of a partner who doesn’t want to share a password.” There’s no official template for how to negotiate the issue, and the best way for couples to forge through the modern relationship frontier is by simply being honest about their feelings.

“We need to have some flexibility in our understanding of people’s wants to share,” says Drouin, pointing out that people need to “understand that some people are naturally going to be more open and some are going to be more closed.”

And that’s not a bad thing. All couples are different, so finding the successful formula will take conversation, patience, and understanding — pretty much like every other issue in a long-term relationship that’s worth the work.