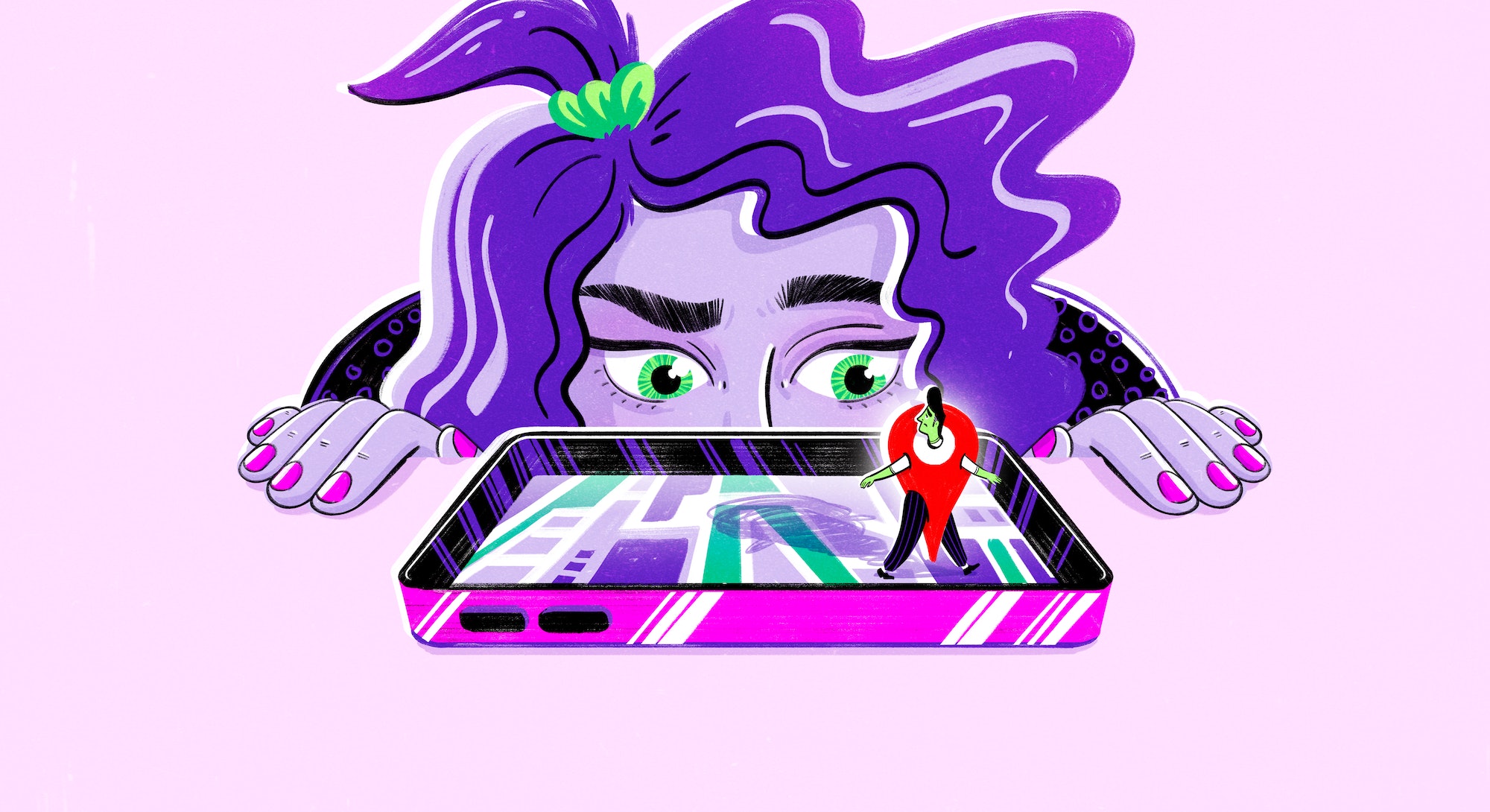 About two years into her relationship, travel writer Marina Nazario broached an idea: that she and her partner start location sharing on their smartphones.

“I do it with my friends, and I was like, ‘Well, my boyfriend is my best friend and I care about him a lot, so we should share our location, too,’” Nazario says. “He was pretty on board with it, after making a joke that I just want to know where he is at all times.”

Nazario figured that location sharing would be helpful while traveling, as they typically split up to do their own thing in unfamiliar cities. “I don’t know if it's the case for him, but I never use it to ‘stalk’ him, for lack of a better word,” she says.

She describes location sharing as a “big step for [a] relationship,” noting that it “amps up the trust factor.” It also offers peace of mind. “I’m not worried about him knowing where I am at all times, rather, I feel kind of secure about knowing he could find me if something were wrong,” she says.

For Nazario and her partner, location sharing is no big deal. Pro-location tracking smartphone users say it’s a simple matter of convenience that facilitates easy communication. Still, critics of location sharing technology say these apps are an invasion of privacy and that using them oversteps reasonable boundaries and brings up questions of trust.

The truth is that there’s no “right” answer. According to experts, the technology is neither inherently good nor bad — when both partners consent to share locations with each other.

An estimated 81 percent of people in the US use smartphones. In turn, app technology has naturally altered the way we conduct our lives, giving us options previously nonexistent. Today, you can split the bill on an app and share your geographic location at all times.

It’s difficult to know how many people use real-time location sharing in 2020 through services like Find My (iOS) and Find My Friends (Android) because Apple doesn’t release information about how many people actively use it. Find My can be used to locate up to 100 friends or family members, and the option comes installed on iPhones using iOS 9 or newer.

Those are not the only options for hopeful location-sharers. Snapchat’s 218 million daily active users can opt to share their location with friends on Snap Map, and the family-oriented Life360 has over 50 million downloads on Android devices alone. Mobile carriers offer specific tracking add-ons like Verizon Smart Family Premium (over 1 million Google Play downloads and 14,700 Apple Store ratings) or Sprint Safe & Found (over 500,000 Google Play downloads and 1,100 Apple Store ratings).

The popularity of these services reflects the modern expectation that we should all be immediately reachable all the time. If someone doesn’t respond to a message immediately, do you have the right to know why? Is wanting to know your partner’s location overstepping boundaries and implying suspicion, or is it simply a matter of convenience and safety?

The answer to that, experts say, depends entirely on your specific partnership.

Dr. Lisa Marie Bobby, a therapist and life coach in Denver, Colorado, says her opinion might be considered controversial. When it comes to generally healthy, secure relationships, location sharing is “absolutely a non-issue.”

“If [couples] do have their location tracking on, it’s not a topic of conversation or something people think too much about,” Bobby tells Inverse.

It boils down to convenience: Location sharing can be useful as far as checking your partner’s ETA or knowing where they are in case an accident happens.

Nicole Young, who works in PR, started sharing locations with her boyfriend of four years when they moved in together six months ago for these types of reasons.

“I’ll check to see how far away he is so I know when to start dinner, or when I need to start getting ready, or just to know when to expect him because I’m excited to have him home,” she says. “Or I’ll text him about something and won’t get a reply, and I’ll take a peek at his location and be like, ‘Oh, he’s at the gym.’”

Location sharing can also help improve the quality of communications between partners.

“For my relationship, location sharing simply helps reduce boring-ass communication with my partner,” writer Beca Grimm wrote in a 2017 piece for GQ. “When you feel a pocket buzz and see your beloved’s name bubble appear, it’s nice to retain hope the message may hold a saucy photo — or at the very least, a sweet note — as opposed to an ETA demand.”

The feel-good effect of that pocket buzz could be explained by research on the similar feeling of getting a text from a partner. In a 2017 study published in Computers in Human Behavior, researchers surveyed 205 young adults about their texting behaviors and relationships. The authors found that the more partners felt they had similar texting practices, as well as “greater perceived similarity in frequency of initiating and saying hello via text messaging specifically,” the more they were likely to be satisfied with their relationship.

Where it can go wrong

Experts are divided over how helpful location sharing really is for relationships. Dr. Jenni Skyler, of the Intimacy Institute in Boulder, Colorado, tells Inverse that if a relationship hasn’t experienced a recent breach of trust, “it’s excessive.”

“It is sort of an exercise over control, and it can take you down a rabbit hole,” Skyler says.

“It is sort of an exercise over control, and it can take you down a rabbit hole.”

If one finds themself in one of the first two situations, Bobby recommends that they stop sharing entirely — both partners need to be comfortable. When it comes to the third situation, she strongly recommends working through the problem with a relationship therapist.

“When trust is damaged, it’s a really big deal,” she explains. “In order to mend that trust, external information is required, because the word of your partner is, by definition, no longer trustworthy.”

“We encourage an unusually high degree of transparency,” Bobby says. “The recovery process includes safety-seeking through information gathering to collaborate what your partner is saying with data.”

How can you know if a partner’s request to share locations is a red flag? “For couples who have never had a breach of trust and one person is demanding [location sharing] — especially if they are demanding it versus requesting it — I think it’s a sign of control issues,” Skyler says.

Another red flag is requesting to track your location in addition to reading your messages or accessing your bank account, says Dr. Michelle Drouin, a developmental psychologist who focuses on technology and relationships.

Ultimately, it comes down to couples

Ultimately, Skyler says, the choice to location share is “so contextual to the relationship” between two people that there are no hard and fast rules. Asking someone to share their location with you isn’t inherently a red flag, and neither is someone’s hesitation to do so.

Drouin cautions partners against feeling like it is a necessary component of building intimacy. Someone having tabs on where you are all the time “isn’t necessarily an essential part of a romantic relationship,” she says.

Going forward, will more couples use location tracking to replace basic communication? Or will the technology slowly fall out of favor as people become more worried about allowing apps access to their personal data and real-time location? For some couples, the sheer convenience of providing an ETA or letting your partner know you had to run out will steer them towards apps with these capabilities. For others, constant location sharing is and will remain just a step too far.

MORE FUTURE LOVE: CAN OFFICE ROMANCES EVER BE ETHICAL? PSYCHOLOGISTS AND DATERS DISH