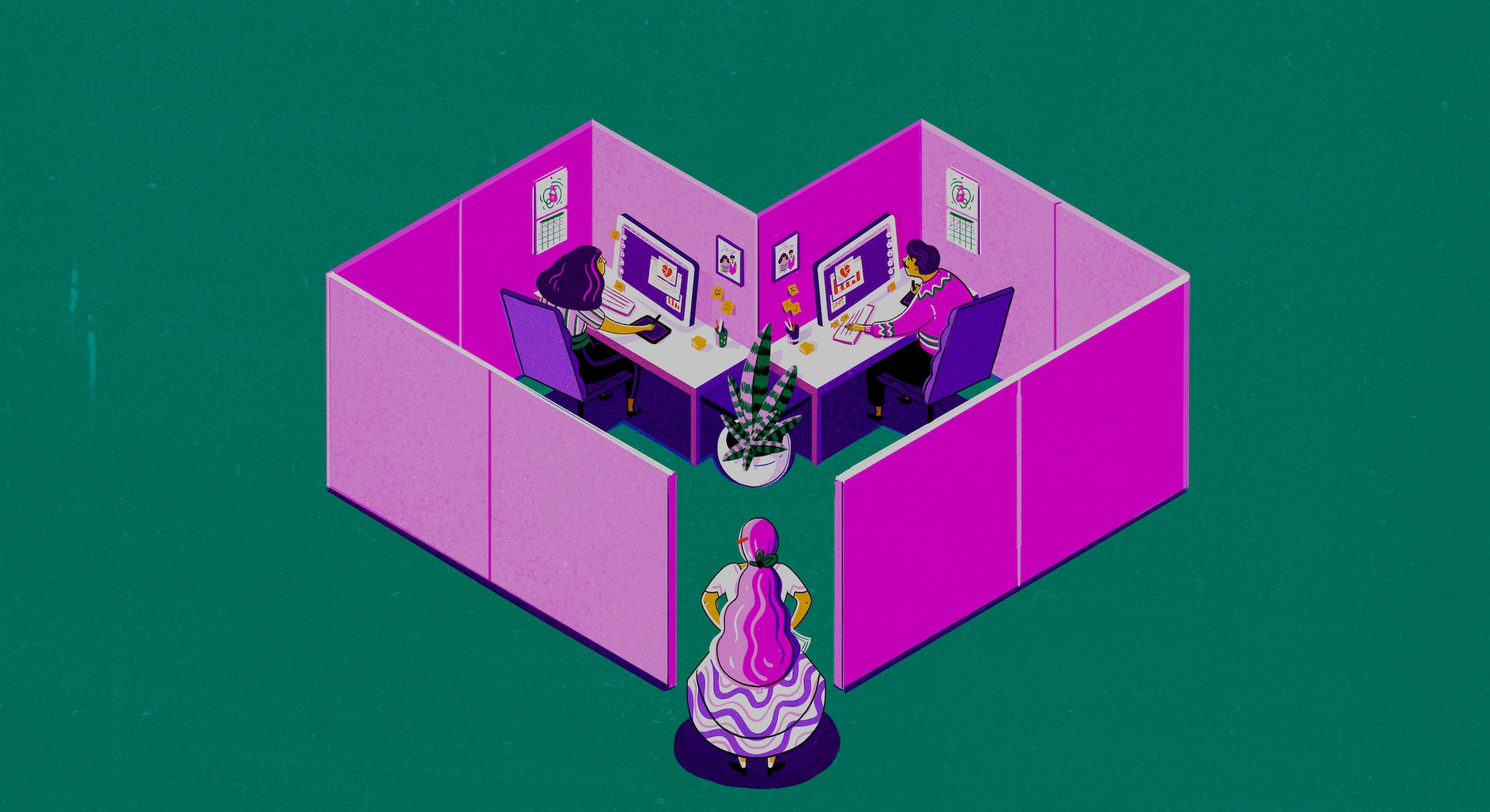 Tonya* and Dario had been quietly dating for a few months when their company’s HR representative saw them kissing at a Christmas party.

As employees in different departments, they’d been pretty successful at keeping their relationship under the radar until then, Tonya says, but at the party, they had all been drinking. After being caught in the act, “work became unpleasant,” Tonya remembers. The HR rep began watching her every movement, following her if she left the room. “She commented on any interaction she witnessed between Dario and me. We sort of went to war over it.”

In the three years since the #MeToo movement made issues of sex, consent, and power part of the national discussion, the “office romance” has become a confusing, and especially controversial, space to navigate. Power imbalances can be exploited, allegations of bias and favoritism can throw an office into turmoil, and it can be just plain awkward when coworkers break up.

Studies indicate office romances are increasingly common, unreported, and risky. Meanwhile, some companies have implemented “anti-fraternization” policies, which prohibit any intra-office dating. But when we spend roughly a third of our lives at work, is a ban on employee romance ethical — let alone realistic?

Dr. Madeleine Fugère, a social psychologist and the author of The Social Psychology of Attraction and Romantic Relationships, says many relationships begin at work simply because “physical proximity and familiarity increase attraction.” Further, “people who choose to work in a particular profession are probably similar to each other in some way, and we know that similarity is also a big factor in liking and attraction.”

According to a 2019 survey of 700 people by Vault.com — a “career intelligence” company that produces frequently cited surveys and career guides — these psycho-social realities may be why 58 percent of respondents had engaged in an office romance at some point in their life. Within this group, 31 percent of relationships started as a “random hookup,” and 22 percent of relationships turned into something serious.

Fugère breaks down office romantic relationships into two categories. The first occurs when a supervisor gets into a relationship with a subordinate. In those cases, there’s an inherent power imbalance. She says, “Whether there’s just the appearance of impropriety — for example, an employee thinking a coworker is getting extra perks because of their relationship with their boss — or a truly improper relationship where someone is looking to abuse their power, [the relationship] can create problems.”

Many workplaces, including Eastern Connecticut State University, where Fugère is employed, have explicit policies prohibiting romantic relationships with superiors and subordinates. If they do happen, she says, people need to carefully think about what they consider most important: the relationship or the job.

Fugère cites the example of her two friends who met while working at the same company. One was the owner, the other was an employee. Ultimately, they decided one person would leave the company.

“I told my friends ‘I'm in trouble’ ... I never wanted to date somebody at work.”

Of course, Fugère says, those relationships can also be fraught, especially if and when the relationship ends.

“Even if it’s not unethical to begin with, it’s very possible that the relationship might not last forever,” she says. “Then you’re going to be working with someone who you’ve just ended a romantic relationship with, and that can be pretty uncomfortable.”

But they can also be pretty hard to avoid. Dave*, who had a two-year relationship with his coworker, said it happened in part because his work life often spilled into his social life.

“The employees were all young and pretty social,” Dave explains. “We went out for drinks after work and hung out on weekends a lot. So in that atmosphere, being in a relationship felt very natural.”

Lucy*, who is now married to the man she met at work, felt like he was the only person in the office she really connected with. “Everyone at the office was pretty preppy, and I’m not. The first day we met, he was wearing a band T-shirt and I thought, ‘Oh, this person is going to be my friend.’”

They continued as friends for about six months, before it escalated into something more.

“I told my friends, ‘I’m in trouble,’” Lucy says. “‘This is not what I wanted; I never wanted to date somebody at work. This is a disaster.’”

When it comes to these cases, it’s helpful to know the office’s policy on dating. In 2018, the Vault survey found that 65 percent of respondents knew what their office’s policy was; in 2019 that number dropped to 59 percent.

Tonya, Lucy, and Dave all worked for relatively small companies and said they either didn’t have a policy on office dating or were never informed of the policy. Lucy says of her company, “It was a small startup. There was no HR; it was sort of the Wild West. All the managers were like 26 or 27.”

She consulted the employee handbook of a company (in the same field) where a friend worked. According to their policy, she was in the clear. “I figured we’re not breaking a normal company’s rules, so we’re probably ok.” Still, she and her now-husband did their best to avoid drawing attention to their relationship. “It was so ridiculous; we would sneak in [to work] in the morning or stagger our arrival time.”

Tonya says she and Dario were caught in a gray area. Their company had an HR representative but no clear policy about employee dating. “When no one knew about the relationship, it was fine,” she says, “but once HR got involved, it became a big thing.”

When HR does get involved, Fugère says, they’ll sometimes ask employees to sign a “love contract,” a document declaring the relationship consensual, thus releasing the company from liability if any allegations of sexual harassment arise during or after the relationship.

Love contracts and HR dictating relationships can feel paternalistic and overbearing. At the same time, companies do have a responsibility to create a safe work environment for all of their employees. Both Lucy and Dave stressed the importance of office culture in creating an environment where relationships of any kind aren’t harmful. Early happy hours or weekend hangouts can lead to a “really blurry environment,” Lucy points out.

Dave adds that healthy workplaces are dependent on more than just HR policies or even blurry social-work lines. He says, “You can do everything to ensure a safe atmosphere, but at the end of the day, it’s going to come down to the caliber and quality of people you employ. If you employ people who don’t respect boundaries and people’s autonomy, or the power dynamics of a workplace, you’re hiring the type of people who harass coworkers.”

”There just needs to be more training about how to deal with situations that are going to arise.”

It’s probably not realistic to expect everyone who has an office romance to inform HR about it or abide by a no fraternization policy. But it is important to have some kind of policy in place (for example, prohibiting superior/subordinate relationships) — and that all employees know what it is. A 2017 study by the Society for Human Resource Management found that only 42 percent of offices even have workplace romance policies. Of the companies that had a policy, 99 percent prohibited relationships between superiors and subordinates.

Meanwhile, when it comes to lateral workplace relationships — like the one Tonya and Dario found themselves in — it might be more effective to focus on anti-harassment policies rather than banning fraternization outright. Facebook and Google, for example, have policies that state employees can only ask a coworker out once, and if the answer is no (or even a vague “I’m busy that night”), the person can’t ask that same coworker again. Anti-harassment policies coupled with anti-harassment training can offer recourse to those who are feeling unsafe or uncomfortable (regardless of if they’re in a relationship with the harasser or not), as well as contribute to a clear and open discussion about what is and isn’t acceptable in the workplace.

Anti-harassment policies might make things easier for HR representatives, too. Given how awkward it can be for everyone involved to disclose a happy, consensual relationship to HR, shifting the focus to anti-harassment allows HR representatives to address what their actual concern is — the safety of their employees and the company.

That shift would have benefited Tonya and Dario — as well as their HR rep. After the couple had left the company (for multiple reasons, including how HR handled their relationship), Tonya learned that the rep may have reacted the way she did because of “a previous allegation” unrelated to the couple.

“I did sort of feel bad for her after that,” Tonya says. “I think HR does have a place in all this. I think there just needs to be more training about how to deal with the situations that are inevitably going to arise.”