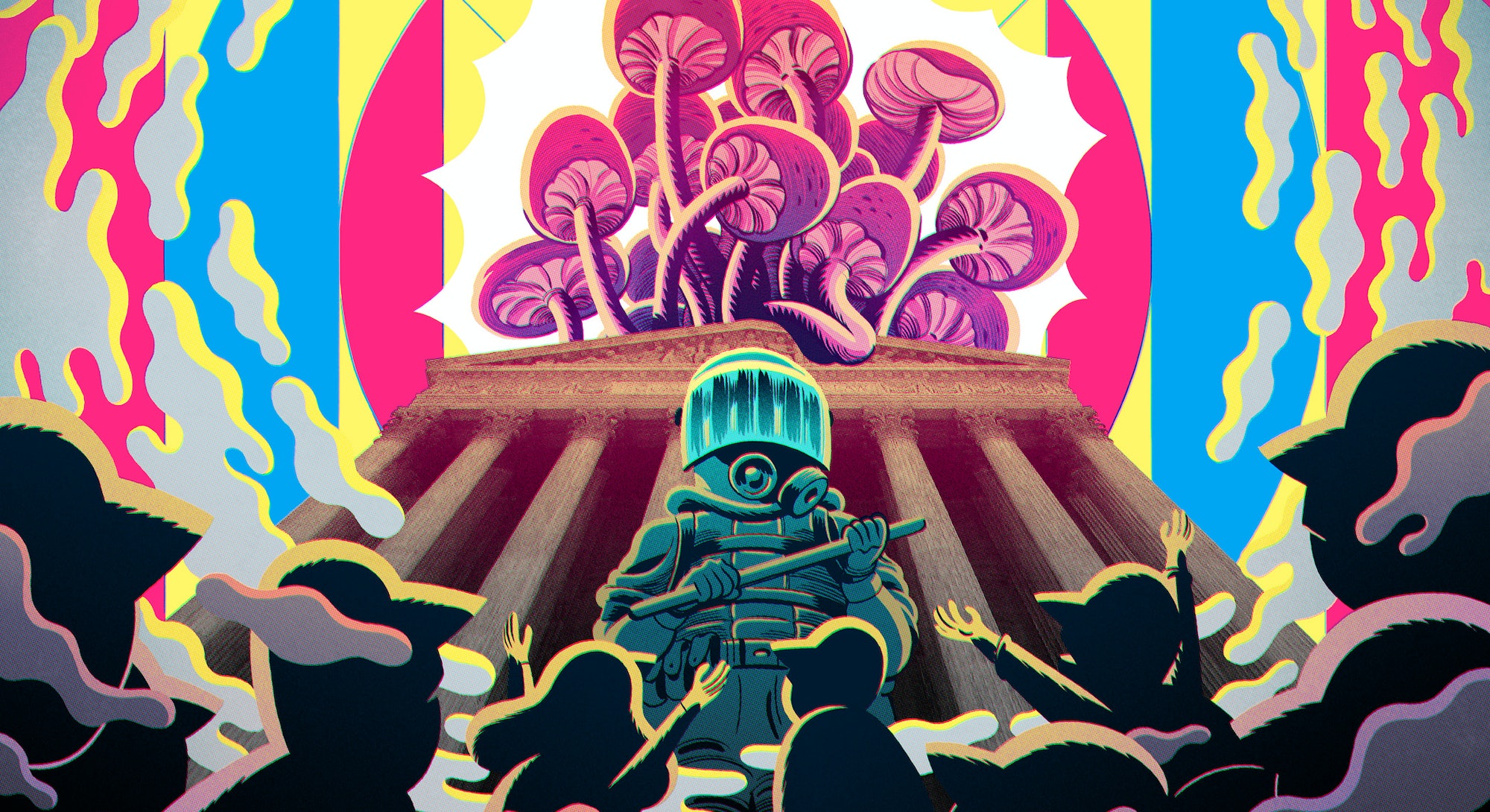 The metastatic breast cancer may eventually kill her, but there may be an experimental remedy to ensure she doesn’t suffer until the end.

The 49-year-old mother-of-two from La Conner, Washington, is not alone in her feelings of despair in the face of a terminal cancer diagnosis. She struggles with depression and anxiety.

She also believes that psilocybin, a chemical compound found in several varieties of wild mushrooms, could help alleviate her anguish over her impending death. She’s willing to take on the federal government to get help.

Baldeschwiler puts it plainly: “This isn’t just, ‘I want to trip.’”

She says she’s looking for a sense of peace as she dies.

In what could prove a landmark case for psychedelics-as-medicine, the date for oral arguments in a lawsuit against the U.S. Drug Enforcement Agency is set for September. Baldeschwiler is among the plaintiffs.

She tells Inverse she hopes the case will be settled before the looming date: “It makes no sense to me whatsoever that public tax dollars, resources, and time are being exhausted on defending the proliferation of pain and suffering for end-of-life patients. None.”

“If psilocybin provides psychological relief during end-of-life care, what is the government worried about?”

“Preventing dying people from trying unproven drugs to alleviate pain is not the role of government,” he adds. “Imposing the will of the government upon them is pure paternalism.”

Psilocybin is a hallucinogenic compound found in so-called “magic mushrooms” that are currently illegal under federal law. But a growing number of studies suggest it is an effective treatment for reducing the anxiety and depression often experienced by people with cancer like Baldeschwiler.

In November 2020, Baldeschwiler’s physician, palliative-care specialist Sunil Aggarwal, and lawyer Kathryn Tucker sought to obtain psilocybin from a supplier under the Right to Try Act, enacted in 2018 by the Trump administration. The law allows people with terminal illnesses to try drugs and medicines that the U.S. Food and Drug Administration has not yet approved. Tucker, it should be noted, serves as co-chair of the Psychedelics Practice Group at the Portland, Oregon-based Emerge Law Group.

Before Baldeschwiler, Aggarwal, and Tucker, no one had tried to access psilocybin under Right to Try in this way.

The first manufacturer they went to declined. But another supplier said it would be willing — with proof of the DEA’s permission. So they asked the DEA, and that’s when things started getting really sticky.

January 2021: Tucker sends a letter to the DEA asking for “guidance on how [the] DEA will accommodate” the Right to Try.

February 2021: The DEA responds that it “has no authority to waive” any of the legal requirements established by the Controlled Substances Act, which criminalized psilocybin and many other psychedelic substances in 1971.

March 2021: The Advanced Integrative Medical Science (AIMS) Institute, represented by Emerge Law and co-directed by Aggarwal, files a petition for review in the United States Court of Appeals for the Ninth Circuit.

May 2021: Aggarwal, Baldeschwiler, another patient, Michal Bloom, and Tucker together file suit against the DEA, alleging the agency’s decision violates the Right to Try law.

September 2021: The first oral argument in their case is scheduled for September 2, 2021.

TBD: A ruling will be issued at some point after the oral argument; that may be as early as the fall of this year.

“[T]he denial serves to fan the flames of my anxiety and depression. The longer this drags on, the greater my stresses become,” Baldeschwiler says. “I need help. I need relief.”

Inverse attempted to reach the DEA for this story, but the agency did not comment.

The government’s most recent response brief, issued in June, states that in the DEA’s February reply to the request for guidance on obtaining psilocybin, the agency suggests Baldeschwiler’s doctor, Aggarwal, should do this:

“[A] potential avenue for Dr. Aggarwal to pursue is to apply for a Schedule I researcher registration with DEA to conduct research with psilocybin.”

In the same February letter, according to the government’s brief, the DEA explains that Aggarwal and co. are not able to apply for exemption from prosecution for obtaining and using a federally controlled substance and that such an exemption “only applies to individuals already registered with DEA to engage in research in controlled substances” and “would therefore not be applicable to Dr. Aggarwal at this time.”

But the DEA noted Aggarwal could “petition the DEA Administrator for a grant of exemption from prosecution” after he obtained a researcher registration.

Aggarwal describes the denial as “red tape” in the “political drug war we inherited,” referring to the War on Drugs, begun in the 1970s by the Nixon administration. The Controlled Substances Act of 1971 is its defining legislative achievement.

“Culture War” — While a former Nixon aide said in an interview in Harper’s in 2016 that Nixon’s drug war was really about vilifying anti-Vietnam War leftists and Black people, those comments, and the commenter, are inarguably more complicated than just that.

However, there’s no denying the landmark law’s political alchemy.

Albert Garcia-Romeu is an assistant professor and researcher of psychiatry and behavioral sciences at Johns Hopkins School of Medicine. He tells Inverse the continued illegality of psychedelics and cannabis stems from a willful misrepresentation of these drugs, calling it a “culture war.”

“This was largely due to political as opposed to scientific motivations,” Garcia-Romeu says.

Psilocybin is, at its most basic level, a psychoactive compound that, when ingested, provokes hallucinations, alters sensory perception, and can leave one with a sense of expanded consciousness, enhanced spirituality, or a new way of thinking.

In terms of the therapeutic application of such a mind-altering substance, there is tantalizing evidence to suggest psilocybin acts like a hard reset of the brain, enabling new neural networks to become established.

It also appears to tamp down the activity in the brain’s fear center, the amygdala. Other research suggests it may influence levels of a neurotransmitter called glutamate, known to be part of what helps us feel calm.

In turn, these effects may mean psilocybin — or drugs that closely mimic its effects — can treat psychiatric conditions like depression or addiction.

Psilocybin may not be an effective or advisable treatment for everyone experiencing anxiety and depression due to illness. The substance can bring up “challenging emotional content,” Aggarwal tells Inverse, and may also trigger psychotic episodes in those who are genetically predisposed to conditions like schizophrenia.

Still, they maintain that the treatment should be available under Right to Try.

“Patients suffering from serious disease should have the ability to experiment with any treatment that offers a chance of survival or improves the quality of their lives, no matter how remote the possibility,” Higgins, the former DEA agent, tells Inverse.

“If psilocybin provides psychological relief during end-of-life care, what is the government worried about?”

It helps people get out of the repetitive pattern of thinking about their fear of dying.

“When we’re thinking about dying, we get into these sort of brain loops,” Rick Doblin, founder and executive director of the Multidisciplinary Association for Psychedelic Studies, or MAPS, tells Inverse.

“People have a hard time getting out of that. And so the psychedelics help.”

They also have the potential to access deeper, “non-ordinary states of consciousness and mystical experiences,” Doblin says.

Essentially, psilocybin helps people get out of the repetitive pattern of thinking about their fear of dying, Doblin says.

Doblin believes the laws against psilocybin are counterproductive and a “fundamental violation of human rights.”

They “should be replaced as soon as possible by some licensed legalization system,” he says.

“The government should weigh the value of easing the suffering of terminally ill patients against the chance they will abuse the drugs,” Higgins says. “Where’s the threat to society in that equation?”

Michael Mithoefer tells Inverse that such a licensing system could be as mundane and systematic as obtaining a driver’s license. (Mithoefer is the senior medical director for Medical Affairs, Training, and Supervision at the MAPS Public Benefit Corporation, the for-profit arm of the psychedelics research agency.)

Just like a driver’s license, Mithoefer asserts that those people who administer the psychedelics would receive extensive training. (Not quite a DMV for mushrooms, though.) Additionally, the license could be revoked.

The people taking the drug would also need to undergo medical screening to evaluate their physical and mental health.

To maximize the benefit from psilocybin treatment, Aggarwal is calling for comprehensive care involving multiple therapy sessions before and after to integrate what was experienced while on psilocybin into one’s daily life.

Mithoefer also stresses the responsibility such treatment requires, adding that those with life-threatening illnesses are especially “vulnerable” and could fall victim to “charlatans” offering a “magic” cure.

“Education is one of the best ways to reduce harm,” he says.

Dave Kopilak drafted Oregon’s Measure 109, which clears the path for the legal manufacturing, sale, and distribution of psilocybin in 2023. He’s a colleague of Kathryn Tucker (the lawyer who has sought to obtain psilocybin from a supplier under the Right to Try Act). Kopilak likens it to a balancing act:

“We have to be smart, and we have to be safe, and we can’t go overboard,” he tells Inverse. “It’s a great balancing act.”

The case could be the one to set the standard for psilocybin as a treatment for anxiety and depression in some cases. The Department of Justice’s brief on the case, submitted in late June, says the drug is governed by the Controlled Substances Act and may be available for research purposes only.

“The Right to Try Act does not exempt anyone from complying with the Controlled Substances Act,” the brief reads, “or even mention controlled substances at all.”

But, as Baldeschwiler suggests, there may be an alternative path — one that avoids the need for a drawn-out court procedure. The clock is counting down, however, and so far, the DEA has not made any overtures of reconciliation to Baldeschwiler’s legal team.

“We have not entered any settlement discussions,” Tucker says. “It is still possible, but who knows. The DEA/DOJ does not like to lose.” That, Tucker says, may motivate the government to try and settle the issue out of court.

For his part, former DEA agent Jeffrey James Higgins hopes the suit pushes far greater action on the part of the government.

“The remedy is for Congress to amend the Right to Try Act to allow terminally ill patients or those suffering from debilitating illness to use Schedule I drugs,” he says. Alternatively, the government could change psilocybin’s schedule based on the research showing it alleviates depression and anxiety.

“Either way, removing legal obstacles for end-of-life care is the moral choice,” he says.

From his point of view as a medical doctor, Aggarwal is “very excited and hopeful” about the upcoming trial.

Baldeschwiler, meanwhile, describes it as more as an attempt at some quality of life.

“Every member [of the legal team involved] cares deeply about helping patients achieve the highest quality and, with hope, quantity of life possible,” she says.

For Baldeschwiler, a safe and caring treatment plan involving psilocybin may be what helps her find peace. For her, now is the time to act — she doesn’t have much of it to spare.

“I don’t have time. I mean, why now? Tick-tock. I’ve got apparently a year left,” she says. “I do not have the luxury of time.”