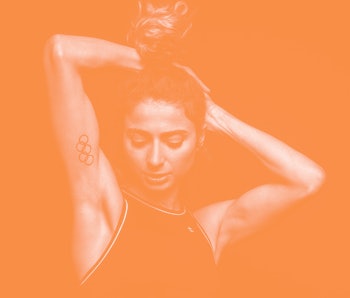 When the International Olympic Committee called off the 2020 Tokyo Olympics in late March, the first postponement in history of the Games not caused by war, Greek-American distance runner Alexi Pappas was shocked. She understood — the world was hammered by the worst public health crisis in a century — but she was still disappointed.

"I think all Olympians completely understand why the Olympics were pushed, though it was still a surprise when it did happen," Pappas tells Inverse. "We athletes are equipped for changes, but this asked for the ultimate adaptation."

Even though her 2020 Olympic dreams were temporarily dashed, Pappas has managed to stay mentally and physically strong throughout the pandemic. Her ability to embrace change teaches everyone, athlete or not, how to cultivate resilience when things don't go as planned.

When the training plan goes up in flames — Pappas entire year was geared toward qualifying and competing for Greece in the 2020 Olympic marathon. Her training was planned down to the hour, mixing speedwork, distance runs, strength training, and race simulations. All that went out the window when the Olympics were postponed.

"Once I learned the news, I immediately shifted my focus from final marathon preparations to focusing on base-building slower runs and also more stability and core-building drills," Pappas says. "Drills are something we runners love to avoid, but the truth is that when you're running at a high level, having core strength and lateral movement durability can mean the difference between health and injury."

From a workout perspective, Pappas is focused on moving dynamically — not just getting faster.

"Truthfully, I am not 'race sharp' right now, which is smart, since we can't stay 'peaked' all the time," Pappas says.

She's incorporated jump roping, ladders, and drills that ask the body to change directions, move sideways, and otherwise change from usual running patterns, training tips she says anyone can benefit from.

One of Pappas' quarantine training sessions in Patras, Greece.

All this slow-burn physical conditioning is designed to prepare her for July 2021, when the Olympics are now optimistically scheduled to begin, Pappas says. Then, the Olympics will feel "even more like the celebration that it [already] is."

Mental conditioning — The pandemic also prompted Pappas to mentally reset, in addition to her physical reboot.

Instead of lamenting her lost chance to compete on the Olympic stage, Pappas, who is also an actress, writer, and filmmaker, harnessed her energy to finish her upcoming book BRAVEY, due to be published January 2021. BRAVEY chronicles Pappas's own journey "befriending pain," competing in the 2016 Rio Olympics, and breaking the women's Greek national 10,000-meter record. Ultimately, it chronicles how Pappas chased and accomplished her dreams.

"I told myself this was an opportunity to grow in new ways," Pappas says — not shrink.

Pappas recognizes that the Olympics postponement is a relatively minor setback compared to the health and economic devastation caused by Covid-19. The pandemic has caused everyone to reset and reboot. While she's dealing with a postponed race, others are dealing with layoffs, sickness, or the toll of social isolation. Some are canceling weddings or visits with family, while others are processing profound loss.

Covid-19 has made us all feel a bit small, helpless, and dejected. To all those adapting to the pandemic, Pappas says: "Find reasons for your later-self to look back on this 'lost time' and feel grateful for it. It is an extremely challenging time, but within boundaries, we can find opportunities and growth."