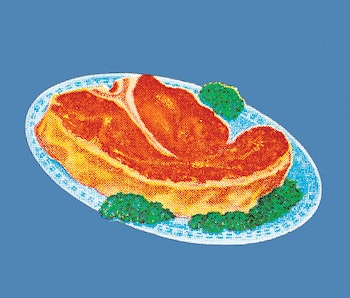 The massively popular ketogenic (keto) diet — often hailed as the fastest way to get lean — increasingly appears to be more of a fad diet and less of a positive, lifelong way of eating. Recently, U.S. News and World Report and their panel of health experts ranked the diet next to last in its annual ranking of overall best diets. As scientists gain a better understanding of how going keto impacts the body and mind, it appears that keto can induce rapid weight-loss — and potentially poor long-term health.

A new study further indicates that the keto diet may threaten health over time. The study, published in the journal Nature Metabolism and conducted in mice, shows that after going keto, some improvements can happen. After going on keto for a week, the mice's metabolism improved and inflammation decreased.

However, after a week on the diet, the positive benefits reversed. After two to three months on keto, the mice became obese, with impaired metabolism and skyrocketed inflammation.

This may read as bad news for keto enthusiasts out there. But the discovery that keto diet is a useful short term intervention, not long term practice, can be seen in a positive light, according to lead author Vishwa Deep Dixit, a researcher at the Yale School of Medicine. As he puts it: "Who wants to be on a diet forever?"

On a keto diet, staple foods like bread and potatoes are replaced with "healthy fats" like nuts, avocado, and butter. The dietary shift tricks the body into breaking down fat and use compounds called ketone bodies as an energy source, instead of carbohydrates and sugar.

In this study, mice were put on a mouse version of the keto diet, which involved eating a type of chow broken down as 89.5 percent fat, 10.4 percent protein, and 0.1 percent carbs. For about two to three months (depending on the mouse) the team monitored the animal's metabolism and immune system and checked to see if any of their genes had experienced a change.

Initial results were positive: One week on the diet lead to an increase of important immune cells, called gamma delta T-cells, which are stored in body tissue. These immune cells help reduce inflammation, improve metabolism, and decrease glucose levels, which can help prevent diabetes.

However, maintaining the diet longer than a week actually depleted these cells, making mice’s glucose levels, inflammation and weight go through the roof.

Interestingly, the researchers didn't see any weight changes during the first week of keto eating.

But, after that first week on the keto diet, the mouse bodies got overloaded with fat. That's because they were unable to burn as much fat as they consumed. It seems that turning on the “ketogenic state” activated starvation mode — the mice could rely on ketone bodies for energy, but they also frantically stored fat.

In turn, the animal's fat stores grew rapidly, eventually causing the mice to be obese, and in some cases, develop diabetes — the exact conditions that the diet initially helped out with.

What does this actually mean for humans?

For now, it's difficult to say. The timeline of when the keto diet might transform from a helpful to harmful metabolic tool isn’t exactly clear.

But Dixit says that, before doctors can start recommending the keto diet to patients, there needs to be large controlled clinical trials that evaluate whether or not it can cause harm to individuals who are overweight or pre-diabetic. Ideally, further research will indicate exactly what prompts any metabolic or immunological benefits, or harms.

From the mice study, it seems like the keto diet might be a helpful tool if someone is looking for these changes to happen fast. But if these positive benefits reverse in humans the way they did in mice, the risks of going keto may outweigh this short-lived boost.

And ultimately, cutting carbs completely can be challenging for people. Other diets — that are more sustainable and less restrictive — may help people achieve the goals they’re after.

More like this
Mind and Body
6.16.2022 6:16 PM
Beer might actually improve gut health, study finds
By Elana Spivack
Mind and Body
6.20.2022 10:00 AM
Is coffee good for you? How to get the most health benefits out of each cup
By Charlotte Mills, Ashley Hookings and The Conversation
Mind and Body
6.26.2022 2:00 PM
Why scientists think these dietary supplements may help treat depression
By Sarah Sloat
Related Tags
Share: