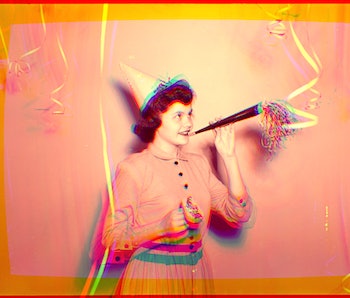 New Year's resolutions are lodged in our collective psyche as a step toward a better year. Annually, our tired habits and routines come into focus, and so do our annual vows. Meditate every morning. Hit the gym. Quit smoking. Stop bickering with your partner.

By February, nearly half of people's resolutions go out the window. Only 19 percent of people keep their resolutions at least two years after making them.

New research reveals how to avoid the typical drop-off and design a New Year's resolution that actually sticks.

According to the largest study on New Year's resolutions to date, people who create resolutions that add behaviors rather than erase them are more likely to maintain them for a year. It's a slight shift that tweaks how you phrase the resolution in the first place — changing "I will quit or avoid" to "I will start to".

The seemingly simple twist can lead to meaningful outcomes, help people achieve their goals, and make behavior changes that last.

It may not be possible to transform your life overnight, but the study suggests habitual, additive commitments to your goals can result in big outcomes.

What's new — New Year's resolutions are wildly popular. Forty-four percent of Americans report being likely or very likely to make a New Year’s resolution for the coming year. But despite their prevalence, scientists don't know much about how well they work, or how to make the process better.

To answer these questions, researchers recruited 1,066 people across Sweden who made resolutions in 2017. Each participant came up with their own resolution. The most popular resolutions were related to physical health, weight loss, and changing eating habits.

The participants were divided into three different groups, which received different levels of support throughout the year: no support at all, some support, and extended support.

In the "no support" group, participants received brief, general information on New Year’s resolutions before reporting their own resolutions and belief in their chances of achieving success.

In the second group, with some support, they did the same but also received information about the positive effects of receiving social support when striving toward a personal goal. They then were asked to name a person responsible for supporting them throughout the year. The participants were also sent exercises and information on how to cope with possible hurdles when striving toward personal goals.

The last, most supported group, received the same information as group two but also received extra information about the value of setting a specific, measurable, achievable, realistic, and time-framed goal — as well as four follow up emails. They were also asked to formulate goals in terms of approaching rather than avoiding something and to set interim goals throughout the year.

Researchers followed up with the participants every month throughout the year-long experiment.

What type of New Year's resolution is best?

The group that received some support was more successful compared to the other groups. However, the varying degrees of support paled in comparison to the effect of the type of resolution and how they phrased it originally. These factors were associated with the highest rate of success.

Fifty-nine percent of participants who set "approach-oriented" New Year's resolution— those that were additive, not eliminating — considered themselves successful in keeping up their goals. These are goals that aim to add a new habit or introduce a new behavior into your life.

Only 47 percent of participants who set avoidance-oriented resolutions considered themselves to be successful.

The Inverse analysis — This study jibes with other psychology research which suggests it's much easier for people to start stuff, than quit it. The minute you place a limitation on a particular action — drinking beer or watching Netflix — the brain can fixate on that "forbidden fruit." By sheer will power, it's extremely difficult to suppress cravings.

Instead, give your brain another tempting alternative and bake cues during the day. If you're trying to stop sweets, stock the fridge with extra fruit. If you want to be less sedentary, try out a new workout class and set reminders on your phone.

As the rollercoaster of 2020 comes to a close, build in some reflection time to not only think about what you want to change, but what you are grateful for. Then, intentionally frame resolutions in a way that sets you up for sustainable success. Your future self will thank you.

Abstract: Despite the popularity of New Year’s resolutions, current knowledge about them is limited. We investigated what resolutions people make when they are free to formulate them, whether different resolutions reach differing success rates, and whether it is possible to increase the likelihood of a resolution’s success by administering information and exercises on effective goal setting. Participants (N = 1066) from the general public were randomized into three groups: active control, some support, and extended support. The most popular resolutions regarded physical health, weight loss, and eating habits. At a one-year follow- up, 55% of responders considered themselves successful in sustaining their resolutions. Participants with approach-oriented goals were significantly more successful than those with avoidance-oriented goals (58.9% vs. 47.1%). The group that received some support was exclusively and significantly more successful compared to the other two. This study reveals that New Year’s resolutions can have lasting effects, even at a one-year follow-up.

More like this
Mind and Body
Feb. 6, 2023
Overthinking? This New Kind of Therapy May Finally Provide An Antidote
By Elana Spivack
Mind and Body
Feb. 5, 2023
Depression Meals: These 4 Easy Dinner Options Are Backed by Science
By Sarah Sloat
Science
Jan. 28, 2023
How does the placebo effect take hold? A doctor explains two influential factors
By Kathryn T. Hall. and The Reader
LEARN SOMETHING NEW EVERY DAY.
Related Tags
Share: