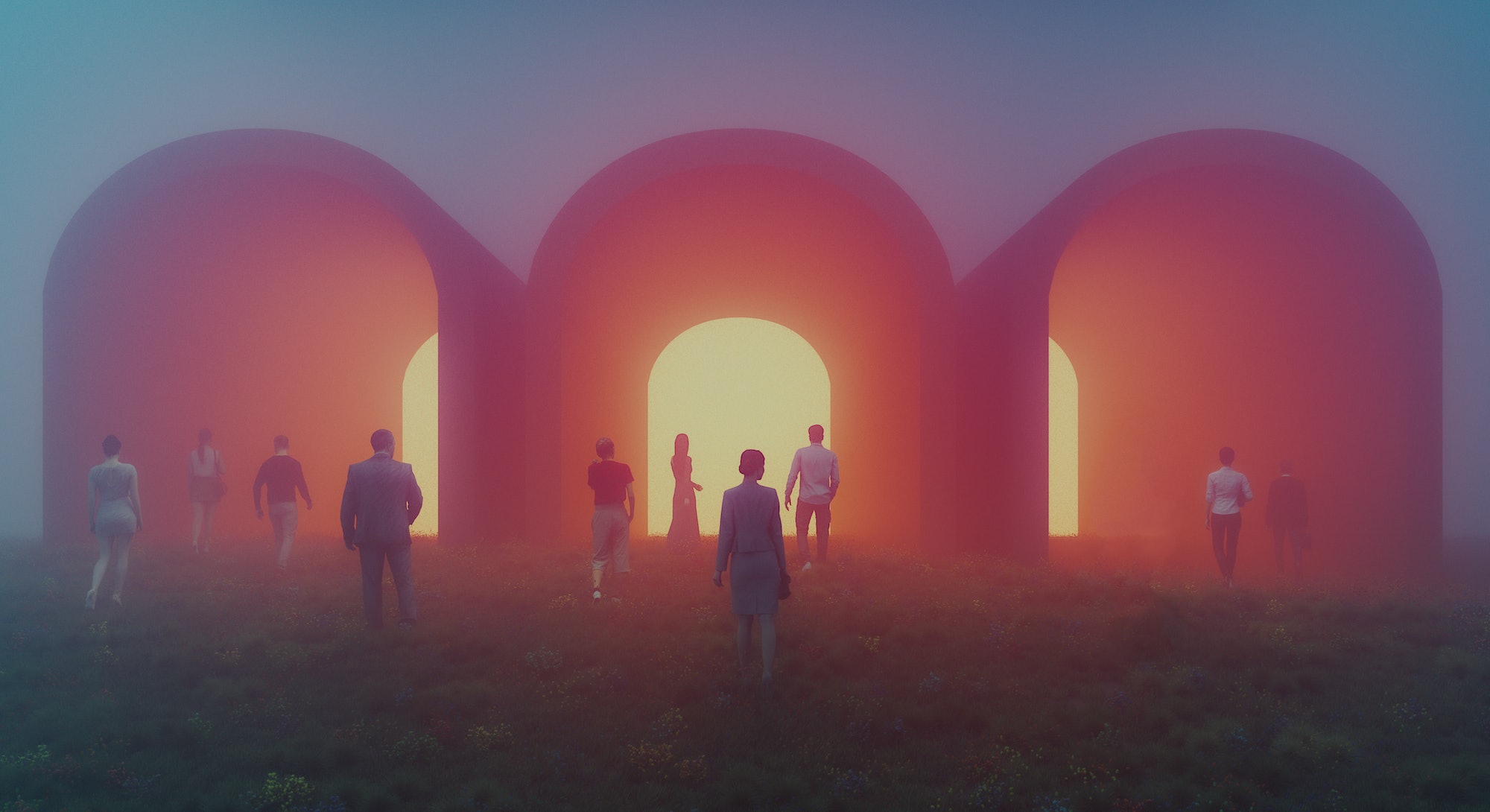 The night after she got her first Covid-19 vaccine shot, Caitlin Papp dreamed she could see into her body.

“I watched the vaccine telling my body how to make antigens on horseback like Paul Revere,” Papp tells Inverse. “Once they relayed the info they would fall down dead on their horse. And my cells were all confused because they had never seen anyone on horseback before.”

Papp doesn’t usually remember her dreams, but this recall serves as a membership card to a growing group. While strange or vivid dreams aren’t a listed side effect of the Pfizer vaccine, the comments section of Open Access Government’s page about Pfizer side effects is full of people who say they had weird, vivid, or terrible dreams following the shot.

“I had a nightmare and I do have them occasionally but this one was pretty bad and my husband said I was screaming and he had to wake me up. He says usually I just moan a little and that’s that. But to me better than getting Covid. I was fine the next day as well. Glad I’m not the only one. It was the Pfizer vaccine.”

Are wild dreams truly a side-effect of Covid-19 vaccines? The answer is no — but also, sort of. Dreams may not be caused by any vaccine, but they are associated with its aftermath.

Chelsie Rohrscheib, a sleep expert and neuroscientist with Tatch Health, has heard “many reports” of people having changes in their sleep. “Common changes [post vaccination] include increased or decreased sleep duration, issues falling asleep or staying asleep, and changes in dreams,” she tells Inverse.

None of these reports are “surprising from a medical and scientific perspective,” she says. To understand why people may have strange or vivid dreams after getting the Covid vaccine, she says, it’s useful to understand why we sleep more when we’re sick.

Why we sleep more when we’re sick

T-cells, a type of white blood cell, are a great example of how sleep increases the strength of our immune responses. T-cells circulate throughout your body, looking for signs (or “targets”) that a cell has been infected with a virus. If it finds a “target,” Rohrscheib says, T-cells activate sticky proteins called integrins that allow the T-cells to attach to the infected cell. Once attached, the T-cell destroys the infected cell and thus, the virus.

How does sleep fit into the equation? “Researchers found that sleep increases the activity of T-cells and makes them better at identifying virus-infected cells,” she says.

“Increased sleep may also be the immune system’s way of increasing antibody production.”

The second reason sleep is so helpful when we’re sick has to do with antibody production.

Antibodies are proteins made by your immune system; they can identify and bind to proteins on foreign pathogens (bacteria, viruses, etc.) called antigens. Similar to T-cells and integrins, when the antibody binds to an antigen it sends a signal to the immune system to attack the pathogen.

This is also one of the reasons you’re so much more likely to get sick when you’re sleep-deprived. If your body is slower or otherwise inhibited from making antibodies, any pathogens that enter your body are going to have an easier time going to town on your cells.

What does sleep have to do with vaccine dreams?

When we get a vaccination, it triggers an immune response. Sometimes that response tricks our body into thinking it’s sick. This is why people get side effects from the vaccine, like fever, aches, and exhaustion. (Fortunately, these symptoms should only last for a day or two, likely much less than what you’d experience when you’re actually sick.)

Meanwhile, “one common side effect of sleeping more, in general, is increased dreaming,” Rohrscheib says. “This is because the amount of REM sleep (the stage where we dream) is increased overall”

If you spike a low-grade fever in response to the vaccine, which is not an uncommon side effect, the likelihood of funky dreams is further increased.

“The increase in body temperature can cause dysregulation of our brain's ability to control sleep, specifically REM sleep,” she says. “When there is a dysregulation in REM sleep we are more likely to experience intense or even stressful dreams. This is where the term ‘fever dream’ comes from.”

Could strange dreams post-injection be psychological?

It’s possible some strange dreams post-vax are driven by a psychological factor, Rohrscheib says, but it’s more likely that at least some physiological elements are at play. When it does, she says, it’s “basically a mental response to a specific stimulus, which could be emotional or behavioral.”

For example, if a person was nervous or stressed about getting the vaccine, or the side effects that might result from the injection, it could affect their sleep.

“Generally, when a person is experiencing acute stress, they will either have difficulties sleeping or sleep too much,” Rohrscheib says. “Both of these scenarios can change the amount of REM sleep you have, and therefore impact dreaming.”

She adds that scientists believe that REM sleep is partially required for emotional processing, which can make us have nightmares when we’re stressed. (Anyone who has had the dreaded ‘I slept through my final’ dream in college is likely experiencing the result of too little sleep and funky emotional processing dreams.)

All of the above factors also contribute to strange dreams when someone has a rare severe allergic reaction to the vaccine.

An allergic reaction to the vaccine is essentially an outsized immune response. Something in the vaccine isn’t agreeing with your body and your immune system is going into overdrive to attack it.

As we know, immune responses can trigger more sleep as well as fevers, both of which can increase the likelihood of strange dreams.

“The one I remember most vividly was one where my eyelids were peeling off.”

Further, any medication taken to inhibit the reaction might have an effect on dreams. Many drugs affect the REM stage of sleep and consequently, your dreams, Rohrscheib says. Studies have shown that Benadryl and other antihistamines can affect sleep in precisely this way.

Stress, medication, and immune response are all possibly responsible for the dreams Audrey Burges, a 42-year-old in Virginia, had after having a rare severe allergic reaction to the Pfizer vaccine. She broke out in itchy hives about 30 minutes after getting back to her house and started chewing children’s Benadryl (the only kind she had in the house).

When she tried to go to sleep that night, “I was so itchy that night that I had a lot of trouble sleeping, but when I did, I had very vivid dreams,” Burges tells Inverse.

“The one I remember most vividly was one where my eyelids were peeling off. It was painless but distressing, like dreams where your teeth fall out — a kind of dread-filled ‘but what will I do without eyelids?’ feeling.”

In retrospect, she thinks the allergic reaction was from propylene glycol, a substance in the Pfizer vaccine that is also in ultrasound jelly. When she was pregnant, it made her skin red and itchy. She called her doctor, who hadn’t seen this particular reaction before, but suggested that, since she wasn’t having trouble breathing and therefore didn’t require emergency attention, Burges add Zyrtec to the Benadryl, which she said “helped a lot.’”

The CDC recommends that anyone who has an allergic reaction to a Covid-19 vaccine not get the second shot, so Burges won’t be going through this again. Despite the reaction, she says, “I want to make clear that I 100 percent would take the shot over again.” Wisely, however, she’s going to follow the guidance of the CDC and her doctor about the second dose.

If you have strange dreams after getting vaccinated, don’t worry. It likely means that your body is doing exactly what it needs to do to protect you from Covid-19, and the dreams — whether they should involve missing eyelids, screaming, or horseback riding antigens — should pass in a few days.