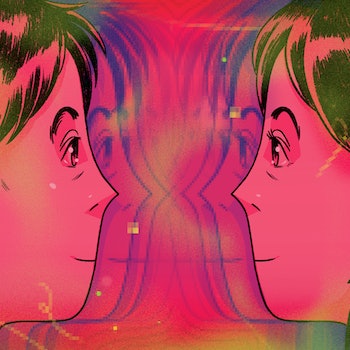 Imagine putting your relationship into online simulated characters and seeing if those characters would end up together again or end up with someone else.

Psychology researchers at the University of California, Santa Barbara are doing just that: uploading personalities and relationship decisions into simulated characters and letting them play those decisions out in a virtual world.

Forty to 50 percent of the time the IRL couples end up as couples in the simulated world. This also means that 40 to 50 percent of the time, couples do not match back up. Exactly why is at the heart of assistant professor Daniel Conroy-Beam’s research. In the future, this information could be used to help people build happier relationships, Conroy-Beam tells Inverse.

Conroy-Beam is head of the Computational Mate Choice Lab at UCSB. His research involves analyzing what decisions and rules people use when choosing a romantic partner. Conroy-Beam has pursued this area of study for the past seven years but was finally able to publish the first of his findings in January 2021.

“... the couples that we predict accurately with these simulations just have happier relationships on every dimension.”

The study includes two experiments in which Conroy-Beam and his team asked all participants and their partners how they would describe their ideal “long-term mate.” These questions probed how intelligent one’s ideal partner would be, how kind, their ideal age, their physical attractiveness, along with questions about religion and sociability.

They were instructed to be honest about what they actually want in a partner. Their romantic partners, in turn, were asked to describe where their person ranked on those dimensions. This allowed the study team to make a report that's an accurate reflection of what that person is really like, Conroy-Beam says.

“And then we can just create little simulated copies that have all of those preferences and all of those tricks for each person,” he explains.

The team found there was about a 50/50 chance a couple would re-match in the simulated world. This is something Conroy-Beam wants to examine further in long-term studies.

But this research does provide some clues. The team also asked the participants about how their relationships were going. How in love are you? How committed?

“What we find is the couples that we predict accurately with these simulations just have happier relationships on every dimension, [compared to] the couples that we’re getting wrong,” Conroy-Beam says. “So not only are we thinking we’re sort of picking up on something about how people do choose their partners, but that gives us some hope that this might be useful in the future — helping recommend people happier relationships.”

Another potential next step is testing whether the simulation could match potential lovers — like a potential dating app.

“Our sort of preliminary plans for the next step after that is to push this even earlier and get people who are single and see: Can we make prospective recommendations?” he explains. “If we have a sample of single people, who would be a good match for you?”

Sara Bartos, a 25-year-old from Volusia County in Florida, says that while she knew her current boyfriend from high school, it wasn’t until they matched on Tinder two years ago when they started to date. Bartos says she could definitely see the appeal for letting a simulation like Conroy-Beam’s do the work.

When Bartos matched with her current boyfriend, she had been using Tinder and other dating apps for a couple of years at that point. She turned them off when she started to date a different boy she met on Tinder, but after they broke up, turned them back on.

“It's fun, but there’s definitely days where you just kind of turn off notifications for it because it's like speed dating with less speed but still so many different people,” Bartos says.

“If I hadn’t met my boyfriend, I might be one of those people that went for something like that.”

However, answering a questionnaire about yourself and letting your simulated self do the groundwork before actually investing in a date could save time and effort, Bartos acknowledges.

“I think so many people would go for that. If I hadn't met my boyfriend, I might be one of those people that went for something like that,” Bartos says.

However, the idea of a simulation dating for you still reminds Bartos of a Black Mirror episode. She doesn’t quite like the idea of an algorithm figuring out your “exact match”. She said she only met with her current boyfriend on Tinder because he was in the area and they previously knew each other, but they had completely different personalities.

“But for me, the differences are what makes our relationship special. So I feel like it could be really, really great for some people, but there might be a lot of missed connections,” Bartos says.

The complexities of these relationships and those missed connections are what Conroy-Beam is looking at in his research. One trend he does see in the simulated couples is the value of reciprocity. This means that everyone has a fixed amount of resources like time and energy.

Time and energy are, in turn, divided among the potential options. Conroy-Beam says that while you may spend attention on someone, they might not spend attention on you — and, eventually, you will find someone else. This point of reciprocity underlies the weeding out process for the simulated couples and eventually is the reason why couples stay together in the simulation.

“It's not just about sort of going for the option that's most appealing to you,” he explains.

“You also have to consider the feedback you're getting from the other person, which a lot of theories in psychology had expressed before but no one had really managed to capture a specific computational model before.”

Conroy-Beam says that while no one has approached him about developing this technology, he wouldn't be surprised about being contacted after more studies are done with long-term data. In the meantime, lovers looking to test the water with a simulation will have to practice with The Sims.

FUTURE LOVE is a series about how advancements in science, technology, and culture are changing love, sex, and dating.