How the brain creates the experience of time — study

"Don't trust your sense of time." 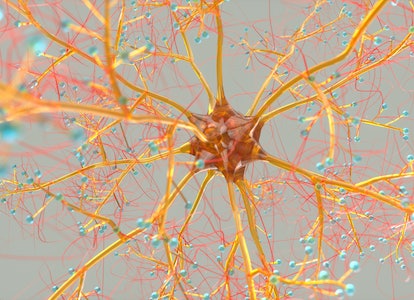 Time, that frustratingly finite resource and ruling construct of our lives, still confuses neuroscientists. What's especially puzzling is why time can seemingly tick by at a glacial pace when you're doing something like waiting in line, but hours appear to rush by in minutes during enjoyable activities, like going to a concert.

In other words: Why does time fly when you're having fun?

In a recent study, researchers became one step closer to answering this perplexing question. By studying people's brain activity during tasks where time is manipulated, scientists found that there are time-sensitive neurons that fire in response to a specific length of time. These time-oriented neurons are located in the supramarginal gyrus (SMG), part of the right parietal cortex, which is also involved with perceiving space and motion.

When exposed to repeated stimuli lasting the same amount of time, these time-sensitive neurons can get worn out. Meanwhile, other neurons continue to operate normally, creating an imbalance that ultimately, skews the perception of time.

Based on these findings, if someone is shown the same five-second video 50 times, for example, they may have trouble estimating a subsequent clip, even if it is much longer or shorter.

These findings were published Monday in the Journal of Neuroscience.

Masamichi Hayashi is the study's co-author. He's a researcher affiliated with the Center for Information and Neural Networks, the National Institute of Information and Communications Technology, Osaka University, and the University of California, Berkeley. Hayashi has long investigated the neural basis of time.

Hayashi stresses to Inverse that this discovery is "only the first step" towards fully understanding the neural mechanisms of subjective time experiences. Still, he says there are some practical takeaways.

He says one message he can give is, "Don't trust your sense of time, especially after you were exposed to stimuli with a constant interval that can lead to neural fatigue of time-sensitive neurons in your brain."

To uncover how the brain creates the experience of time, Hayashi and his team used functional magnetic resonance imaging (fMRI) to measure brain activity as 18 healthy adults engaged in a time comparison task. This technology measures small changes in the blood flow that occur with brain activity.

"While humans have sensory organs designed to perceive lights of vision or pitch of sounds, there is no specific organ for perception of time," Hayashi explains. "That means, our sense of time is probably the product of our brain activity."

In the time comparison task, participants viewed a grey circle on a screen for a set length of time, 30 times in a row. This was considered the adaptation period. Participants then estimated how long it lasted, indicating the "adaptor duration." After this initial adaptation period, the group was shown a test stimulus (either a grey cross on a screen or a sample of white noise) and again estimated time.

How does the brain perceive time?

The more tired neurons appeared to be, the worst people were at estimating time.

"Our finding suggested that time-sensitive neurons in the parietal cortex get fatigued after exposure to a repetitive presentation of a specific time interval and that results in distortion of time perception," Hayashi explains.

Specifically, the results suggest that activity in the right SMG reflects humans' subjective experience of time.

Interestingly, these time-sensitive neurons operate similarly to other neurons that underpin how humans subjectively experience space.

"It has already been known that basic spatial features such as orientation of a bar or its movement is represented by a population of neurons that are sensitive to specific orientation and motion-direction," Hayashi explains.

"Surprisingly, despite the fundamental difference between how we perceive lights and time, we found that time is likely to be encoded by time-sensitive cells, and that activity is associated with how humans perceive time."

One day, researchers may be able to manipulate people's subjective sense of time by stimulating these time-sensitive neurons. Until then, people will have to find other ways to pass the time in waiting rooms and boring work presentations and hope their neurons don't get too tired out.

Abstract: The perception of duration in the subsecond range has been hypothesized to be mediated by the population response of duration-sensitive units, each tuned to a preferred duration. One line of support for this hypothesis comes from neuroimaging studies showing that cortical regions, such as in parietal cortex exhibit duration tuning. It remains unclear if this representation is based on the physical duration of the sensory input or the subjective duration, a question that is important given that our perception of the passage of time is often not veridical, but rather, biased by various contextual factors. Here we used fMRI to examine the neural correlates of subjective time perception in human participants. To manipulate perceived duration while holding physical duration constant, we employed an adaptation method, in which, prior to judging the duration of a test stimulus, the participants were exposed to a train of adapting stimuli of a fixed duration. Behaviorally, this procedure produced a pronounced negative aftereffect: A short adaptor biased participants to judge stimuli as longer and a long adaptor biased participants to judge stimuli as shorter. Duration tuning modulation, manifest as an attenuated BOLD response to stimuli similar in duration to the adaptor, was only observed in the right supramarginal gyrus (SMG) of the parietal lobe and middle occipital gyrus, bilaterally. Across individuals, the magnitude of the behavioral aftereffect was positively correlated with the magnitude of duration tuning modulation in SMG. These results indicate that duration-tuned neural populations in right SMG reflect the subjective experience of time.

More like this
Mind and Body
Jan. 23, 2023
Can spicy food boost our gut health? Here's what the science says
By Katie MacBride
Mind and Body
Jan. 16, 2023
One daily social practice could help stave off dementia
By Elana Spivack
Mind and Body
Jan. 22, 2023
Cyclic breathing: Why experts say just 5 minutes a day can reduce stress
By Sarah Sloat
LEARN SOMETHING NEW EVERY DAY.
Related Tags
Share: