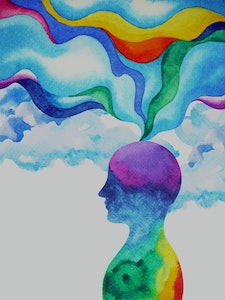 Working from home brings many benefits. There’s no commute, you can eat home-cooked meals, and wear whatever you want. (We won’t tell anyone you’re not wearing pants.) But telework can also be stressful. It's not quite like a snow day from when you were in school. After all, you’re surrounded by distractions, and the line between your home and work life is nonexistent.

Thankfully, there’s a solution that will not only lead you to be less stressed but sharpen your mind, boost your focus, and even help you cut down on mistakes. What is it? Meditation, the practice of being still and focusing on your breath. Best yet, according to research, a little can go a long way. Let’s break down the benefits of meditation, according to science.

Your mind can tend to wander when working anywhere, but especially from home, where entertainment and family members are a room away. A study from the University of Waterloo found that 10 minutes of daily mindful meditation helps keep your mind on track and is particularly effective for people who have repetitive, anxious thoughts.

For the experiment, 82 participants performed a task on a computer. The researchers then presented interruptions to gauge their ability to stay focused. Participants were split into an experiment and control group: The former was asked to engage in a short meditation exercise prior to being reassessed and the latter was given an audio story to listen to.

"Our results indicate that mindfulness training may have protective effects on mind wandering for anxious individuals," said Mengran Xu, a researcher at Waterloo. "We also found that meditation practice appears to help anxious people to shift their attention from their own internal worries to the present-moment external world, which enables better focus on a task at hand."

A key part of meditation is focusing on the breath, and research out of Trinity College Dublin found that breathing directly affects the levels of a natural chemical messenger in the brain called noradrenaline.

According to a release explaining the study, “This chemical messenger is released when we are challenged, curious, exercised, focused or emotionally aroused, and, if produced at the right levels, helps the brain grow new connections, like a brain fertilizer. The way we breathe, in other words, directly affects the chemistry of our brains in a way that can enhance our attention and improve our brain health.”

The participants in the experiment group who focused well while undertaking an attention-demanding task were found by researchers to have greater synchronization between their breathing patterns and their attention than those who had poor focus. This result, they said, means it’s possible to use breath-control practices to stabilize attention and boost brain health.

To err is human, but surely everyone wants to be less error prone. Meditation can help with that, according to a study from Michigan State University. Researchers recruited more than 200 participants, who had never meditated before, and tasked them with a 20-minute open monitoring meditation exercise while their brain activity was measured through electroencephalography (EEG). They then completed a computerized distraction test.

“A certain neural signal occurs about half a second after an error called the error positivity, which is linked to conscious error recognition,” said study co-author Jeff Lin, who noted that meditators didn’t see any immediate performance boost. “We found that the strength of this signal is increased in the meditators relative to controls.”

His co-author, Jason Moser, added, “These findings are a strong demonstration of what just 20 minutes of meditation can do to enhance the brain’s ability to detect and pay attention to mistakes. It makes us feel more confident in what mindfulness meditation might really be capable of for performance and daily functioning right there in the moment.”

Now that you know how meditation can help you to more effectively work from home, check out our list of the best meditation apps of 2020.

A nascent line of research aimed at elucidating the neurocognitive mechanisms of mindfulness has consistently identified a relationship between mindfulness and error monitoring. However, the exact nature of this relationship is unclear, with studies reporting divergent outcomes. The current study sought to clarify the ambiguity by addressing issues related to construct heterogeneity and technical variation in mindfulness training. Specifically, we examined the effects of a brief open monitoring (OM) meditation on neural (error-related negativity (ERN) and error positivity (Pe)) and behavioral indices of error monitoring in one of the largest novice non-meditating samples to date (N = 212). Results revealed that the OM meditation enhanced Pe amplitude relative to active controls but did not modulate the ERN or behavioral performance. Moreover, exploratory analyses yielded no relationships between trait mindfulness and the ERN or Pe across either group. Broadly, our findings suggest that technical variation in scope and object of awareness during mindfulness training may differentially modulate the ERN and Pe. Conceptual and methodological implications pertaining to the operationalization of mindfulness and its training are discussed.