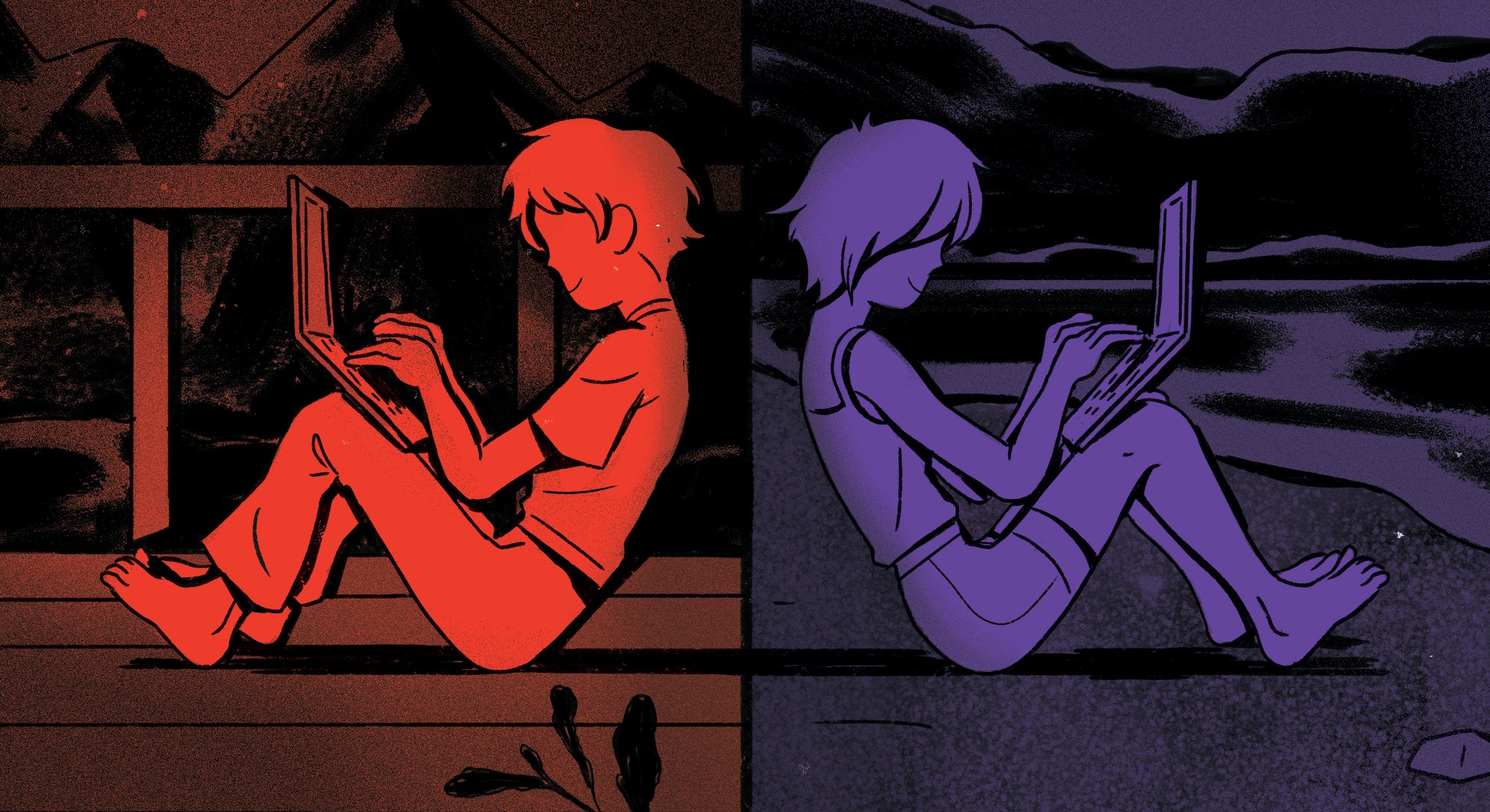 Claudia Canu arrived in Bansko, Bulgaria filled with anticipation. She was about to meet Sebastien Pelletier, the man she had been chatting with on Facebook Messenger for months.

Canu and Pelletier met during a beta test of an online speed dating platform for so-called “digital nomads,” a group of creative class workers who work remotely while traveling. Canu had logged onto the test call from Bali, where she had been for a month. Unlike many digital nomads, she likes to keep a home base — hers was usually Barcelona — but post-Bali she planned to relocate to Bansko, Bulgaria. That was until she met Pelletier.

Pelletier was a true digital nomad who had lived in Thailand, Bali, and select cities across Europe. Pelletier is a co-creator of Nomad Soulmates, the dating platform Canu was helping test. He was taking part to test out the speed dating experience.

Pelletier and Canu hit it off. They friended each other on Facebook after the five-minute call.

“One of the things he told me the first day was that he didn’t want a relationship,” she says. “But that changed.”

Months and many Facebook messages later, Canu met Pelletier in Bansko for a five-day whirlwind. They went out with friends, went for long walks alone, and spent almost every second together. But there was a looming expiration date for their new relationship. Pelletier’s visa was up and he only had a few days left in the country that Canu had decided would be her home.

Canu had a decision to make: Should she follow Pelletier and live again as a digital nomad? Or should she stay behind with only the memory of those five days?

What are digital nomads?

Digital nomads typically reject the idea that community must be built upon growing long-term roots in a place. They’re not interested in having work determine where they can and can’t live either. They often work contract jobs or build their own businesses (digital nomads are coders, life coaches, app developers, you name it) while traveling the world.

“We want to have a partner who is excited about sharing this type of lifestyle.”

The digital nomad life, says Aline Dahmen, a backpacker and co-founder of Nomad Soulmates, is often built around devotion to achieving your “dream life” — a life of travel, freedom, and no nine-to-five obligations. To some, it’s a romantic reframing of digital work. You could spend all day at a WeWork in Brooklyn or you could do the same thing while living out your Bali beach vacation fantasy.

Freedom, though, can come at the expense of intense romantic ties. Many nomads find that they’re lonely on that Bali beach. After all, what’s a dream life without love?

“At some point, we all have this longing to be part of something or a community,” Dahmen says. “We want to have a partner who is excited about sharing this type of lifestyle.”

If technology is the thing that makes the digital nomad lifestyle possible, it’s only natural that location-independent people would use it to fix the lifestyle’s loneliness problem. Dahmen is the founder of one of a small handful of dating apps that are targeted directly at digital nomads and other remote workers.

Dahmen’s mobile app has yet to premiere, but she’s been running a Facebook and web-app version of Nomad Soulmates for several years. Dahmen doesn’t keep statistics on how many couples she’s matched (and how many are still dating), but the group does contain 14,300 members. It was Dahmen who invited Canu to test the beta version of her speed dating platform.

Nomad Soulmates is based on the idea that you can create a deep and meaningful relationship while still prioritizing freedom and exploration.

In some ways, the idea could allow people to rewrite the ending of every wayward travel love story. What if Before Sunrise’s Ethan Hawke and Julie Delpy hadn’t parted ways after the first night in Vienna? What if Gregory Peck and Audrey Hepburn’s Roman Holiday never ended? What if Casablanca’s Ingrid Bergman and Humphrey Bogart had more than just Paris?

Thanks to remote work, real-life digital nomad couples are exploring these “what if” scenarios in real life.

It was that curiosity that drove Canu to pack her bags and follow Pelletier across the border to Serbia. Five days after meeting for the first time, they were living together.

“I thought: ‘Ok, this might be an interesting relationship. So I’m just gonna follow him for a little while, see how it goes,’” she says.

Digital nomads are not indicative of all remote workers. In fact, far from it, says Rachael Woldoff. She’s a professor at the University of West Virginia and the author of Digital Nomads: In Search of Freedom, Community and Meaningful Work in the New Economy, a sociological study of a digital nomad group in Bali. Self-described digital nomads have a different mindset.

“This group thinks of freedom much more broadly in terms of day-to-day ability to control your life and your time,” she tells Inverse.

“They mean freedom to not do a whole bunch of American stuff. Freedom to not buy a house, to not get married, to not go to church, to not celebrate Easter with your mom, to not go to the office, and to leave when you’re done with your work and have more than two weeks of vacation.

They’re kind of rebellious and questioning a lot of things in our society. That is pretty different from how most people in our culture are socialized.”

But digital nomad forums and blogs are also filled with anecdotes about loneliness, as well as stories of meeting a partner in one place and falling in love only to move on when the newfound love interest doesn't want to adopt the digital nomad lifestyle.

“They mean freedom to not do a whole bunch of American stuff.”

Nomad Soulmates’ ad copy for an upcoming mobile app offers its own explanation for why: “Dating apps like Tinder kind of get you by, but nearly everyone you meet is living a different lifestyle than you.” The answer? Date another digital nomad. Perhaps, building love around a mindset or lifestyle is the pathway to long-term love. Maybe that’s what a soulmate really is.

There are certainly some other examples of dating apps and sites that follow this mantra. Jdate and Christian Mingle match people according to religious values. Farmers Only, or Western Match will connect like-minded people with a penchant for country living. There are dating apps for geeks, Harry Potter fans, and gamers. Increasingly, political affiliations are creeping into Hinge bios.

The mindset shared by digital nomads isn’t built upon identifying as Hufflepuffs or Republicans. It’s a mutual desire to be free to pursue the “dream life.”

“It's almost like an adventure partner. It's very romantic,” Woldoff says. “It really is like a soulmate. I mean [Dahmen] really does have that right. It’s someone who loves travel, who loves adventure, who loves nature, who doesn't want to be constrained by their boss, and things like that.”

Still, doesn’t settling down with a person mean compromising once uncompromised freedom? When asked if she worries that a deep relationship might require growing unwanted roots, Dahmen requested time to think over the idea. A few hours later, she replied by email:

“I'd say that a lot of nomads fear that a relationship would take away their freedom. In my opinion, commitments are not a bad thing and also don't take away from your freedom.”

Traveling, even with a nomad soulmate, can be a strain. Dating outside the confines of traditional life means that the relationships themselves can become even more intense.

“In reality, it’s the two of you versus the world.”

Tom* started traveling right after Covid-19 restrictions (in some jurisdictions) started lifting in the summer of 2020. Tom started off traveling with a partner, another person who worked remotely. They forged “amazing memories” with one another. But the relationship also became strained, he tells Inverse.

Every decision they made affected both their lifestyles and businesses. The tension started to build.

“You spend basically all your time together, so sure, you make other friends, but in reality, it’s the two of you versus the world,” Tom says. “Everything is just amplified.”

The experience of traveling with a person, perhaps even a soulmate, can be like putting a relationship through a pressure cooker. Decisions usually encountered once a relationship is “serious” inevitably ensue in just days or weeks. Should you live together? Should you follow them?

Nomads who travel together also have to share intimate details of each other’s lives, like visa statuses and financial realities. Nothing is truly secret. Most digital nomads are also intensely career-minded (they’re into traveling, but they do have businesses to run), Woldoff says — and that’s a lot of pressure to put on a relationship.

Claudia, for her part, acknowledges that digital nomad relationships often become intense very quickly. “On one hand, I think it’s a good thing,” she says. “You know immediately if this is the person for you or not.”

For Tom, though, the strain of traveling became too much. He and his partner broke it off, aware they would soon grow to resent one another. He’s still bruised from the breakup, but he still thinks the digital nomad traveling lifestyle can work with the right person.

“I think ultimately that’s why our relationship ended,” Tom says of his experience traveling with his partner. “We just weren’t the best fit for each other.”

Even digital nomads can’t get around the idea that romance alone isn’t enough. They fight the same battles that location-based couples do, even while pursuing the dream life. Nomads may not have home bases, but their lives still become deeply intertwined.

If Ingrid Bergman and Humphrey Bogart had stayed together in Paris, they might have had money problems. If Katherine Hepburn and Gregory Peck had turned Roman Holiday into a lifestyle, she may have grown to resent the globetrotting reporter.

Still, Nomad Soulmates operates off the idea that there’s someone out there who can make it through the pressure cooker of nomadic love. It’s not an empty promise. After all, Canu and Pelletier did.

Five days after Pelletier and Canu finished their meetup in Bansko, they were living together in Serbia. They stayed there for five weeks. Then, throughout 2018, they traveled to Morocco, Spain, and countless other places, moving about every three months. In 2019, they got married in Gibraltar.

Today, Canu probably wouldn’t call herself a true digital nomad. In 2019, both she and Pelletier settled in Bansko to focus on their businesses before Covid-19 hit. Today, even with travel restrictions easing, Canu is still based in Bansko.

She was ready to grow roots, at least shallow ones, faster than Pelletier. He still feels the urge to travel. Occasionally, he’ll travel alone; right now he’s in Canada with plans to stay for a few months. They chat every day.

“So of course it's difficult because we miss each other,” she says. “But it's ok because we talked about this. It was one of the first things we actually talked about when we first got together — that this is something important.”

Perhaps that’s the true cost of finding a soulmate — a little compromise. But the upside, Dahmen says, is someone who has truly seen the interior of your heart, even if it means fewer passport stamps.

“From my personal experience, I can say that it is the best feeling in the world to have someone on your side who really sees and loves you,” she says. “It has never occurred to me that I was limited or restricted or not independent anymore because of that.”

FUTURE LOVE IS A SERIES ABOUT HOW ADVANCEMENTS IN SCIENCE, TECHNOLOGY, AND CULTURE ARE CHANGING LOVE, SEX, AND DATING.