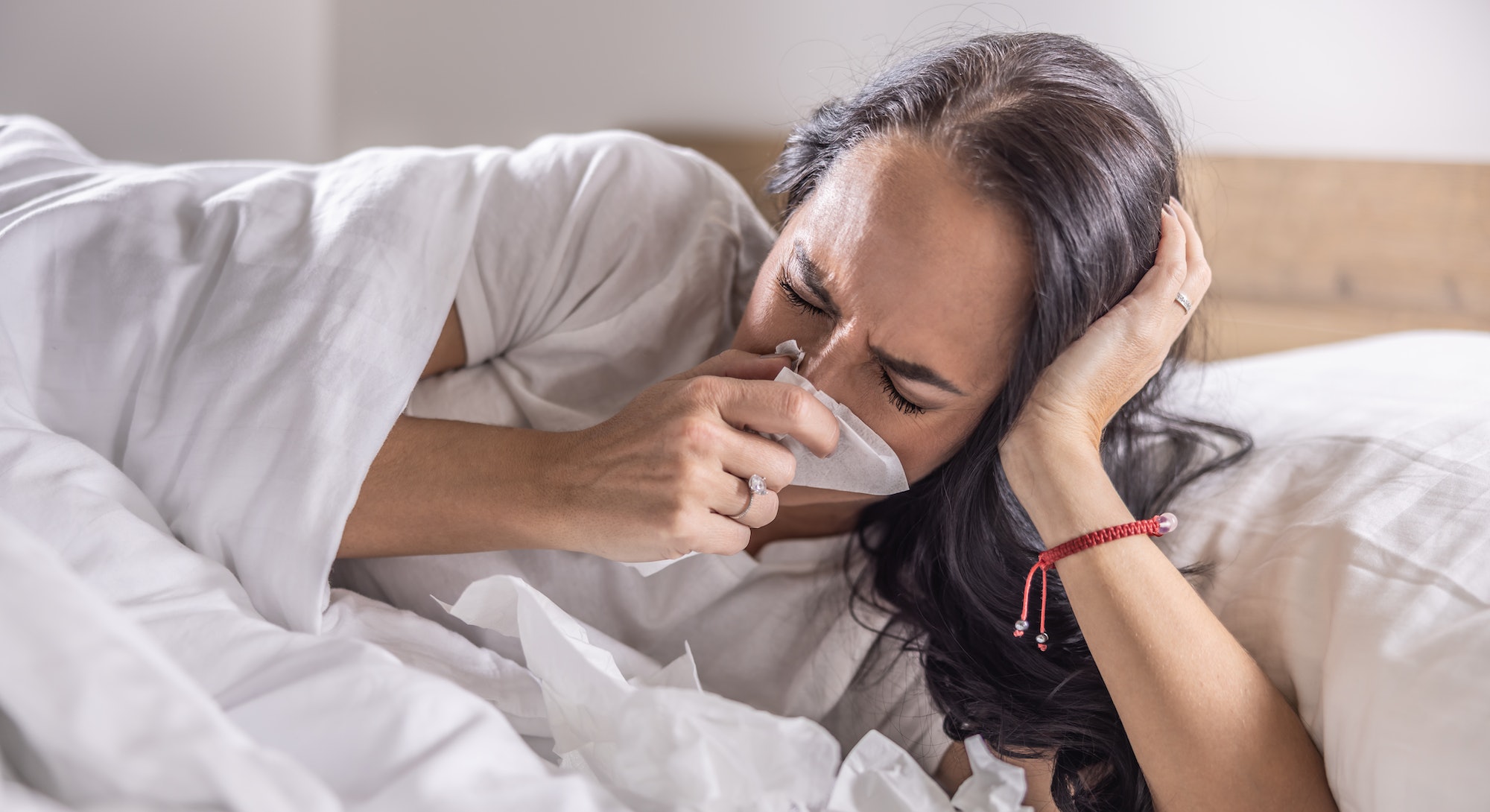 If it feels like everyone around you is getting sick, you aren’t wrong. The number of respiratory viruses currently making the rounds is strikingly high, and it's putting a strain on hospital staff, pharmacies, and even drug suppliers.

But just two years ago, at the height of the Covid-19 pandemic, many people were still living in lockdown, remarking on the fact that they couldn’t remember the last time they were sick. As many of us transition back to normal life, we may find ourselves vulnerable to potential infections or microbes that wouldn’t ordinarily get us down. Doesn’t this mean that our immune systems actually weakened during lockdown?

Inverse spoke to two psychoneuroimmunologists, Anna Marsland of the University of Pittsburgh and Steve Cole of the University of California, Los Angeles, to learn more about the effects lockdown may have had on our immune systems, how we can keep our disease-fighting components in tip-top share, and why our immune systems are strong enough to withstand a two-plus year lockdown.

The thought of isolation may seem equivalent to going to the gym: If you’re inconsistent with your workouts and take one too many rest days (i.e., not getting enough germ exposure), your precious gains are liable to atrophy over time (i.e., your immunity weakens).

This seems to be supported by the “hygiene hypothesis” where being exposed to various germs during childhood builds a better and stronger immune system. But here’s the thing, that’s not how immunity works. As adults, our immune systems have had plenty of exposure to a variety of different viruses and bacteria. When we encounter one, our bodies know how to respond. The frequency of that response, however, doesn’t make our immune system stronger as, say, doing five reps of sumo squats would.

It’s worth noting immunity consists of two arms: The innate immune system, which is broad, non-specific, and primed to respond at the drop of a hat, and the adaptive immune system, which retains a memory of specific pathogens it fought like Covid-19 and takes over only when nudged by the innate.

As the name suggests, the hygiene hypothesis relies on the premise that we and our environments have become too sterile. In reality, it’s very rare for anyone to live in such squeaky clean conditions (unless, of course, you’re a real-life Bubble Boy), especially if you live with pets or other individuals.

Scientists have also come to understand that the hygiene hypothesis has some serious holes in it. For instance, it doesn’t take into account that humans are individual ecosystems coexisting with trillions of microorganisms within and on us — the microbiome. In 2003, microbiologist Graham Rook proposed a more nuanced alternative called the “old friends hypothesis.” Under this theory, it’s believed during early life, we need exposure to symbiotic microbes, whether out in the environment or in contact with others, for our immune systems to develop properly.

How loneliness and stress affect the immune system

Okay, so a couple of years of lockdown has nothing on our immune system’s memory. But what can profoundly influence the immune system is loneliness, stress, and anxiety, feelings many of us most likely experienced during the uncertain times of the pandemic. There are a couple of pathways linking our emotional states to the immune system, says Marsland, the predominant being the autonomic nervous system.

If you harken back to Biology 101, your autonomic nervous system controls involuntary physiological processes like heart rate, breathing, and sexual arousal. Within that, one subprogram called the sympathetic nervous system controls your fight-or-flight response. When this is activated, it sends potent chemicals like cortisol and adrenaline coursing through your blood. Many different types of immune cells have receptors sensitive to these chemicals and respond extraordinarily quickly, which in turn activates inflammation, says Marsland.

Inflammation from short-term stress can be good, though, for fighting off germs. Problems arise when your fight-or-flight response stays on due to stressors always being present or if you constantly feel under attack. (Bad roommate situation, anyone?)

Not only does this contribute to one’s risk for conditions like cardiovascular diseases, but chronic stress also places an individual right in the crosshairs of viral infection through immune proteins called interferon. These proteins are produced by the body when a virus is afoot, letting the immune system know there’s an invader. Chronic stress instead dampens this signaling, says Marsland. It also silences parts of the adaptive immune system, particularly B cells (which make antibodies) and T cells (important for fighting viruses and other pathogens).

Aside from stress, loneliness can also unsettle the immune system, and there was no shortage of feeling that during the pandemic.

Around seven percent of adults surveyed from October 2020 to February 2021 in the U.K. said they felt lonely “often” or “always”, a two percent jump from an earlier survey conducted in spring 2020. In another 2020 survey of approximately 950 American adults, 36 percent responded feeling lonely “frequently” or “almost all the time or all the time.” In both surveys, loneliness seemed prevalent among younger people.

“Social isolation was an enormous stressor for many people, [although] not everyone,” says Marsland. “We used each other as a means of buffering ourselves against stress, [like] if you had a bad day, you go out with friends and talk.”

In the last several decades, scientists have found loneliness’ roots in a myriad of conditions and diseases spanning Alzheimer’s to cancer. Cole of UCLA has spent his entire scientific career parsing out how loneliness leads to poor health outcomes. Together with social neuroscientist John Cacioppo, who pioneered the study of loneliness, they discovered a particular pattern of gene expression called Conserved Transcriptional Response to Adversity (or CTRA) that was triggered by the fight-or-flight response.

Much like stress, activating fight-or-flight is also involved in loneliness. That might seem strange — why be on the alert for danger if no one is around — but what Cole and Cacioppo found was chronic social isolation led to excessive amounts of norepinephrine — a hormone that plays a role in increasing alertness and constricting blood vessels to help stabilize blood pressure during stress — encouraging pro-inflammatory white blood cells, that in a different context would help prevent wound infection, by discouraging anti-viral responses.

“[It looks like] we’re bumping into a situation where, essentially, our bodies have evolved a sort of information pipeline that says when you’re feeling stressed or threatened, fight-or-flight-style, drop your attack on viral pathogens that are chronic scourges and redeploy your immunological resources to inflammation,” says Cole, a throwback to when our early ancestors had to defend themselves against wild animals and needed that sort of protection.

To explore how pandemic-associated loneliness may impact someone’s immune system, Cole and his lab did a study in 2021 where 20 rhesus male monkeys were kept in isolation for about two weeks and then later paired them with a younger monkey. Within two days, the older monkey had an increase in immune cells and chemicals associated with inflammation and a drop in those involved in fighting viruses; this all went back to normal when the monkey returned to their troop. When the older monkey was with the younger monkey, proinflammatory cells were still present in the older monkey, but the genes involved in antiviral activity weren’t turned off.

“So part of the reason we looked at the pro-social caregiving model in monkeys is that we have parallel studies in humans showing that if you experimentally ask human beings to do more pro-social stuff for others, to help others, to take care of the younger generation, we consistently see not huge effects, but pretty reliably you see exactly the same favorable effects we saw in the monkeys that were locked down with a juvenile partner,” says Cole.

If you’re thinking, “Well, I wasn’t lonely per se during the pandemic, I was keeping in touch with friends and family online,” here’s some science for you: While online interactions do confer some immunological benefits, just not at the same level as IRL.

In another 2022 study, Cole and his colleagues looked at CTRA changes among around 140 college undergraduates who were social distancing. They found that those who had more in-person social interactions appeared to have reduced CTRA gene expression, whereas no same benefit was noticed among those who only had online social interactions.

There are also so many other factors that are tied to psychology and mental health, such as getting enough sleep, exercise, and diet — all of which probably took a nosedive during lockdown — that could have impacted our immune systems in the last two years. Both Marsland and Cole say the take-home lesson is that while safeguarding health is important during a global crisis like Covid-19, a narrow-minded focus can make us lose sight of all the trees in the forest.

“During social isolation, could we have been making more recommendations about diet, exercise, [and] the importance of contacting people even if you are physically isolated? We could have helped people in that regard to coping mechanisms,” says Marsland.

“If we can get our [mental health] back together,” says Cole, “we have a chance of reducing the persistent health risks that would otherwise harm us.”