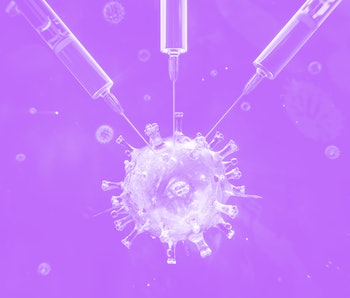 Estimates for a coronavirus vaccine hover around at an estimated 18 months.

For people waiting in quarantine, 18 months may seem like an eternity. But the reality is that scientists are working at breakneck speed to make a vaccine, even if it feels glacial to the rest of us. Five trials currently underway are working at an especially quick pace — it's possible that when we do see a vaccine for Covid-19, it will be because of one of them.

Christopher Fox, the vice president of formulations at the Infectious Disease Research Institute (IDRI) tells Inverse that a traditional vaccine timeline is usually somewhere between 10 and 15 years.

"There is reason to expect that we will move faster than vaccine development has historically moved, but I think when you hear people say a timeline of 18 months, that is assuming everything goes perfectly," Fox explains.

There are already about 76 vaccine candidates confirmed by the World Health Organization as of April 20. More candidates are announced every day, but they all aim to do the same thing. That's to "trick your body" into recognize the coronavirus and destroy it, says Fox.

There are four essential ways scientists try to train the immune system to do that. Each method has different strengths and weaknesses:

Here are 5 candidates that are being tested in humans right now. This list is not exhaustive, but these are in either phase I or phase II out of the three phases needed to make a vaccine.

Who is behind it: – CanSino Biologics Inc is a biotech company based in China. They're collaborating with the Academy of Military Medical Services Institute of Biotechnology (also based in China).

Type of vaccine: – Viral vector vaccine. This vaccine takes a common adenovirus (common viruses that cause cold-like symptoms) and hijacks it to make the coronavirus' spike protein. The adenovirus uses that protein to latch onto cells and infect them. Ultimately, this vaccine attempts to teach the body how to fight that latching off.

The timeline: – CanSino has completed a phase I clinical trial, and is currently recruiting for a phase II clinical trial that will begin “soon,” according to a disclosure released by the company to the Hong Kong Stock Exchange. It's unclear when this vaccine would be complete.

The outlook: – This vaccine candidate is progressing quickly. It moved from a phase I clinical trial to phase II in just three weeks. However, some participants who received a high dose of the vaccine in the phase I trial did subsequently experience high fevers, according to The South China Morning Post. These results were not published in a paper.

However, this vaccine is thought to be a front-runner by experts, because the phase I trial is complete and because they're already moving on their phase II trial.

Update 5/22/20: A paper published in The Lancet suggests that Ad-nCov is safe and can help people produce neutralizing antibodies – the type of antibodies that can protect against coronavirus.

Low, medium, or high doses of the vaccine were given to 108 people. Eighty-three percent of people in the low and medium groups and 75 percent of people in the high groups reported at least one adverse symptom, like pain at the injection site, fatigue, or fever. But after 28 days no serious adverse consequences were reported, and after about 14 days, the authors report that antibodies spiked "significantly."

Who is behind it: – Moderna Inc is a biotechnology firm based in Cambridge, Massachusetts. The company received $438 million from the federal Biomedical Advanced Development Authority (BARDA), part of the U.S. Department of Health and Human Services, to develop a vaccine.

Type of vaccine: – Nucleic acid vaccine, specifically an mRNA vaccine. No vaccine of this type has ever been approved by the FDA. Still, these vaccines can be made very fast.

The timeline: – This company has promised one of the fastest vaccine development timelines.

A phase I clinical trial is underway the Kaiser Permanente Washington Health Research Institute with support from the NIH. It began on March 16. A larger phase I trial involving the same vaccine is also happening at Emory University. Moderna has already applied to move on to a phase II trial slated to begin in the second quarter of 2020, per a company release.

The release also states that a phase III study “could begin” in fall 2020. But since there are no results from the first two phases yet, the timeline is not guaranteed.

The outlook: – Scientists at NIAID and Moderna are able to move quickly because their work is informed by past research on SARS and MERS (per the NIH’s release). They are also preparing to scale up production. The company also signed an agreement with Swiss firm Lonza Group AG to produce 1 billion doses of the vaccine per year.

The US government has made a big bet on this vaccine to deliver on lofty promises, but the company has a spotty track record. They have never developed an FDA-approved vaccine.

The full results of the trial have not yet been published in a peer-reviewed journal.

Who is behind it:– Inovio Pharmaceuticals is a company focused on DNA-based vaccines in Plymouth Meeting, Pennsylvania.

Type of vaccine: – Nucleic acid vaccine. This vaccine gives the body genetic instructions to create extra antibodies that know how to destroy the coronavirus.

Inovio is also working on an accompanying device called the Cellectra 3PSP, which can open pores within cells and help that genetic material slip inside. These devices are necessary to make sure these vaccines are as effective as they can be.

The timeline: – On April 6, Inovio began a phase I clinical trial on 40 volunteers. The results from that trial are expected "by late summer," the company's website reads. Phase II clinical trials are expected by the fall of 2020. Assuming all goes well, the plan is to produce 1 million doses of the vaccine by the end of 2020.

The Outlook: – This vaccine is still progressing quickly, but hasn't committed to as rapid a schedule as Moderna's mRNA-1273. Still, the company is investing in producing it on a mass scale by partnering with Richter-Helm BioLogics. The concern is that working on both a vaccine and a device could slow them down.

ChAdOx1 nCoV-19 or "The Oxford Vaccine"

Who is behind it: – This vaccine is being developed at the Jenner Institute at The University of Oxford. That makes it one of the few vaccines not being investigated by a biopharma company.

The timeline: – This vaccine is already in a large, phase I clinical trial. The team has already given the vaccine to 320 people and aims to have given it to 1,102 people by the end of the first trial, according to the Jenner Institute's website. However, The New York Times reports that the group has plans to test their vaccine on more than 6,000 people by June.

Pending regulatory approval, and positive results, the vaccine could be available by September.

The outlook: – This vaccine has already shown positive results in rhesus macaques, who received a heavy dose of virus followed up with the Oxford vaccine at the Rocky Mountain Institute, an NIH lab in Montana.

The macaques remained healthy after 28 days, according to the New York Times. This research has not been published in a peer-reviewed journal. Human trials are still ongoing, but adenovirus-based vaccines are well-researched and have been trialed as potential Ebola vaccines.

The group is already working on scaling up production and has signed an agreement with AstraZeneca to manufacture the vaccine if it works. If it does come to fruition by September, it will be miles ahead of other candidates.

Who is behind it: – Sinovac Biotech Ltd, is a China-based company, but they've partnered with the Berkeley, California company Dynavax to make a vaccine. Dynavax will provide an adjuvant — an agent intended to make the vaccine elicit a stronger immune response.

Type of vaccine: – An inactive form of SARS-CoV-2. This type of vaccine requires a lot of safety testing, but scientists have been making them for decades.

The timeline: – A clinical trial on this vaccine began in China on April 16, and will enroll 144 participants in the first phase. The plan is to enroll 744 participants in a phase II trial, conducted simultaneously. It's unclear when the company plans to have a vaccine completed.

The outlook: – A non-peer reviewed test of this vaccine in April in macaques suggests that the vaccine could offer "complete protection" from the virus. But results from human trials are awaited.

Inactive vaccines are an old-school approach, which means that we have the infrastructure to make them. These vaccines are also fragile and need to be kept in temperature-controlled storage. Thousands of shots have already been produced, just in case it works.

As long as we don't cut scientific corners, Fox says a vaccine might be coming relatively soon.

"If this much funding and political will was focused on any disease you would expect to see a lot of rapid progress," he says.

Scientists indicate that a vaccine is really the only way to return to normal life. That vaccine could come from any of these projects, from some that haven't even become public yet, or others that haven't progressed to human testing thus far. Wherever the vaccine comes from, it will prove to be a landmark achievement in more ways than one.

Editor's Note: This story has been updated to include the results of human trials of Ad5-nCov and mRNA1273.

This article was originally published on May 2, 2020