Covid-19 could change the way we feel about touch, neuroscientists explain

"I think it loses some of its innocence" 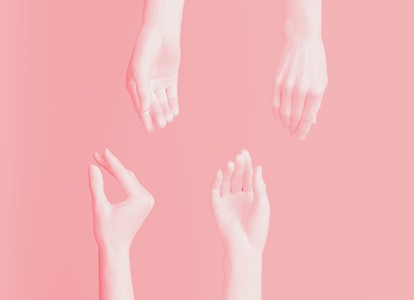 Kathy Alleman didn’t think she could see her grandson without scooping him up in her arms. The desire was so strong, she didn’t trust herself to be around him during the coronavirus pandemic.

“As a maw maw, it’s IMPOSSIBLE not to hug and squeeze him, so it was best not to be physically around him,” Alleman told Inverse over Facebook messenger. So with no end to social distancing in sight, she took the situation into her own hands.

Searching for a solution, Alleman, a Louisiana resident, went to the dollar store and bought the last three shower curtains. At home, she put them on an old clothing rack, and sprayed the contraption with Clorox.

“I taped all 3 curtains together and voila, hug curtain,” says Alleman.

Alleman’s quest to create a hug curtain, a tarp that allows people to hug one another without actually touching, may be ill-advised — experts say shower curtains likely don't offer the level of protection necessary to prevent Covid-19 transmission.

But the fact that it exists, and the good intentions behind it, demonstrates just how much people miss physical touch during the coronavirus pandemic. Creating the hug curtain, Alleman says “came from a desperate place in my heart.”

We live in the most interconnected world in human history. Even with a pandemic, we can still communicate, mourn, or decompress online. Still, online communication can't replace touch, says Jan van Erp, a professor at the University of Twente, in the Netherlands.

Van Erp studies the importance of social touch in communication with robots or “virtual agents.”

“We are starting to realize that the most common platforms — Skype, FaceTime, etcetera — are only good for vision and audition but lack important other social cues like touch,” van Erp tells Inverse.

The science of both touch and emotion is both complicated and “embryonic,” van Erp explains. Touching feels essential, but only in the right context. Covid-19 has already made us miss the simple act of hugging a grandkid. It’s also changing our world enough to throw existing attitudes towards touch off-kilter.

The science of touch — That humans integrate emotion and touch is “a neurobiological fact,” explains Francis McGlone, the head of the Somatosensory and Affective Neuroscience Group at the University of Liverpool.

"What this Covid-19 incident is showing us is that people are missing something in their lives that before they may have taken for granted," McGlone tells Inverse.

While Covid-19 hasn’t robbed us of the ability to feel things like heat or texture, the feeling of a hug feels different from the feeling of being enveloped in a blanket. That happens because there are actually two different neurobiological pathways that your brain has evolved to process touch.

The first kind of touch is called discriminatory touch. It’s the actual sensation of a poke, vibration, or pressure. You register that you’re in contact with something else.

That type of touch is transmitted from your body to your brain through a fast-conducting myelinated nerve (myelinated means that the nerve is coated in fatty insulation). That nerve feeds signals into the somatosensory cortex, where sensory information is processed. Those signals reach your brain quickly in “tens of milliseconds” McGlone says — you feel it immediately.

That kind of touch, he adds, “is boring really.”

The kind of touch people are missing right now is called affective touch. This type of touch “produces a feeling rather than a sensing,” McGlone explains.

McGlone and van Erp explain that this type of touch is conveyed to the brain through a group C nerve fiber, or a “slow nerve fiber.” These nerve fibers are plugged into the brain’s insular cortex, where basic emotions are processed.

C-tactile afferents are a subset of these nerve fibers. They are activated by a gentle caress and in some cases, create a "positive affect". In other words, they make you happy.

Scientists have suggested that these fibers, when lightly stimulated, are a reason prosocial grooming exists in some animals. Importantly, not all slow nerve fibers are associated with pleasure all the time. Other types transmit the sensation of deep-seated pain in the body.

Another grandmother tries out the "hug curtain."

Regardless, all of these slow nerve fibers are unmyelinated, which means that it takes a bit longer for those signals to reach your brain, somewhere around one to two seconds, McGlone estimates. But once those signals arrive, they’re still giving you information that allows you to interpret what that touch means.

And those touches are capable of meaning many different things. One 2006 study found that touch could convey emotions like anger, fear, disgust, love, gratitude, or sympathy. As McGlone puts it a gentle caress doesn’t just convey how you feel — it creates a feeling by causing actual changes in the body.

“This kind of touch releases oxytocin, it impacts on dopamine, which is one of the reward neurotransmitters, it changes heart rate, it reduces stress,” he explains.

“This gentle touch is playing a fundamental role in regulating our well-being.”

That’s the kind of touch that spurs us to drive to the dollar store and construct a hug-curtain out of bathroom supplies. And Alleman isn’t the only person to do this.

Daria and Bobby Lucarelli, both of Ventura County, California wrapped themselves in trash bags just so they could hug their grandkids.

“I just think there are a lot of grandparents that are missing their hugs,” Daria told ABC 7.

Van Erp describes this need for affective touch as “skin hunger,” a phrase that’s usually used to refer to emotional distress seen in children who aren’t caressed by a mother. Now the term is being used more broadly.

“Nowadays, [it’s] referring to all of us,” he says. “Social distancing teaches us the importance of social touch, in nursing, in caregiving, but also simply in our daily lives.”

It seems infeasible that our attitudes towards this type of loving touch could change, but there’s the possibility that they could.

There are two sides to communication using touch, explains van Erp. First, touch can allow you to interpret someone else’s emotions — like if someone person feels happy or sad, based on how they hug you.

Then there’s how touch makes you feel: Someone may touch you trying to communicate joy, but you may not feel that way when they embrace you. Rather, that touch might make you feel uncomfortable or even scared, especially if that touch is not wanted, regardless of whether it’s a gentle caress.

“Experiencing an emotion is much more complex than a single nerve signal and also depends on memory, context, previous experiences, etcetera," van Erp explains. "Exactly the same touch (like a nerve signal) can be experienced very differently."

Previous experiences, context clues, or memories would likely “turn off” that natural pleasant sensations of even a gentle caress, says McGlone, and make it feel uncomfortable.

Overwhelmingly, van Erp and McGlone suggest that touch is context-dependent. Right now our context is a global pandemic in which touching our loved ones needs to be, in many situations, put on hold. Scientists would prefer we don’t actually touch people who don't live in our homes.

Both van Erp and McGlone convey that touch is certainly gaining a prevalence in our lives that it probably didn’t have before the pandemic. In some ways, the pandemic context has led us to appreciate touch more. This is perhaps because we’re skin hungry for the first time in our lives.

It's unclear whether the context might also make us feel uneasy when we touch people. We’ve had millions of years of evolution that have cemented the rewards of close physical contact, says McGlone, so it’s unlikely that coronavirus will cause us to override those instincts entirely.

But our new pandemic world could taint those instincts, and throw us off-kilter. Social distancing encourages us not to touch at-risk people for their own protection. Van Erp says it's definitely possible that some of us might feel uneasy about touching after Covid-19. If watching two strangers embrace in a commercial feels oddly foreign, that’s not totally unexpected.

“People are becoming aware of what they were previously unaware of, and that to some extent, bursts the bubble doesn't it? Once you prescribe [touch] and legislate it, I think it loses some of its innocence.” McGlone says.

If the hug curtain tells us anything, it’s that the desire to hold loved ones is winning out over our changing context. That is, at least for now.

Once the Covid-19 pandemic ends, whenever that happens, the biological machinery that makes touching pleasurable will still be there. Whether or not we will be as eager to touch, remains to be seen.

When Alleman invited her parents and grandson over to use her newly minted hug curtain, they didn’t hesitate. Her hug curtain, she says, allowed them to “breakthrough walls of fear.”

“They were the ultimate BEST hugs of my entire life, just filled with joy, love, happiness, and a huge relief that we will get through this!” Alleman says.