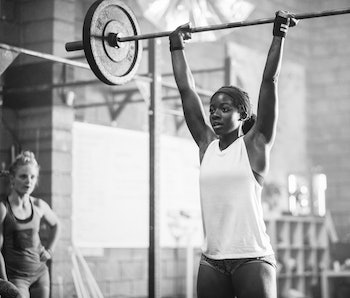 Can a person who isn’t an athlete lift too much?

The question is, in a sense, rhetorical: weights are either light enough to be lifted or heavy enough that they can’t be. In terms of one rep, the answer is no. But lifters can try to lift a weight that’s too heavy, and get halfway there — or, over time, lift a lot more than they’re immediately able to.

So in a technical sense, it’s impossible to lift too much. But over time it’s unavoidable. Most lifters, to grow, have to do so. The rates at which they exceed their abilities are what really matters.

Progress in strength training occurs from adaptation, and muscles grow from being damaged. Muscles get torn at the gym, grow when they recover, and recover when a lifter sleeps and eats well. For a muscle to tear it needs to be placed under stress, which means it needs to be stimulated, under overload, with tension.

Practically, this occurs over time: lifters who want to get stronger and grow need to lift more, in terms of a single lift weight or total poundage in sets, over time. This is referred to as progressive overload.

How much weight do you add to progressive overload?

There are ways to grow without progressive overload, but most programs, whether beginner or advanced, hew to this rough principle of progress. In this sense, all lifters lift too much: strength builds when the weight on the bar goes up. Keeping weight static over time just really doesn’t do much.

Some well-ordered lifting programs can feel like the Copacabana arrangement in Goodfellas — responsibilities, be they paying Paulie or squatting, must get met on a schedule, whether you want to or not. But good programs schedule this overload at a rate lifters can manage, provided their sleep and diet are prioritized. It might feel like too much, but it usually isn’t.

There are several ways for lifters to determine their maximum. One way is through calculating their one-rep max (1RM), also referred to as a PR or personal record. Both specify the maximum weight a lifter can lift once (but not twice). The simplest way to test a 1RM is to load the bar, lift it, add weight, and lift it again until you can’t. (I heard they built bridges that way.)

If lifters don’t feel like testing a single — it can be taxing; some trainers recommend saving a 1RM for competition— they can plug a several-rep max lift that feels like their limit into an online calculator for a pretty good estimate. Lifters should have good ideas of their one-rep maxes, which change over time as strength builds. Knowing your exact 1RM to the pound isn’t necessary if you’re just starting off, but it’s helpful. Most programs base their working weights off this max, locating a sweet spot between exertion and health. Inputting too low a max can turn workouts into deload; too high, and the pace is hard to keep up.

How long does progressive overload take?

Programs take time, and lifters can’t approach every rep in their set like the Calvin and Hobbes bridge: effort needs to be discrete and judged by the lifters themselves.

Lifters can do this by measuring their lifts’ RPE, or rate of perceived exertion, a subjective range that notes, on a 1-to-10 scale, how hard a rep feels to a lifter. It’s simple — you’re measuring yourself — and helpful.

A three-RPE lift is absolutely a warm-up, six means there’s more weight in the tank; if it’s nine RPE, you’re about at your limit. (Your 1RM should be high.)

Tracking RPE helps each lift in a set feel more discrete, and over time gives lifters a more fine-tuned understanding of their body and capacity. When coupled with a workout video, the results can be illuminating. A near-PR squat set might feel like eight RPE to a lifter but can look, to a coach, like a five. That lifter may move faster or more explosively than they think; the weight might feel heavy because it’s new, which affects RPE — a subjective grade. (The inverse, where lifters may be moving worse than they think, can obviously also be true.) Combining subjective and objective feedback allows a lifter to come to a more robust approximation of the truth.

How sore is too sore after lifting?

Effort should be tracked, with RPE, on every lift. Soreness and pain should be monitored, too. These are two different concepts, and being discrete about them allows lifters to stave off injury while pushing themselves as close to the red without going over.

Soreness — sometimes referred to as “good pain” — is inextricable from lifting. It should neither be chased nor avoided: proper diet and recovery help dispel it, but it will come up occasionally, whether on a max- or high-volume attempt, or at the end of a difficult week on a training program.

A lifter might feel their quads screaming during a PR; or feel delayed onset muscle soreness — DOMS — after a brutal squat workout, or a workout that invokes a new muscle group. As long as the soreness is not constant, and doesn’t get in the way of multiple workouts, it can be managed and worked through.

Still, if soreness can be tolerated, bad pain — sharp, shooting sensations, or pain tracked to joints or tendons — should not. Joints and bones should not scream during lifts — if they do, the movement is wrong. They should not hurt outside the gym, either. If, when squatting, your knee is above a 2 on your (subjective) 1 to 10 scale, take the weight off the bar, reevaluate and fix up your form. If your pain sticks around, see a doctor or PT who specializes in lifters.

Can you take a break from a weightlifting program?

The difficulty of individual lifts can be graded by RPE, but measuring the cumulative stress a lifter might feel adjusting to a program is a different proposition. New programs can be difficult adjustments for untrained people. Good programs push weight slowly, and keep lifters working in an acceptable range — perhaps two-thirds of their 1RM, maybe more, to start — with a rep range designed to be followed for weeks at a time.

Still, many lifters can feel exhausted, like they’re lifting too much, even at the start of conservative programs like 5-3-1, especially if they haven’t lifted regularly before.

These situations demand lifters reevaluate since problems at the start of a program — or lifting career — only grow later. Sometimes this means taking a break, but in most cases, the solution is attacking recovery.

Recovery involves eating right: plenty of protein, greens, nutrients, and water. Simply saying eat more is a repetitive exhortation, to be sure, but the science is simple: working out regularly with weights in a range above bodyweight, and at high volume, places serious demands on the body. Recovery, for long-term health, is paramount. It's done mostly through diet and sleep.

Lifters, on a rep or in the middle of the program, may certainly feel like a lift is too much. And it could be. But they might be overreaching — training a bit extra for a short period of time — rather than overtraining.

Overtraining is a difficult concept and something that most non-elite lifters are not in danger of doing. At workaday levels, lifters tend to be more likely to under-recovered than overtrained. (We’re not Olympians here.) Recovering and eating better can neutralize the concept of “too much.”

Of course, not all training conditions are ideal. Lifters might not be able to lift a weight at their max, but they can certainly lift something the wrong way even when the poundage is low.

That creates its own problems. When lifts are done wrong — say, if you don’t brace your core on a squat — the wrong body parts do the work, movements break down, and injuries mount. And while the form isn’t everything, and injuries are part of lifting, going out of commission because of a phoned-in squat feels like a waste of a month. Responsible weight training is set up to minimize these injuries: coaches and trainers prioritize form for this reason specifically.

Ultimately, when we strength train, we lift more weight than we have, and sometimes more than we can. We do this as often as we can, and as heavy as we can, without pushing ourselves into the red. Sometimes the needle goes into the red, but it shouldn’t live there for most lifters. Lifting heavy and regular can feel like a lot, but programmed correctly, and with the right recovery, weight rises slowly, with just enough of a strain that it’s felt. Lifters, trained to judge their effort and pain for themselves, can make the call to continue. If they don’t want to lift too much, they don’t have to. But if they don’t try, they won’t get anywhere.