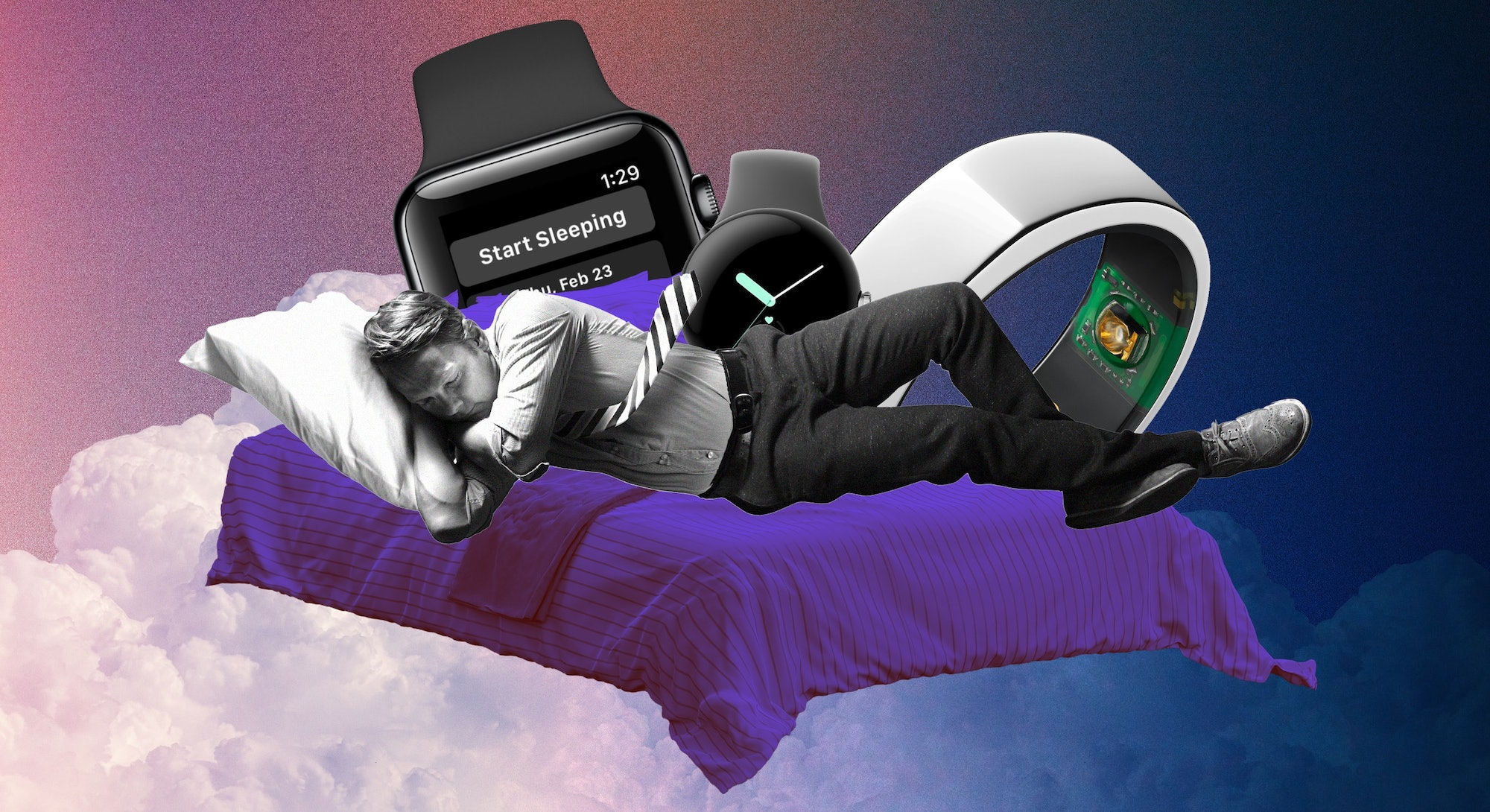 In December 1963, 17-year-old Randy Gardner embarked on an ambitious science fair project: to stay awake for as long as humanly possible.

This wasn’t the first time someone had placed this cruel task upon themself. In 1959, New York City disc jockey Peter Tripp went eight days without sleep. A few months later, another disc jockey in Honolulu reportedly cranked past 10 days. Gardner believed without a doubt he could exceed both records, according to a 2017 NPR report. Indeed, he went a full day longer: an incredible (and likely painful) 11 days, or 264 hours.

The high schooler’s David Blaine-esque stunt won him first place at the science fair and a mention in the scientific annals on the alarming effects sleep deprivation has on the body. But unlike Gardner, most of us are trying desperately to get more sleep, and higher quality rests at that. In fact, the last several decades have ushered in the field of sleep medicine and the immense role that a good night’s rest plays in our overall health and well-being.

However, as a society, we still aren’t getting enough sleep. According to one study published in the Journal of the American Medical Association this month, 30 percent of Americans age 20 and older who were surveyed between 2017 and 2020 reported trouble sleeping or staying asleep, and 27 percent complained of daytime sleepiness. Around 70 million Americans suffer from chronic sleep conditions such as sleep apnea and insomnia, according to the Centers for Disease Control and Prevention.

With fitness trackers all the rage now, it’s no surprise that folks are turning to them to overhaul their sleep. Popular ones include applications within Fitbits, Oura Rings, and Apple Watches. In a 2022 survey conducted by Sleep Junkie, 37 percent of more than a thousand polled reported using sleep tracking technology and quite frequently.

The undeniable allure of wearable technology is having personalized data that can be immediately actionable. Studies have shown that health and fitness trackers can encourage exercise and weight loss. But is the same true for sleep? Not really, sleep experts tell Inverse. In fact, it turns out devices meant to track sleep come up woefully short, and for some, it can actually create anxiety around sleep, potentially making getting a good night’s rest even harder. Despite this, sleep researchers do have hope that there may still be benefits to these trackers after all — you just need to know what to focus on and, of course, you have to put in the work.

What happens during sleep?

To understand how sleep trackers work, we first need to tease apart what happens — particularly in the brain — during sleep.

There are two different types of sleep your brain cycles through, Philip Gehrman, an associate professor of clinical psychology and psychiatry at the University of Pennsylvania who specializes in behavioral sleep medicine, tells Inverse. One is rapid eye movement (REM) sleep, where, as the name suggests, your eyes are moving around in all sorts of directions. But since they’re closed, they aren’t sending any information to your brain. The other is non-REM (NREM) sleep, which precedes REM and consists of three stages designated as N1, N2, and N3, with N1 being considered light sleep and N3 the deepest sleep. Approximately 75 percent of sleep is spent in NREM, mostly in N2.

While we experience changes in our heart rate, body temperatures, and body movements going from one stage of sleep to the other, what truly distinguishes NREM and REM is brain activity.

“When people are still awake but drowsy, you see what’s called alpha waves,” explains Gehrman. But as you enter N1, or the light sleep, these change into theta waves and then into rapid bursts of brain activity called spindle fibers once you hit N2.

In N3, the deepest NREM sleep stage, brain activity becomes slower and more rhythmic and is characterized by delta waves. This slow-wave activity is thought to be important for restoration, prompting our bodies to flush out harmful debris that could cause neural damage as well as strengthen the immune system.

When our brains transition to REM, there’s a flip back to theta waves, which scientists believe is important for our processing information and making memories. An average sleep cycle lasts about 90 minutes, and ideally, you need about four to six cycles of NREM and REM every 24 hours to feel rejuvenated. The REM sleep at the beginning of your slumber tends to be short, but it gets longer as the night progresses; NREM, on the other hand, gets briefer.

Because NREM and REM are so crucial, you’d need to take both into account to say anything about your sleep quality. To do that, however, you need to measure brain activity, the gold standard approach by which is polysomnography, also known as a sleep study. Polysomnography is a comprehensive, non-invasive way for clinicians to see the big snoozy picture, monitoring not only brain waves but blood oxygen levels, heart rate, breathing, and eye and muscle movements.

“It’s not actually accurate to call [these devices] sleep trackers...They not measuring sleep.”

And they can often miss the mark by quite a lot, Jamie Zeitzer, an associate research professor of psychiatry and sleep medicine at Stanford University, tells Inverse.

“We did a study a few years ago [where] we looked at these devices in people who have brain injuries, and they’re waking up quite a bit. These devices were saying ‘Oh, they’re sleeping seven hours,’ but a polysomnography was saying they’re sleeping three to four hours,” says Zeitzer.

Researchers at the University of North Carolina, Chapel Hill, and the nonprofit RTI International came across similar results in a review of 22 studies involving wearable fitness and sleep trackers conducted in 2015. They found that compared with polysomnography, the wearables tended to overestimate total sleep time and sleep efficiency.

“These devices do pretty well if you can accept that they are still less [accurate] than polysomnography,” Robert Furberg, study co-author and a senior clinical informaticist at RTI International, told Neurology Today in 2021.

Probably more problematic is that these devices aren’t validated or regulated by the Food and Drug Administration; they aren’t even considered health-related but rather lifestyle or entertainment devices.

“Every one of these devices doesn’t go through FDA’s approval,” says Gehrman. “They’re

marketed as consumer wearables, not as health care devices. They have potential to screen for sleep disorders, but now you’re moving into the realm of clinical diagnosis, which most [of these] companies have intentionally swayed away from.”

To be approved for diagnosis, these devices would have to undergo extensive clinical trials required by the FDA just like with any pharmaceutical drug or vaccine (not to mention including more metrics to more accurately estimate sleep).

“[These companies] aren’t willing to move into the area of seeing what clinical use their devices have,” says Gehrman. “I think [sleep trackers] have tremendous potential that is unrealized because [companies] don’t want to deal with the FDA.”

This tremendous potential includes providing insights into sleep patterns that may indicate an underlying disorder like sleep apnea and may nudge some folks to get themselves formally evaluated. Still, the American Academy of Sleep Medicine recommended clinicians exercise caution when dealing with sleep trackers: “Given the lack of validation and [FDA] clearance, [consumer sleep technologies or CSTs] cannot be utilized for the diagnosis and/or treatment of sleep disorders at this time. However, CSTs may be utilized to enhance the patient-clinician interaction when presented in the context of an appropriate clinical evaluation. The ubiquitous nature of CSTs may further sleep research and practice. However, future validation, access to raw data and algorithms, and FDA oversight are needed.”

The potential to improve — but also worsen — sleep issues

So should you chuck your sleep tracker for good? Zeitzer says the data by itself isn’t helpful, but if it’s contextualized by associating lifestyle choices like alcohol use or environmental factors like ambient temperature, that’s where it can benefit some folks and help improve sleep hygiene.

“There are other ways to integrate other pieces of data to contextualize that sleep data, but decontextualized, I don’t think [data from sleep trackers] is actually that interesting,” he says.

“People need to understand there’s limits to the accuracy of these devices and they should not be treated as absolute truth. They can provide useful information but should always be taken with a grain of salt.”

This is something Alan Forde, 67, of Mississauga, Canada, has noticed with his Oura Ring, which he’s had since July 2021.

“The ring helped. But of course not by itself,” he wrote in an email to Inverse. “It [gave] me the proof and encouragement to test changes to better my sleep (darken room, cooler [temperatures], alcohol, food timing, bed time).”

Jackie of Cleveland, Ohio, agreed that their sleep trackers — first the Oura Ring two to three years ago and then the Whoop band — have been plenty helpful illuminating the connections between their lifestyle and sleep.

“It [made] me painfully aware of how badly alcohol affects my sleep,” they noted in a thread on Reddit.

While Gehrman doesn’t recommend consumer sleep trackers to his patients, he says if you do use them, be wary of the data and don’t get too anxious about it because for some, worrying can lead to the opposite issue: a condition called orthosomnia, coined in 2017, in which your obsession for perfect sleep creates a maelstrom of stress and, ironically, poor sleep.

“Sometimes people will say they woke up feeling great [but] their tracker will tell them no, they slept poorly, so therefore, they must have slept poorly,” he says. “People need to understand there’s limits to the accuracy of these devices and they should not be treated as absolute truth. They can provide useful information but should always be taken with a grain of salt.”