Perception is "shaped by our entire mental world." 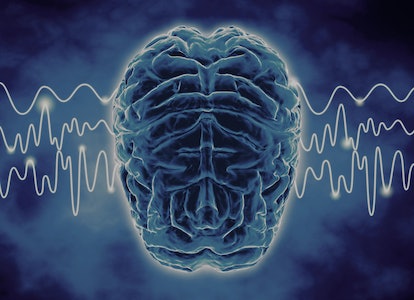 Scientists believe they've discovered the roots of a powerful, biological phenomenon. Biases that are baked both our brains and our society – from social stereotypes to search engines – begin with one type of brain wave, suggests new research.

Brain images taken from 24 people suggest that a biased decision is tied to alpha waves — oscillations in brain activity that occur about 10 times each second. A study published Monday in The Journal of Neuroscience suggests that when alpha waves are weak, people are more likely to act against their internal bias. When those waves are strong, they tend to succumb to them.

This study gives us a meta-view of how our brains work, first author Laetitia Grabot, a postdoctoral researcher at Bielefeld University in Germany, explains. Brains are not "passive devices" but rather "active machines" that are constantly creating blueprints in our heads.

"Perception is not only determined by physical information from the senses but is strongly shaped by our entire mental world, such as preconceived ideas, internal patterns, prior knowledge," she tells Inverse.

"It is because everyone has their own "schematics and blueprints" that each of us is unique and perceives the world in her or his own way — slightly different from that of our neighbors."

In turn, Grabot's research suggests that the strength of alpha waves can reveal whether we are sticking to our internal blueprint (and all its baked-in biases) or deviating from it.

The importance of alpha waves

Alpha waves, in general, occur when neurons in the forefront of the brain fire in tandem with one another (they're often pulsing through our brain during relaxed, awake states, like meditation). Past work suggested that alpha waves are related to how we perceive the world — they affect visual and audio perception, for instance. That led to the idea that they're involved with whether we're seeing reality for what it actually is.

However, Grabot explains that her work suggests that alpha waves are more attuned to our biases about the world, rather than simply reacting to how things actually are.

"We show in our work that alpha waves are not predicting how correct our perception will be, but more whether we will follow, or not, our internal biases, independently of the response's accuracy," she explains.

To examine how alpha waves affect our perceptions, Grabot and her team asked 24 people to look at pictures and listen to a series of tones, which were staggered by a nearly imperceptible distance of 20 to 250 milliseconds. Then, the participants had to guess which came first — a tone or a picture. Those who consistently saw the pictures first (even if they weren't actually presented first) were grouped as biased towards images. Those who saw sounds were biased towards audio.

The whole time, the team took images of their brains to analyze how alpha waves behaved during that process.

How does this apply to bias in real life?

In the lab, bias may be represented in flashes and sounds. In the real world, biases affect how people are treated in healthcare settings, why we get sucked into conspiracy theories, and how we seek out information. For example, take confirmation bias: that's the idea that you tend to seek out information that confirms your pre-existing worldview, and reject that which doesn't belong.

"I think that self-introspection would help more to detect one own's bias than recording and looking at your brain waves."

While this study is a long way away from connecting the dots between alpha waves and our biased systems and behavior, Grabot suggests that this mechanism could explain how these biases work on the level of cells in the brain.

"My bet would be — but this is only my personal thought and not a scientific fact — that alpha waves could play a similar role in some more complex cognitive biases at least, like biases in judgment or attention maybe, like the confirmation bias," she says.

That said, more research is needed to back these claims, she says.

For now, her study suggests that scientists can at least watch our brains grapple with bias – even if we're not sure what to do with that information quite yet. If you're looking to understand your bias a bit better, this study peels back the curtain just a bit, Grabot says.

If you're looking to combat it, though, you may be better off searching your heart rather than your head.

"I think that self-introspection would help more to detect one own's bias than recording and looking at your brain waves," she says.

Abstract: Biases in sensory perception can arise from both experimental manipulations and personal trait-like features. These idiosyncratic biases and their neural underpinnings are often overlooked in studies on the physiology underlying perception. A potential candidate mechanism reflecting such idiosyncratic biases could be spontaneous alpha band activity, a prominent brain rhythm known to influence perceptual reports in general. Using a temporal order judgement task, we here tested the hypothesis that alpha power reflects the overcoming of an idiosyncratic bias. Importantly, to understand the interplay between idiosyncratic biases and contextual (temporary) biases induced by experimental manipulations, we quantified this relation before and after temporal recalibration. Using EEG recordings in human participants (male and female), we find that pre-stimulus frontal alpha power correlates with the tendency to respond relative to an own idiosyncratic bias, with stronger alpha leading to responses matching the bias. In contrast, alpha power does not predict response correctness. These results also hold after temporal recalibration and are specific to the alpha band, suggesting that alpha band activity reflects, directly or indirectly, processes that help to overcome an individual’s momentary bias in perception. We propose that combined with established roles of parietal alpha in the encoding of sensory information frontal alpha reflects complementary mechanisms influencing perceptual decisions.

More like this
Mind and Body
8.3.2022 11:30 AM
The brain’s memory hub may explain why some people get PTSD and others don’t — study
By Miriam Fauzia
Mind and Body
8.4.2022 3:01 PM
Genetically engineered gut bacteria boost long-term metabolic health — mouse study
By Allison Parshall
Mind and Body
8.7.2022 2:00 PM
Living near one neglected piece of urban eye candy can greatly boost mental health
By Sarah Sloat
Related Tags
Share: