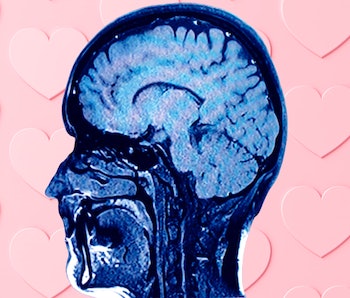 Valentine's Day is the teaser trailer for the actual time of year when love, and the pursuit of love, takes centerstage: spring. Spring signals new beginnings — and spring fever signals new relationships. In turn, novelty triggers the release of dopamine, which experts say is around aplenty in spring.

But what happens if your love life is less about spring fever and more about old flames? According to a 2012 study titled “Neural correlates of long-term intense romantic love,” couples who are still very much in love after an average of 21 years of marriage still have brains that are flooded with dopamine. This is because these types of couples have brains with an especially active ventral tegmental area (VTA) — and the VTA is one of the two major dopaminergic areas in the brain.

That study scanned the brains of long-term spouses and compared those to the brain scans of people who had fallen deeply in love just within the past year. Their brain activity was measured while they either viewed a photograph of their partner, a closer friend, an acquaintance, or someone they sort of know.

These scans revealed that the brains of both groups showed clear similarities when they examined the photos of their partners: When they gazed upon their special people, the VTA was especially activated. They also found that relationship length was significantly associated with increased activity in the ventral and dorsal striatum (the parts of the brain that correlate with attachment bonds), and sexual frequency was positively associated with activity in the posterior hippocampus (a part of the brain linked to cravings).

First author Bianca Acevedo, a social neuroscientist and researcher at the University of California, Santa Barbara, tells me that this finding — that the VTA is linked to experiencing romantic love — remains robust. In an upcoming paper, Acevedo and her colleagues found that the VTA is also involved in the maintenance of romantic love when it comes to newlyweds.

Acevedo explains that the VTA is a “very primary system” that we use for basic rewards, ranging from food-seeking to mating. Simply thinking of your partner becomes a rewarding experience that activates that region — and when you continue to have a good relationship, that fuels the system.

What Acevedo continues to examine is whether neuroscience can explain why couples stay in love. That story, Acevedo explains, is “still emerging.” Part of the answer, she says, could come down to the actual relationship with the partner — the conditions of that relationship and the interactions involved. But long-term love may also have something to do with genes, Acevedo says.

It’s established that humans are hardwired for sociality, altruism, and empathy. But Acevedo’s research indicates that, when it comes to certain behaviors exhibited by people in the context of romance, those factors may be influenced by their genetics. So, while we’ve evolved to seek out pair-bonding, there is variation when it comes to things like sexual satisfaction and the ability to sustain feelings of romantic love.

“I think that, for couples, when they observe certain tendencies in themselves or their partners, it’s helpful to know that they may be influenced by their genetics,” Acevedo says. “It’s important for us to understand that so we can best navigate the world of love and not be so hard on ourselves and others when things aren’t going the way they thought they would.”

Acevedo points out that modern romantic love is an especially unique concept because it’s a package of a scientific concept (pair bonding) and complex social norms, like marriage. Ultimately, we’ve evolved to form relationships because they help us survive. Different relationships work for different people — but regardless of what form it takes, evidence of these relationships will show up as bursts in the brain.