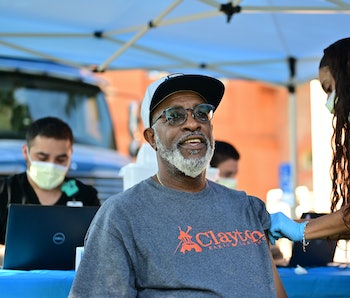 On September 1, 2022, the Centers for Disease Control and Prevention endorsed the use of updated Covid-19 booster shots that are specifically tailored to combat the two most prevalent Omicron subvariants, BA.4 and BA.5. The decision comes just a day after the Food and Drug Administration’s emergency use authorization of the shots. The CDC’s backing will enable a full roll-out of the reformulated vaccines to begin within days.

The new booster shots — one by Moderna and another from Pfizer-BioNTech — come as more than 450 people are still dying of Covid-19 every day in the U.S.

As of August 31, 2022, only 48.5 percent of booster-eligible people in the U.S. have received their first booster shot, and just under 34 percent of those eligible have received their second. These low numbers may, in part, be influenced by people waiting for the newer versions of the vaccines to provide better protection. But booster shots have proven to be an essential layer of protection against Covid-19.

Prakash Nagarkatti and Mitzi Nagarkatti are immunologists who study infectious disorders and how vaccines trigger different aspects of the immune system to fight infection. They weigh in on five key questions about how the updated booster shots train the immune system and how protective they might be against Covid-19.

5. What is different about the updated booster shots?

The newly authorized shots are the first updates to the original Covid-19 vaccines that were introduced in late 2020. They use the same mRNA technology as the original vaccines. The key difference between the original Covid-19 shots and the new “bivalent” version is that the latter consists of a mixture of mRNA that encodes the spike proteins of both the original SARS-CoV-2 virus and the more recent Omicron subvariants, BA.4 and BA.5.

The inability of the original vaccine strains to prevent reinfection and trigger long-term protective immunity prompted the need for reformulated vaccines.

4. How does a bivalent vaccine trigger an immune response?

In an actual Covid-19 infection, the SARS-CoV-2 virus uses its protruding spike protein to latch onto human cells and gain entry into cells. The spike protein triggers the production of so-called neutralizing antibodies, which bind to the spike protein and prevent the virus from invading other cells.

But when the virus mutates, as we know that it does, the antibodies that were previously produced in response to the virus can no longer effectively bind to the newly mutated spike protein. In this respect, the SARS-CoV-2 virus acts like a chameleon — a master of disguise — by changing its body configuration and escaping recognition by the immune system.

The ongoing viral mutations are why antibodies produced in response to the original vaccine strains have, over time, become less effective at fending off infections by new variants.

3. How protective will the new shots be against infection?

There are, as of yet, no human studies on the efficacy of the new bivalent vaccine at preventing reinfections and providing long-term immune protection.

However, in human clinical trials and laboratory studies, both Pfizer-BioNTech and Moderna found that their initial version of the bivalent vaccine, which was directed against the original SARS-CoV-2 virus and an earlier Omicron strain, BA.1, induced a strong immune response and longer protection against both the original strain and the BA.1 variant. In addition, the companies reported that the same early combination generated a significant antibody response against the newest Omicron subvariants, BA.4 and BA.5, though this antibody response was lower than that seen against subvariant BA.1.

Based on those results, in spring 2022, the FDA rejected the BA.1 bivalent boosters because the agency felt the boosters might fall short of providing sufficient protection against the newest strains, BA.4 and BA.5, which were by then spreading quickly throughout the U.S. and the world. So the FDA asked Pfizer-BioNTech and Moderna to develop bivalent vaccines specifically targeting BA.4 and BA.5 instead of BA.1.

Because clinical trials are time-consuming, the FDA was willing to consider animal studies and other laboratory findings, such as the ability of antibodies to neutralize the virus, to decide whether to authorize the bivalent boosters.

This decision has stirred up controversy over whether it is appropriate for the FDA to approve a booster without direct human data to support it. However, the FDA has stated that millions of people have safely received the mRNA vaccines — which were originally tested in humans — and that the changes in the mRNA sequences in the vaccines do not affect vaccine safety. Thus, it concluded that the bivalent vaccines are safe and that there is no need to wait for human clinical trials.

It is also noteworthy that influenza vaccines are introduced each year based on the prediction of the strain that is likely to be dominant, and such formulations do not undergo new clinical trials.

Based on available evidence from the previous Covid-19 vaccines, we believe it is very likely that the new boosters will continue to offer strong protection from severe Covid-19 leading to hospitalization and death. But whether they will protect against reinfection and breakthrough infections remains to be seen.

2. Will it only be a booster shot?

The new bivalent vaccines contain a lower dose of mRNA and, as such, are meant to be used only as boosters and not in people who have never received a Covid-19 vaccination.

1. Will the new shots protect against future variants?

How well the bivalent vaccines will perform in the face of new variants that might arise will depend on the nature of future spike protein mutations.

If it is a minor mutation or set of mutations when compared to the original strain or to Omicron variants BA.4 and BA.5, the new shots will provide good protection. However, if a hypothetical new strain were to possess highly unique mutations in its spike protein, then it’s likely that it could once again dodge immune protection.

On the flip side, the successful development of the updated vaccines demonstrates that the mRNA vaccine technology is nimble and innovative enough that — within a couple of months of the emergence of a new variant — it is now likely possible to develop and distribute new vaccines that are tailor-made to fight an emerging variant.

This article was originally published on The Conversation by Prakash Nagarkatti and Mitzi Nagarkatti at the University of South Carolina. Read the original article here.